This was the second consecutive quarter of negative US GDP growth (1Q22=-1.6% QoQ annualised), which would be considered a recession in most countries. However, the official definition of a recession in the US (as adjudicated by the National Bureau of Economic Research [NBER]) involves other factors, including conditions of employment. Thus, it is unlikely that the US is officially in a recession given its strong labour market and that the negative 1Q22 number was primarily a function of higher-than-normal imports. Imports are included in the GDP calculation as a detractor of domestic economic activity but are clearly not a sign of weak underlying economic activity.

GDP is always quoted in real (i.e., above inflation) terms, so prices were up 8.7% QoQ annualised despite the negative real number. Thus, the US economy actually grew by c. 7.8% QoQ in nominal terms. In 1Q22, underlying economic activity in most sectors was quite strong, and it was essentially a surge in imports that dragged US quarterly economic activity into negative territory.

However, in 2Q22, there were more concerning trends in underlying economic activity, including:

Figure 2: Contribution to US economic activity in 2022 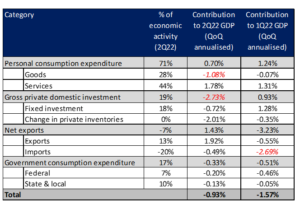 Consumer spending (accounting for c. two-thirds of US economic activity) remained strong, contributing 0.7% to the QoQ annualised GDP growth. Although we note that this happened with growth slowing sequentially over the last few quarters and now being well below the pre-pandemic run-rate as a combination of soaring inflation and higher interest rates start to weigh on US consumers (see Figure 3).

Figure 3: Personal consumption expenditure (the bulk of US economic activity) is still positive but slowing 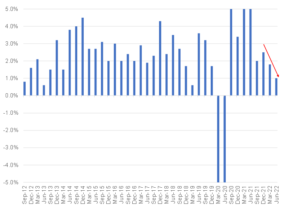