SA’s latest inflation print for June, released on 20 July, came in at 7.4% YoY, up from 6.5% YoY in May. The main contributors to the 7.4% annual inflation rate were food and non-alcoholic beverages; housing and utilities; transport; and miscellaneous goods and services – once again all the usual suspects. Core inflation (excluding the volatile categories of food and energy costs) remains moderate at 4.4% YoY. It is worth noting that, at this level, core CPI inflation is modest by its historical standards and, critically, still below the mid-point of the target range. Market reaction to the print has thus far been fairly positive – domestic bonds have seemingly rallied off the back of the inflation release as the local market appears to have priced in a far worse scenario than was delivered. Considering one of the key drivers of inflation this year, the oil price, which has risen to 14-year highs amid sanctions on Russia, has now fallen from its June peak of US$119/bbl but is still above the US$100/bbl mark. Oil prices have slowed of late as signs of a potential demand-reducing global recession fed through to financial markets. 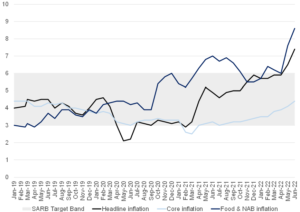 However, the weaker oil prices have not yet resulted in relief for South African consumers, who had to contend with yet another petrol price increase in July. Nonetheless, according to the Automobile Association of South Africa, August may offer local consumers some respite, with fuel prices expected to drop across the board. The decline in international crude oil prices is driving these decreases but they are being offset by a weaker rand to the US dollar exchange rate. Overall, while considerable pipeline pressure still needs to filter through to retail prices, commodity prices retreating, nevertheless, reinforces our view of the moderation we foresee in 2023, notwithstanding the uptrend currently underway in core and services inflation.

Interestingly, the SA Reserve Bank (SARB) somewhat surprised markets following its latest Monetary Policy Committee (MPC) meeting on Thursday (21 July) by strongly front-loading the current interest rate hiking cycle and increasing the repo rate by 75 bpts to 5.5%. This was the sharpest rate hike in c. 20 years and ahead of market expectations (the market had largely priced in a more moderate hike of 50 bpts).

At this point, it appears to us that this latest front-loaded rate hike has been driven largely by global factors. With the Russia/Ukraine war likely to continue with no real end in sight, the SARB is seemingly concerned that the war may have a significant further impact on global prices, thus leading to a longer, more protracted, and heightened inflationary environment. Furthermore, although policy settings in advanced economies remain broadly accommodative, the SARB is acutely aware that policy normalisation by major central banks has accelerated, and higher yields are tightening global financial conditions. Currently, the SARB is largely taking its cues from international factors.

However, there are also a few local factors causing alarm for the SARB – it appears to be particularly concerned about inflation expectations, and the pass-through impact on wages and consumer prices in general. Eskom’s recent wage increase of 7% would likely have caused concern around possible further upside inflationary pressures stemming from additional public sector wage increases. Overall, the tone of the statement following this latest meeting was very hawkish and Thursday’s decision definitely comes across as a ‘statement hike’ on the part of the SARB, in order to make clear its credibility.

Off the back of this interest rate announcement, local bonds rallied strongly, whilst the rand vs US dollar exchange rate remained fairly muted. While rising interest rates will cause bond values to decrease over the short term, eventually these declines will be more than offset as bonds mature and can be reinvested for higher yields. Thus, higher interest rates make bonds a more appealing investment, often driving prices up and yields back down. 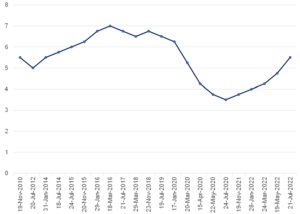 The timing of the remaining rate hikes for 2022 is now more uncertain, and we will need further, clearer data and indications around both current global and local trends (i.e., more recent global and local inflation numbers, the US Federal Reserve’s next interest rate decision etc.) over the next month or so until the picture becomes a little clearer for 3Q22. At the end of the day, there is a limit as to how high rates can go and the SARB has to be cognisant of the detrimental impact of a rate-hiking cycle that is too severe on SA’s already strained economy – the average consumer remains under increasing price pressures along with the country’s sustained high unemployment rate. Overall, it is a difficult balance to achieve, and the SARB will be walking a tightrope for the remainder of 2022.