SA 1Q22 GDP: Better-than-expected and back at pre-pandemic levels 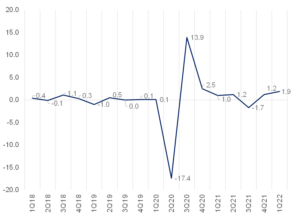 South Africa’s (SA’s) economic recovery from the depths of the pandemic-induced lockdowns has generally been faster than anticipated, and some of that momentum has clearly carried over into 1Q22, with the latest GDP print coming in ahead of most forecasts at 1.9% QoQ. This is the second consecutive quarter of GDP growth. The latest (1Q22) Stats SA GDP data, released on Tuesday (7 June), show that the size of the SA economy is now at pre-pandemic levels, with real GDP slightly higher than what it was before the COVID-19 pandemic. YoY, unadjusted GDP was up 3%. Nominal GDP for 1Q22 stood at c. R1.59trn, with the biggest moving sectors being agriculture (up by R20bn to R38bn) and the electricity sector, which was R2bn higher at R43bn. Conversely, the biggest declines were recorded in the trade sector (falling by R12bn to R187bn), and mining, which dropped by R15bn to R108bn. 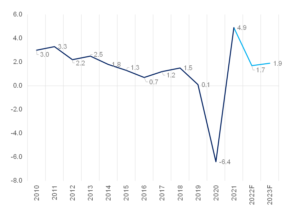 Eight out of the ten sectors recorded growth with the key drivers of the latest growth rate being the manufacturing (+4.9% QoQ), trade (+3.1% QoQ), and finance (+1.7% QoQ) sectors, each contributing 0.6%, 0.4%, and 0.4%, respectively, to the quarterly print. Interestingly, the mining sector (which up until now has been a key contributor to the SA economy amid the recent revenue windfalls which have been driven by elevated commodity prices) contracted by 1.1% QoQ and 4.1% YoY, with platinum group metals (PGMs), gold and iron ore having the biggest negative impact. This poor performance from the mining sector is largely unsurprising, given that 1Q22 mining output suffered interruptions from heavy rainfall and industrial action.

Looking ahead to 2Q22, the general economic outlook looks clouded due to the slowdown in economic activity in SA’s key trading partner countries due to the ongoing war in Ukraine, as well as lockdown restriction (although now easing) brought about in China by that country’s zero-COVID policy. In addition, we expect the higher interest rate trajectory to be a drag on household consumption and thereby domestic GDP growth. Furthermore, the recent floods in KwaZulu-Natal also pose a risk to growth. The flooding occurred during 2Q22 in April and May and will only reflect in the 2Q22 GDP results release due in September. The damage to key infrastructure (such as the collapse of bridges, damage to roads, ports, etc.) is likely to hinder economic activity and disrupt the transportation of goods. Further compounding the matter is the various security issues and bottlenecks on Transnet’s railway and ports, which is likely to negate the impact of the positive terms of trade shock on real GDP growth.

If you have any questions or would like to discuss the subjects raised in this article with someone at Anchor please email us at [email protected].