Looking through the global volatility: The SA rate-hiking season is upon us

As we move into 2Q22, the global monetary environment faces levels of economic volatility and uncertainty that few of us could have ever imagined at the time of writing our 1Q22 Navigator article entitled The outlook for SA interest rate hikes in 2022 – a shift to normalisation?, dated 15 January 2022. As we write this latest article, more than a month has passed since Russia invaded Ukraine and the war shows little sign of ending anytime soon. Overall, the response by largely Western nations has been substantial, coordinated, and committed but Russia remains unwavering in its ambitions for Ukraine. While global hope for a more peaceful resolution remains, it will not be easy (or necessarily quick) to attain, and markets have now begun to reflect this. Aside from the terrible costs to human life which the war is taking, the key international question remains: What impact will the conflict have on the global economic outlook? Further pressure is clearly being levelled on the cost of living, especially given the surge in commodity prices. Energy prices have been the central focus, but food security is an important issue too and could have unforeseen consequences. For example, Egypt recently requested assistance from the International Monetary Fund (IMF) in response to spiking food prices and its dependence on Ukrainian wheat imports. Notably, Egypt is not alone in this regard.

Consequently, the latest SARB MPC meeting (held on 24 March) took place against a backdrop of heightened uncertainty about the direction of the oil price, inflation, global growth, and the Fed’s more aggressive frontloaded rate-hiking trajectory. The rand, however, has been resilient, supported by higher commodity prices. As expected, the SARB continued its gradual rate-hiking cycle and increased the repo rate by 25 bpts to 4.25%. However, the debate notably shifted from being between no hike (preferred by one MPC member) and a 25-bpt rate hike (preferred by four members) in January to being between a 25-bpt rate hike (preferred by three members) and a 50-bpt rate hike (preferred by two members) in March. This indicates a clear shift towards a generally more hawkish view by the MPC. Whilst a hawkish statement was widely anticipated, it was even more hawkish than expected. This can largely be attributed to a combination of factors: 1) the bank’s elevated 5% average core inflation forecast in 2023; 2) the bank’s expectation that the output gap will now close faster (in response to upward growth forecast revisions); and 3) the sizeable lift in surveyed inflation expectations even ahead of the war-induced food and fuel price spikes. Thus, the expected cumulative hikes this year will, to a large extent, depend on the evolution of the war in Ukraine. The shorter the war, the quicker the recent fuel and food price spikes should reverse (at least partly). The SARB seems to be leaning towards a reasonably protracted war that is largely inflationary.

Based on the SARB’s revised forecast, the bank’s initial judgement is that the global stagflation shock brought about by Russia’s invasion of Ukraine will have a much more pronounced impact on driving domestic inflation higher than curtailing local real GDP growth. In the media Q&A session following the repo rate decision, SARB Governor Lesetja Kganyago highlighted that, because of a ‘multiplicity’ of external price shocks (pandemic-related supply chain bottlenecks, as well as a persistence in rising global food and energy prices), the risk of broader (second-round) price pressures have increased. The governor further stated that while the split MPC voting is to be expected, given a highly uncertain outlook, it also reflected the ‘worry’ amongst MPC members about the deteriorating inflation outlook. Not surprisingly, in terms of magnitude, the most significant upward revision in March was for an increase in headline CPI during 2022. The SARB’s inflation forecast was revised higher because of the higher oil and food price assumptions, with headline inflation now expected to breach the upper end of the inflation target at an average of 6.2% in 2Q22, returning to around the midpoint of the target during 2023. The 2022 average for headline CPI inflation was revised higher to 5.8% from 4.9% before and was also revised marginally higher to 4.6% for 2023 and 2024. Considering the much higher oil price since the January MPC meeting, a notable upward revision was expected. On a balance of various probabilities, it is still reasonable to assume the possibility that the Russia/Ukraine war could be over in the next few months. This should at least partly reverse the inflationary fuel and food price spikes, and ultimately the inflation trajectory will benefit from the strong, favourable base effects that these spikes are now creating. 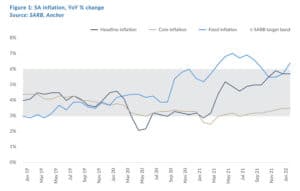 The SARB’s revised real GDP growth forecast for 2022 was somewhat surprising. Despite lowering its global real GDP outlook meaningfully by 0.7 ppts to 3.7%, the bank raised its SA growth forecast to 2% in 2022 (from 1.7%). This is on account of the somewhat better-than-expected SA real GDP growth in 2021 (i.e., implying a slightly better starting point), an upward revision to quarterly growth in 1Q22, and the expected boost from much higher export commodity prices. At 1.9% for 2023 and 2024, the growth outlook beyond 2022 is similar to the SARB’s January forecasts, with medium-term growth risks seen as being balanced 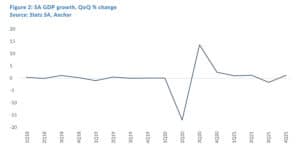 A sharp upward revision to the SARB’s non-oil commodity price forecast for 2022 saw a major adjustment to the outlook for the current account balance. At a projected 3% of GDP, the current account is expected to remain in a healthy surplus after recording a 3.7% of GDP surplus in 2021. As the SARB reiterated, if it materialises, the sizeable surplus on the current account should continue to shield SA from likely volatile foreign capital flows amid accelerated global policy and long-term interest rate normalisation. Nonetheless, our interpretation and analysis of the SARB’s latest forecasts, MPC statement, and Q&A session are that there is a high level of uncertainty attached to the medium-term forecast. Risks to inflation remain to the upside. These include inflation expectations, which tend to be backward-looking, and wage settlements, especially in the public sector. National Treasury has carried over the R20bn gratuity paid in 2021, with wage negotiations having commenced in 2Q22. The uncertain outlook and upside risks to the forecast imply that policy decisions will remain data-dependent, as the SARB reiterated in the latest MPC statement.

Governor Kganyago warned against “inflation exceptionalism in SA” when inflation is accelerating in the rest of the world. The MPC remains focused on inflation expectations and second-round effects embedded in core CPI inflation. Unsurprisingly, the money market became even more hawkish after the MPC meeting, with the preference of nearly half the MPC members for a larger adjustment strengthening this market’s conviction that steeper rate hikes are coming. The monetary policy statement was also positive for the rand and bonds. Whilst in this current volatile global environment uncertainty is indeed the only certainty there is, the unpredictability of the war, in our view, supports gradual rate hikes against the current economic backdrop and forecasts. We doubt that a 50-bpt rate hike will curb inflation or inflation expectations more than two 25-bpt rate hikes, while it may weigh on a still fragile growth recovery that could ultimately be curbed even further depending on how the war unfolds.

Therefore, considering the March rate increase, we forecast another 75 bpts of repo rate hikes (25 bpts each in May, July, and September 2022). This will bring the repo rate to 5% by the end of 2022. We also acknowledge the risk of a frontloaded 50-bpt rate hike in May should more concrete signs of second-round domestic price effects emerge. Conversely, while SA growth momentum appears to have been robust in early 2022, we remain concerned that growth could potentially soften materially from 2Q22 onwards as the combined impact of higher inflation and interest rates start to squeeze household income and non-commodity export volumes feel the drag of softer global growth. Nonetheless, we still expect the repo rate to rise to at least 6% over the next two years, although the unpredictability of the war in Ukraine makes it particularly hard to forecast the exact timing of each rate hike. 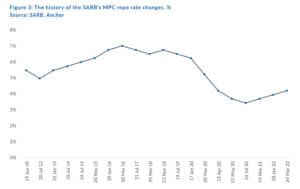