Anchor’s approach to investing in equities

After a remarkably steady recovery in global markets from their initial COVID-induced panic in March 2020, oiled by extremely accommodative monetary and fiscal policy globally, the volatility experienced in the closing months of 2021 may prove to be the trailer for the next season of where markets are headed. As 2022 kicks off, a number of factors are conspiring to create conditions for a period of continued turbulence ahead, including: (1) policy accommodation, which has been so positive for asset prices, is being steadily withdrawn and interest rates seem set to move higher; (2) with a few exceptions (tourism and travel, for example) companies’ earnings have largely recovered from the lockdown-induced collapse in 2020 – from here, some disappointment risk exists for companies unable to pass on current inflationary cost pressures to their customers; and (3) as Figure 1, which shows the current price of world equities as a multiple of expected earnings in 12-months’ time, illustrates, equity valuations have moderated a bit as earnings have recovered but still remain elevated relative to their history.

It is not all bad news though. If one thinks of the world’s economy as being on a dimmer switch, as the world emerges from the restrictions imposed due to COVID-19, from an economic perspective, it is the equivalent of the dimmer switch being steadily turned up. This implies a strong global growth backdrop, which is typically supportive for equity markets. Taken together with the headwinds discussed above, it is very conceivable that we may experience an emotionally taxing “love-hate” relationship with equities for several months to come, depending on which force is front of mind. It is an environment in which, without the rising tide of the broader market lifting all boats so to speak, investors will need to rely more heavily on stock selection to generate returns. The March 2020 COVID-19 scare aside, after what has been an extended run of strong returns from global equities, many investors are no longer accustomed to the rigours and discipline of grinding it out in a less supportive market. Investment philosophy and the courage to stick to it will be tested. As we face this prospect, it is an opportune time to remind readers of our investment principles here at Anchor.

What is our objective?

Our aim is to grow our clients’ assets in real (meaning above inflation) terms, in a consistent manner over time, while limiting trading costs as far as possible. Investing in equities means returns are likely to be bumpy at times but, as we explain below, our focus on quality is likely to smooth out the bumps, particularly in more challenging times.

Although we would expect that our approach to selecting stocks will lead to outperformance of the broader market over the long term, we accept that, if one remains true to an investment philosophy, there will be periods of underperformance. Indeed, as we have seen market indices becoming increasingly influenced by a handful of mega-cap stocks, we think focus on short-term outperformance of such benchmarks carries a great deal more risk than many investors realise. SA investors have become familiar with how individual stocks can have an outsized influence on a market, given the experience with Naspers, which grew to level where it accounted for >20% of the entire SA market. We are seeing more examples of this internationally – for example, although the Nasdaq has c. 3,200 companies listed, the top-10 account for slightly under 50% of the index.

We seek companies that have a consistent track record of generating a superior return on capital employed (ROCE) – seeking to benefit from the principle once claimed by Albert Einstein as the eighth wonder of the world – compound interest! These are companies that are not only able to generate a high return on the capital they deploy but are also able to reinvest the capital that they generate at a similarly high level of return. They tend to be dominant players in the industry in which they operate. They are businesses that have already won and use the superior returns they generate to entrench themselves further relative to weaker competitors. They have what investors refer to as a strong competitive moat.

In Figure 2 below, we compare the investment performance of several high ROCE compounders (shades of green) with that of several low return or cyclical businesses. In the low-return group, we have included Vestas, which is a large player in the manufacture of wind turbines. Although the appeal of the renewable energy theme has caught on among investors in recent months, which has resulted in a significant rise in share prices of many companies associated with this theme, the low returns on capital that Vestas has generated mean that even with the share having benefitted meaningfully from its association with the renewable energy theme, its longer-term investment performance has fallen well short of the high ROCE compounders. 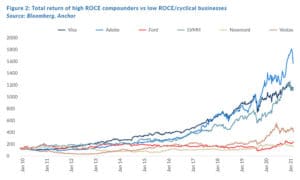 More than just generating high returns on capital, we seek companies that can reinvest that capital at similarly high returns. It is this reinvestment that compounds the rate of growth. There are many examples of companies that generate high returns on their capital but are not retaining and reinvesting and are therefore not compounding their growth. In Figure 3, we show the investment performance of several other high ROCE compounders (again in shades of green) compared with examples of businesses that generate high returns on capital but are not reinvesting to the same extent.

While the appeal of superior compounding of returns is clear in good times, it is also important to consider how such companies behave under difficult market conditions when it is time for defence. Such companies are certainly not immune to market downturns. However, importantly, their high margins provide significant capacity to weather such downturns, ensuring they will survive. In contrast, weak marginal businesses run by management teams that have a poor record of capital allocation face a high risk that they will not survive a downturn at all, leaving their investors without the prospect of recovering their capital value as economic conditions improve. The severe economic contraction brought about by the COVID-related lockdowns, provided several recent examples of the latter – brick-and-mortar retailers (J.C Penny, among others) and offshore oil drilling contractors (Valaris Plc, for example), that had been performing poorly before the downturn and were quickly pushed into Chapter 11 by the pandemic-driven downturn.

Sticking to our lane

Investing can be a lonely pursuit when, amidst the ebb and flow of themes that are driving the market at any given time, companies that meet one’s investment criteria are not in vogue. Quality, high ROCE compounders are typically highly rated from a valuation perspective. During 2021, there has been considerable debate about whether it is time for the so-called “value” theme to have a resurgence after many years of holding the wooden spoon. Furthermore, many fret that higher-rated shares will be particularly vulnerable as interest rates begin to increase – higher interest rates are seen as a potential headwind for the valuations that can be justified for equities. It can be very difficult to resist the temptation to abandon one’s investment philosophy when tested by periods of underperformance. We will, however, stick to our guns. A further virtue of quality, high ROCE compounders is that time is their ally – they have the ability to grow their way out of a demanding valuation relatively quickly.