In the August Anchor Fixed Income monthly, we highlight that the economic story continues to be one of slowing global economic growth and a moderation in inflation. In response, we have seen a risk-off environment, with market jitters about a possible global recession. In a recent Bloomberg survey, 35% of economists were anticipating a US recession over the next twelve months. However, we remain of the view that recession fears are overdone and that there is more resilience to the global economy than is being priced in. That being said, global interest rates have continued to push lower, with the US 10-year bond now yielding less than 1.50%. Conversely, we have seen South African (SA) bonds (which are perceived as risk assets) caught up in the sell off. As a result, our domestic fixed-income assets are now extremely cheap compared to global peers and history, both in relative and absolute terms. We think that this manifest itself to investors as an attractive interest yield, earned over time.

The SA bond market sold off in August, while policy surprises meant that global yields have pulled lower, often into negative territory. This slowdown in global economic growth and inflation will keep global yields lower for longer. The divergence between SA and US bonds has also increased, making domestic bonds look attractive in both absolute and real terms. We expect that the current pricing will persist for a while, meaning investors will benefit from attractive interest accrual on the asset class. Should a search for yield reignite global interest in SA bonds, then there is significant upside to the asset class, in our view.

Global economic growth continues to slow with purchasing managers indices (PMIs) on a downward trend for a while. Changes over the past year are quite stark with developed market (DM) PMIs, in particular, showing significant declines. 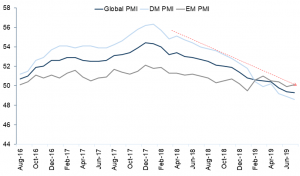 Figure 2: PMI changes in the past 12 months: 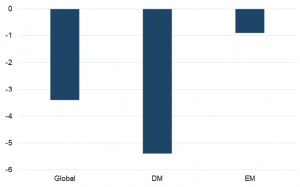 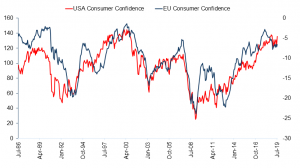 Overall, global economic growth is slowing down, partly in response to the uncertainty around the direction of global policies. This slowdown is impacting both DMs and emerging markets (EMs). Unfortunately, SA growth has been lagging its EM peers and putting the country at more risk. 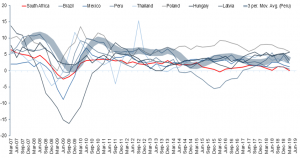 Globally, interest rates have been trending lower as a result of slower growth and the absence of inflation. The US yield curve inverted in August, which usually portends a recession. While our base view remains that the US is unlikely to enter a recession in the next twelve months, it is also clear to us that the risk of a recession is increasing.

As this risk of a recession increases, bond yields have been pushing below zero. The EU, Japan and Switzerland all have negative rates. We believe that this will incite a search for yield amongst dividend-paying stocks and riskier bonds. For now, though, risk-off sentiment dominates markets and risk assets (such as local bonds) have sold off.

The yield on local bonds is attractive – both in absolute and real terms. We expect that this will play out as an attractive interest accrual for now. However, when risk aversion abates and the search for yield ignites, we see significant opportunity for gains in SA bonds. We have been accumulating duration assets in our fixed income portfolios over the month. 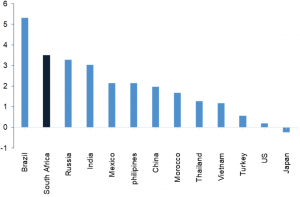 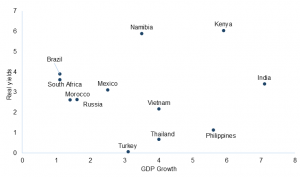