Amid this year’s environment of rapidly increasing food prices, the Food and Agricultural Organization of the United Nations’ (FAO’s) Food Price Index (FFPI), which measures the monthly change in international prices of a basket of food commodities, decelerated by 2% from May to 154 points in June, which is a welcome development. This third consecutive decline was mainly driven by softening prices of vegetable oils, grains, and sugar. In the case of grains, the price declines from the higher levels we saw following Russia’s invasion of Ukraine are mainly on the back of improved wheat supplies following the harvest period in the Northern Hemisphere. The decline in vegetable oil prices coincided with Indonesia’s decision to reverse its policy proposals to limit the export volumes of palm oil. This policy reversal brought assurance of availability of supply, which had worried importing countries across the globe, including South Africa (SA).

Nonetheless, global food prices remain elevated compared to June 2021 (up 23% YoY). Positively, the softening of global grains and oilseeds prices has continued into July and will likely reflect a fourth-consecutive price decline in the July FFPI update. That being said, the global grains and oilseeds market fundamentals are roughly unchanged. The Russia-Ukraine war continues to block exports and production within Ukraine. Moreover, the 2022/2023 season remains at risk of a continuous La Niña weather phenomenon, which could weigh on South America’s harvest. Whilst there remains plenty of uncertainty in the coming months, the FFPI presents a welcome picture of decelerating global prices from the peaks experienced in the days and weeks after Russia invaded Ukraine and disrupted worldwide production and trade. Nonetheless, this current downward trend cannot be taken as a given that global food prices are normalising; whilst there is some level of that in rice and soybeans, the wheat and maize story remains uncertain. 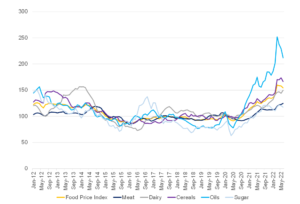 In comparison to some of our international counterparts, interestingly, in June 2022, SA food inflation remained lower than food inflation in Zambia, Kenya, Brazil, the US, and the EU – as illustrated in Figure 2 below. However, local food inflation showed the third-highest MoM increase after China and the EU and may signal a ‘catching-up’ scenario. 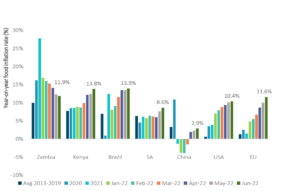 SA’s latest (June) inflation print came in at 7.4% YoY, up from 6.5% YoY in May. The main contributors to the 7.4% annual inflation rate were food and non-alcoholic beverages, housing and utilities, transport, and miscellaneous goods and services – once again, all the usual suspects. Core inflation (excluding the volatile categories of food and energy costs) remains moderate at 4.4% YoY. It is worth noting that, at this level, core CPI inflation is modest by its historical standards and, critically, still below the mid-point of the target range. Considering one of the key drivers of headline inflation this year, the oil price, which has risen to 14-year highs amid sanctions on Russia, has now fallen from its June peak of US$119/bbl but is still above the US$100/bbl mark. Oil prices have slowed of late as signs of a potential demand-reducing global recession fed through to financial markets. However, weaker oil prices have not yet resulted in relief for local consumers, who had to contend with yet another petrol price increase in July. Nonetheless, according to the Automobile Association of South Africa, August may offer SA consumers some respite, with fuel prices expected to drop across the board. The decline in international crude oil prices is driving these decreases but they are being offset by a weaker rand vs US dollar exchange rate. 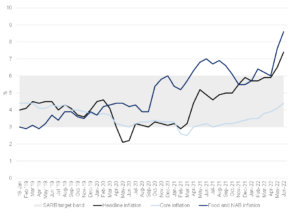 Considering SA’s food inflation specifically, it continues on an upward trajectory, reaching 8.6% YoY in June 2022, mainly driven by price increases for meat, bread/cereals, oils and fats and dairy/eggs. Prices for all meat categories held firm during June, albeit for different reasons. The cost of poultry meat increased due to global supply issues and disease outbreaks in key production areas (i.e., avian flu in China). This, combined with a weaker exchange rate and broad-based input cost pressures, drove local prices higher. In the case of red meat, beef carcass prices remained above R60.00/kg in June for A2/A3 grades but have seemingly since stabilised. The ongoing foot-and-mouth disease (FMD) issues around the country are also likely at play in the current price dynamics. The full impact of the commodity price shock of the war in Ukraine on grains and oilseeds is now apparent, with inflation on bread and cereals rising by 11.2% YoY and oils and fats recording a staggering 32.5% YoY. The latest empirical research by the Bureau of Food and Agriculture Policy (BFAP) indicates that it takes between 3 and 4 months for price shocks in grain and oilseed markets to fully manifest in retail prices, and the published June inflation data confirm this.

Underlying global commodity prices did, however, ease in June due to aggressive increases in the US interest rate. Downward grain price trends gathered further momentum in July with talks of increased exports from the Black Sea region, such as Ukraine, which would affect global wheat availability and prices. After easing at the start of July, global maize and soybean prices regained momentum towards the middle of the month as heatwaves affected key production areas in the US and EU. Going forward, key factors to monitor would be weather issues in the Northern Hemisphere and the level and duration of the US Federal Reserve’s (Fed’s) interest rate adjustments. Higher interest rates will dampen demand for commodities and weigh on prices. This would also be transmitted to local prices but could be offset by a relatively weaker local currency as a weaker rand is associated with higher US interest rates.

It is also worthwhile noting that inflationary pressures over the past two months did not originate only from agricultural commodity and product prices but that there were cross-cutting issues related to manufacturing and distribution that affected food retail prices. An additional factor to consider for July is the severe loadshedding SA experienced in the first half of the month. However, the effect is difficult to quantify because it implies higher production costs and lower demand. Since higher production costs resulting from loadshedding are more immediate, these costs have the potential to contribute significantly to inflationary data for July and August.