The South African (SA) agricultural sector currently finds itself operating in an increasingly tricky environment. Not only are interest rates rising, but key input costs such as fertiliser and animal feed remain elevated and are likely to stay at a higher level for some time. The increases in input costs are partly the result of the Russia-Ukraine war, which has limited fertiliser production and exports from Russia. Prior to the war, Russia was the world’s leading exporter of fertiliser, accounting for about 14% of total global exports. Supply constraints in China (which have been partially driven by the latest round of COVID-19 lockdowns and Chinese authorities’ decision that fertiliser companies should stop exporting to ensure supply to the domestic chemical fertiliser market) have further contributed to higher input prices. This is important to bear in mind given that China is the second-largest exporter of fertiliser after Russia, constituting an average of 12% of total global exports. With the two significant fertiliser exporters, Russia and China, limited in the export market, supplies have been notably reduced. Consequently, input prices will likely remain elevated for some time.

After reaching a new all-time high in March 2022, the FAO Food Price Index (FFPI) decreased by 0.8% MoM in April 2022, with the downturn mainly driven by the vegetable oil sub-index. The April 2022 FFPI was also 29.8% higher YoY. The major drivers of this latest round of food inflation internationally were much of the same as those seen in March, with the impact of the ongoing war in Ukraine being exacerbated by weather conditions, late plantings, and various international trade policy actions. Globally, Kenya, Brazil, the US, and the EU have experienced continued rising food inflation in 1Q22. Apart from China, food inflation in SA was the lowest of all countries included in the comparison detailed in Figure 1 below. 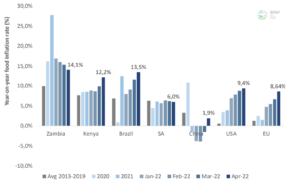 SA’s latest headline CPI print came in at 5.9% YoY for April – unchanged from March’s level. The main contributors to annual headline inflation were, once again, food and non-alcoholic beverages, housing, and utilities as well as transport – all the usual suspects that have been driving prices of late. Interestingly, April core CPI printed slightly higher at 3.9% YoY (vs 3.8% in March) as headline pressures slowly trickle down through to the more stickier, entrenched categories. Nonetheless, core inflation remains contained – signalling domestic inflationary pressures are muted. 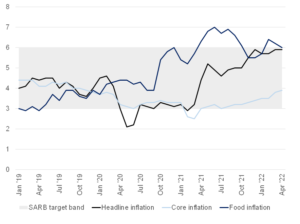 Food inflation moderated slightly in April due to base effects, printing at 6% YoY, from 6.2% in March. The continued elevated prices in SA are predominantly being driven by the above-mentioned global factors, which have been relevant for several months, but in some cases have also deteriorated. In addition, there are persistent concerns surrounding adverse weather conditions which could curtail policy actions and the supply response to surging prices in some major producing countries. This includes a ban on palm oil exports from Indonesia, the largest global exporter, which will drive already high vegetable oil prices up further, and India’s ban on wheat exports. Weather conditions in the US have also delayed plantings of summer grains and oilseeds, which further supported price gains. These persistent increases in agricultural commodity prices globally have filtered into the local market, supporting high prices amongst major grains and oilseeds, despite the expectation of another bumper crop, which should ease any concerns around availability and ensure that commodity prices continue to trade at export parity levels. Global factors have additionally contributed to rising meat prices, notably the continuation of intermittent Avian Influenza outbreaks and supply constraints emanating from a prolonged period of high feed prices.

However, several important domestic factors have also contributed to the elevated prices, such as reduced slaughter volumes. In March 2022, cattle slaughters were 10% lower than in March 2021, partly due to reduced utilisation of feedlot capacity amid ongoing concern around the spread of foot-and-mouth disease (FMD) and surging feed prices. High feed prices are also contributing to higher poultry prices in SA and the rest of the world, along with a depreciating exchange rate. The rand has depreciated by 4.8% in trade-weighted terms since the latter part of March and thus is expected to also contribute to broad-based local inflationary pressures over the coming months. With regards to the local horticultural industry, disruptions from important markets such as the Black Sea (important for citrus and deciduous fruits) imply that profitability will be negatively affected. It will not be an easy task to reroute fruits to other markets, particularly citrus, whose export season starts this month. The logistical challenges at ports, exacerbated by the recent floods in KwaZulu-Natal, form additional costs.

In addition to rising agricultural commodity prices, food inflation is also being driven by increasing costs throughout the value chain. Many of these also emanate from supply disruptions in global energy markets, where the war in Ukraine and associated sanctions on Russia have driven oil and natural gas prices up sharply. In SA, energy costs have been increasing at above-inflation levels for some time. Lastly, rising global oil prices have rapidly driven up local fuel prices- the retail price for diesel in SA has increased by approximately 50% over the past year and has therefore put significant upward pressure on transport costs.

Overall, rising interest rates, as well as various rising input and other costs throughout the value chain as a result of a complex mix of both global and local factors imply that the SA agricultural sector will continue to find itself operating in a complex environment for some time to come. As a result, food inflation is likely to remain elevated for the next few months. Consequently, agricultural producers and agri-businesses alike will have to increasingly focus on cost-management strategies for the foreseeable future, to help stem the rising tide.

If you have any questions or would like to discuss the subjects raised in this article with someone at Anchor please email us at [email protected].