Woolworths reported 1H21 results on 25 February, with adjusted HEPS up 19.4% YoY to ZAc193.7, coming in at the mid-point of recent company guidance. Group turnover grew by 5.8% YoY to R39.6bn. Among its operating segments Woolworths Food was the star performer, growing turnover by 12.1% YoY, while Woolworths Fashion, Beauty and Home (FBH) continues to struggle with this segment’s turnover declining by 11.2% YoY. The Group’s Australian venture, David Jones saw a good recovery, with turnover rising by 5.3% YoY in rand terms. However, we note that this performance was aided by coming from a very low base due to store refurbishments in the prior period and some rand weakness. In Australian dollar terms, turnover declined 8.8% YoY. Country Road recorded a rise in turnover of 9.4% YoY in rand terms due to currency tailwinds, but in Australian dollar terms, turnover declined by 5.2% YoY.

Debt was substantially reduced (by R5bn YoY) to R6.7bn. This is before the sale and lease back transaction of Elizabeth Street, which should lower Woolworths’ debt even further. The cash generation from the business was probably the highlight of the period. More importantly, management confirmed on the results presentation call that the sale of Elizabeth Street has allowed them to break any covenants or other legal obligations between Country Road and David Jones. This provides Woolworths management with far greater freedom in choosing the right course of action regarding the future of David Jones.

We believe that the best way to value Woolworths is on a sum-of-the-parts (SoTPs) methodology. The view on the share is very sensitive to the value ascribed to David Jones. At present, we are reluctant to place a meaningful value on this division and hence we do not see great upside from current trading levels, although we are comfortable to hold it with a c. 10% potential upside. 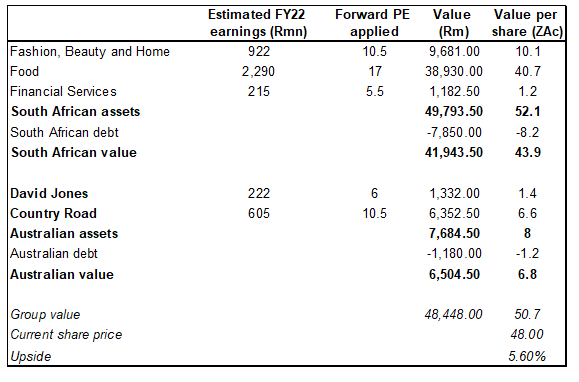 Woolworths’ 1H21 results were somewhat of a mixed bag, with some divisions performing exceptionally well, while other segments continued to struggle. Food was again the star performer, growing operating profit 23% YoY. On the other hand, FBH continues to struggle, with management committing to taking the tough decisions required to turn this business around.

The Australian operations performed well, but this was mainly due to government support measures and the rental relief received. The sale of Elizabeth Street and the subsequent break in legal ties between David Jones and Country Road were significant events that have changed the outlook for the business. Nevertheless, we think that most of this upside is already in the price, with a c. 10% upside to our target price from current share price levels.