The surprising resilience of the South African consumer

The COVID-19 pandemic has caused extreme economic hardship across the globe, with the World Bank forecasting that China will be the only country to show positive YoY economic growth for 2020. The pandemic has also highlighted the huge financial inequalities across the world, with poorer and less developed economies being hit far harder than their wealthier and more developed counterparts. Unfortunately, South Africa (SA) falls into the first category and the pandemic arrived on our shores at probably the worst possible time. The country was already struggling with a recession and a hamstrung new administration after years of maladministration under ex-President Jacob Zuma. The sheer scope of the looting, especially at state-owned enterprises (SOEs), during these years, continue to shock the public as more details emerge from various witnesses at the Judicial Commission of Inquiry into Allegations of State Capture (Zondo Commission).

Under the Zuma administration, SA experienced negative GDP YoY per capita growth since 2015, while business and consumer confidence levels plummeted. Then, just as the country was starting to turn the corner and government began making the right noises about curbing spending, driving structural reforms and, more importantly, there was some incremental evidence of these plans leading to actions, albeit frustratingly slowly, the pandemic hit…

Given the precarious position of SA’s “recovery” when COVID-19 hit, most analysts expected the local economy (and consumers) to be obliterated. Media reports started to emerge of thousands of workers being laid off and businesses that had to be shuttered. And, with government having no fiscal space to provide any support to the economy, these already negative expectations only worsened.

However, data from the past two quarters are starting to paint a very different picture of the SA economy. The local consumer appears to have navigated the crisis far better than many had anticipated. Looking at December SA retail sales numbers, which Stats SA released on 17 February, we can see that retail sales continued to recover from the lows during the strictest lockdowns of the COVID-19 pandemic. The pace of the recovery continues to be gradual, however, as consumers remain cautious in the current uncertain environment. Total retail sales declined by 1.3% YoY – the slowest decline since April 2020. Nevertheless, this 1.3% YoY decline surpassed Bloomberg consensus economists’ expectation of a 2.3% YoY decline.

The recovery is also evident in festive season sales updates provided by most listed retailers. Focusing on their SA operations, Figure 1 below shows that there continues to be an incremental improvement in their sales numbers. This is especially true for the more discretionary retailers, while the food and drug retailers continued to perform strongly throughout the crisis. 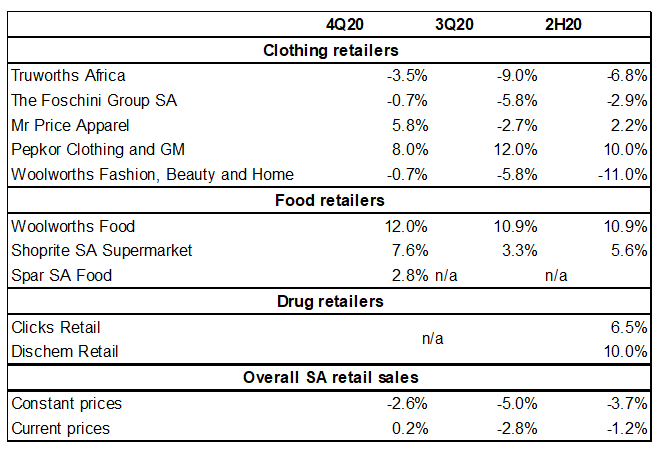 The resilience of the local consumer, and the economy as whole, can also be witnessed in the recent tax collection update provided by the SA Revenue Service (SARS). The latest SARS data show that tax collection in SA has outperformed government’s and economists’ forecasts significantly to the end of December, with value-added tax (VAT), company and personal tax, in particular, performing strongly.

How do we explain this phenomenon?

The first likely reason for this resilience is that, just as the pandemic impacted poorer economies more than wealthier economies, it also impacted the poorer consumer more than the wealthier consumer. From data provided by Standard Bank Research and NIDS-CRAM, job losses were concentrated among the low-income groups in the country, while higher-income groups were largely unaffected. This could, of course, lead to social unrest if ignored in the long term but, over the shorter term, it means that the bulk of spending power in the SA economy is in reasonably good shape. 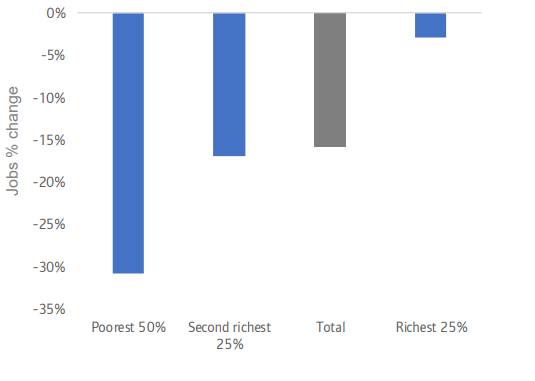 Figure 3: … and their job losses do not seem to be over yet 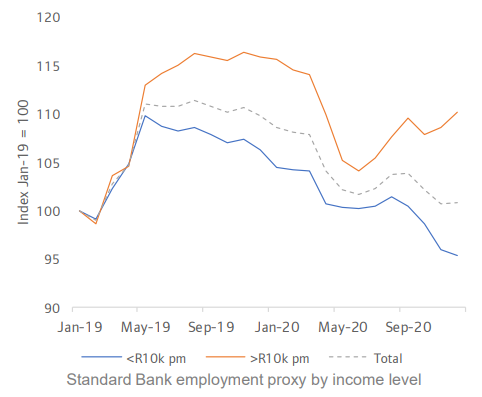 A second possible reason for this resilience is that expenses may have decreased by a greater percentage than income. With many service providers realising that their customers were under pressure, we saw a marked reduction in household expenses in 2020. The SA Reserve Bank (SARB) has also reacted aggressively to the crisis by slashing interest rates further to the lowest level since the repo rate was introduced in 1998, thus alleviating the burdens on households to a large degree. According to data from Investec Securities, the SARB, and Stats SA it is estimated that household savings actually increased in 2020 as expenses dropped by a greater percentage than income. 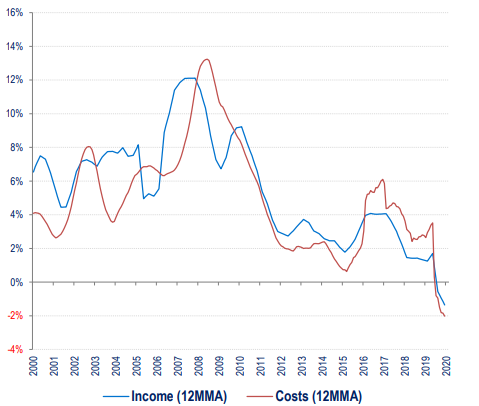 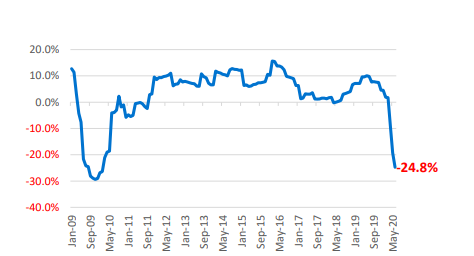 The final possible reason for the resilience of the local consumer and the stronger performance by the SA retailers is the reallocation of spend. Due to the pandemic, costs such as travel (whether for work or leisure), dining out, entertainment, and other social events and activities could no longer take place and those costs were therefore not incurred. Not having to incur these expenses resulted in consumers’ discretionary spending on other categories to be far greater than anticipated. It will be interesting to see how this will “normalise” as we move beyond the pandemic and the various lockdowns.

Following the various retailers’ sales updates and other positive local economic indicators, we remain constructive on the SA retailers in the short- to medium-term. We believe that the market is still valuing them based on far too conservative assumptions and, over the medium term, we think these retailers may surprise on the upside in their upcoming results. The discretionary value retailers such as The Foschini Group, with its recent underappreciated acquisition of JET, and Mr Price, are our top picks – we prefer these counters over the food and drug retailers. Nevertheless, we still see value in Spar, Shoprite, Woolworths, and Dischem, while we take a more cautious stance on Pick ‘n Pay.