Finance Minister Tito Mboweni presented his much-hyped 2020 Supplementary Budget on 24 June. In this note, we discuss what was said, what he did not say and we consider the implications for investing in South Africa (SA).

The economic picture painted by the minister was bleak. SA GDP growth is expected to decline by 7.2% YoY in 2020, while growth next year is forecast at a paltry 2.1% YoY. This means that we should expect this year’s tax collection shortfall to exceed R300bn. The government deficit is also projected to be a record-breaking 15.7%. The nation’s fiscus is indeed in a dire situation.

All the aforementioned were anticipated and, while the minister’s outlook is slightly more negative than that of the rating agencies, the IMF and the SA African Reserve Bank (SARB), these differences are rather minor. Economists agree that the COVID-19 pandemic, along with government’s response to the crisis, has dealt a devastating blow to the nation’s already weakened finances.

The government has been forced into deciding to either correct the fiscal imbalance that has arisen or to continue down its current path until the economy implodes. The language used by the minister was more forceful than we had expected and, we believe, that he has the support of key people in the administration to make the necessary adjustments and bring the country’s finances under control. The minister is targeting a peak debt level of 87% in 2024. This proposed adjustment is sharper and faster than we had been expecting and we are positively surprised.

However, much of the good news was in what was not said rather than in what was said. Prescribed assets were not mentioned. In fact, the minister stated that the government’s borrowing needs were growing faster than the national savings pool. By extension, this means that the domestic savings pool will not be sufficient to finance government’s funding requirements. We think that this was an acknowledgement that prescribed assets would exhaust the savings pool and still leave government unable to fund itself. We would like to think that this will end the prescribed assets discussion and that government will instead focus on viable solutions to the problems at hand.

While the minister did not mention SAA, the SABC or Eskom, we have noted a lot of talk about providing bailouts to the failing state-owned enterprises (SOEs). However, it is important to highlight that no additional bailouts were allocated. Instead, we are seeing the SABC starting retrenchment proceedings to better align its staff compliment with its revenue – a move that was unthinkable just two years ago. Much has changed as our SOEs and government adjust to the current economic reality. The unemployment crisis in our country is heartbreaking, yet only by doing the right thing to put all levels of government on a sustainable footing will the nation be able to tackle poverty and unemployment. We are taking some bitter medicine in order to move our economy in the right direction.

There was no discussion about the role of the SARB. From time to time, the more extremist elements in our society and within the governing party suggest that the SARB printing money can fund government, with these discussions usually dressed up as quantitative easing ([QE], which we believe will never work in SA), budget support or other euphemisms. Our view remains that if the SARB were to print enough money to finance government, then the economy would immediately implode. This can or worms has never been mentioned by the minister as a possible consideration and we take heart in the fact that there was once again no discussion about removing the SARB’s independence.

The minister did mention additional taxes of R40bn being raised in the next four years, with spending cuts of R230bn in the next two years. The additional taxes are, however, quite small. A combination of inflation, minor economic recovery and sin taxes will probably get the minister most of the way there. Mboweni effectively told the population not to fret about possible tax surprises next year. The ball is firmly in government’s court to right its spending habits, and government knows that it cannot lean on the country’s taxpayers any harder.

The Supplementary Budget was very light on details, which have instead been pushed to the Medium Term Budget Policy Statement (MTBPS) to be presented in October. This has left both society and markets asking questions about where government’s savings will come from.

We hear terms like zero-base budgeting, which really means going back to the drawing board and starting from scratch. Ultimately though, the term means that government departments are all going to need to make do with less cash and funds. We can expect the politicking by ministers and departments that must compete for scarce resources to really heat up in the coming weeks and months.

The initial reaction from unions to the budget has been predictable and likely they will be more vocal and aggressive as we head into the next round of wage negotiations. We are going to see tumultuous politics, unsettling headlines, and worrisome fights. However, this is just part of getting back onto the right path and we should look through these events.

We think that the Supplementary Budget’s clear statement of intent was positive for the market. Similarly, the fact that some of the fringe and populist suggestions do not seem to be gaining traction gives us heart. We are therefore more positive than we were prior to the budget. Accordingly, we have moved our fair yield on the R186 government bond that matures in 2026 down from 7.20% to 7.10%. We have also moved the fair yield on the R2030 bond that matures in 2030 down from 9.25% to 9.00%. These moves are relatively modest and reflect the good intentions of government in difficult times.

If the minister can deliver the promised expenditure cuts and government’s infrastructure partnerships with the private sector takes off, we would expect that the fair yields will reprice dramatically lower.

For the next month, our preferred bond is the R186. The SARB has been telegraphing that there is a reasonable prospect of further interest rate cuts at its July meeting. We believe that this bond will find favour with investors as they position themselves for a possible interest rate cut next month.

Longer term, if the finance minister can deliver the promised expenditure cuts, we should see significant capital gains in the longer-dated bonds.

We think that this budget was neutral for the rand in the short term. In our view, it is only once the US has its COVID-19 crisis under control that we will see the next leg of the rand recovery.

We also find the budget to be neutral to slightly negative for equities that are focused on SA as the austerity nature of the proposed savings will detract from consumer spending in the short term. We think that demonstrable traction with the infrastructure investment plans and the necessary savings could make the October MTBPS a catalyst for domestic business and consumer sentiment to improve again. This would then be more supportive of domestically focused equities. 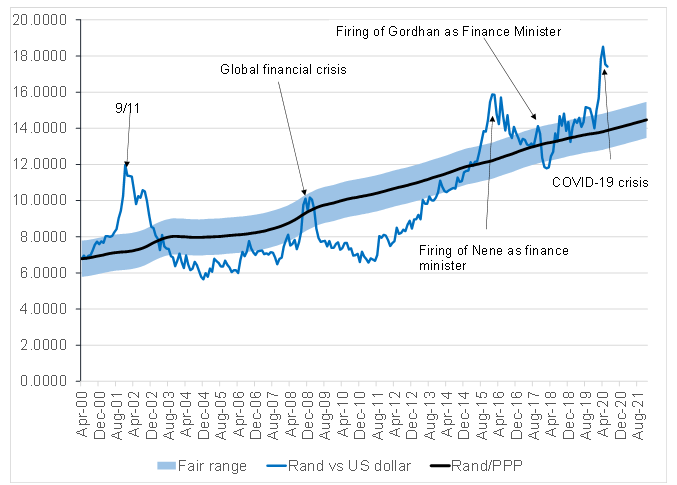 Figure 2: Rand vs US dollar 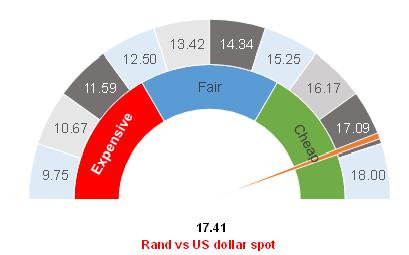 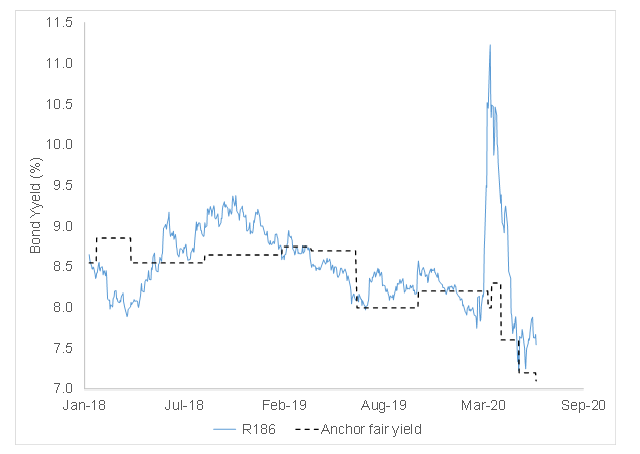 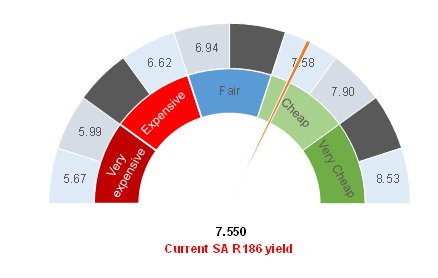 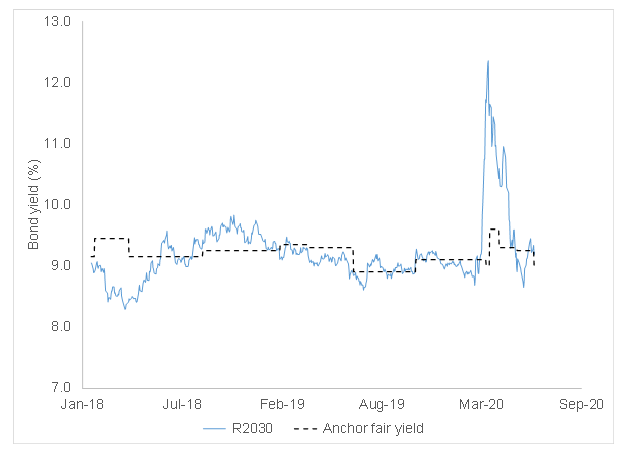 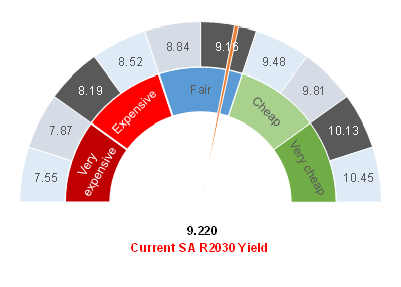