Sasol released its 3Q20 production update on Thursday (23 April) in which the Group announced a range of measures to protect its balance sheet against the current COVID-19 pandemic and record-low oil prices. Unprecedented demand destruction due to movement restrictions related to COVID-19 and the boost in supply as global oil producers, particularly Russia and Saudi Arabia, have been flooding the market in a tussle to gain market share has resulted in oil prices dropping to historic lows. Sasol, which has also seen its share price tumble to record lows (down c. 80% YTD [to 23 April]) said that it will cut the salaries of its executive committee and senior leadership by 20%, and for middle and junior managers by between 10% and 15%. It said that these measures were “… necessary to help protect the company’s balance sheet and liquidity …” until at least the end of FY21.” Sasol’s CEO will donate 33% of his salary to the Solidarity Fund for three months, followed by a 20% salary cut for the next 5 months. The company added that it now expects a FY20 loss of up to $100mn from its Lake Charles Chemicals Project (LCCP) due to weak oil prices. Its LCCP project has been a major financial drain for Sasol as development costs rose to c $13bn – almost double its initial budgeted projections.

Earnings are, not surprisingly, under significant pressure

Liquid fuels volumes are guided to decline by about 16% (from 60mn bbls to 50.5mn bbls) for FY20. Sasol’s chemicals business is seeing stronger volumes but at much weaker prices. Chemicals prices tend to follow oil prices and global GDP. In the short-term, the relative success or failure of Sasol’s asset disposal programme remains key to watch. Selling energy or petrochemical assets in the current environment at decent valuations seems challenging. No major update was provided on Sasol’s asset disposal programme in the announcement.

The production update did not include any particularly big announcement on the balance sheet strategy (see Figure 1 below). The biggest variable remains the valuation achieved on asset sales. Media reports emerged earlier this week that Sasol is looking to sell a minority stake in its US base chemicals business. The company itself, however, has not made any statement on this.

Sasol is targeting a saving of $2bn from self-help measures, which includes working capital improvements. However, this is proving to be challenging, as it may also need to increase inventory levels to mitigate against the risk of a COVID-19 impact on its operations.

In addition, Sasol is still working with lenders towards further lifting, or perhaps even withdrawing, certain debt covenants.

Production volumes at its SA operations were 3% higher in the nine months ended 31 March vs the same period a year ago. Full-year production is expected to decrease to between 7.3mn to 7.4mn tonnes amid lower demand for fuels. 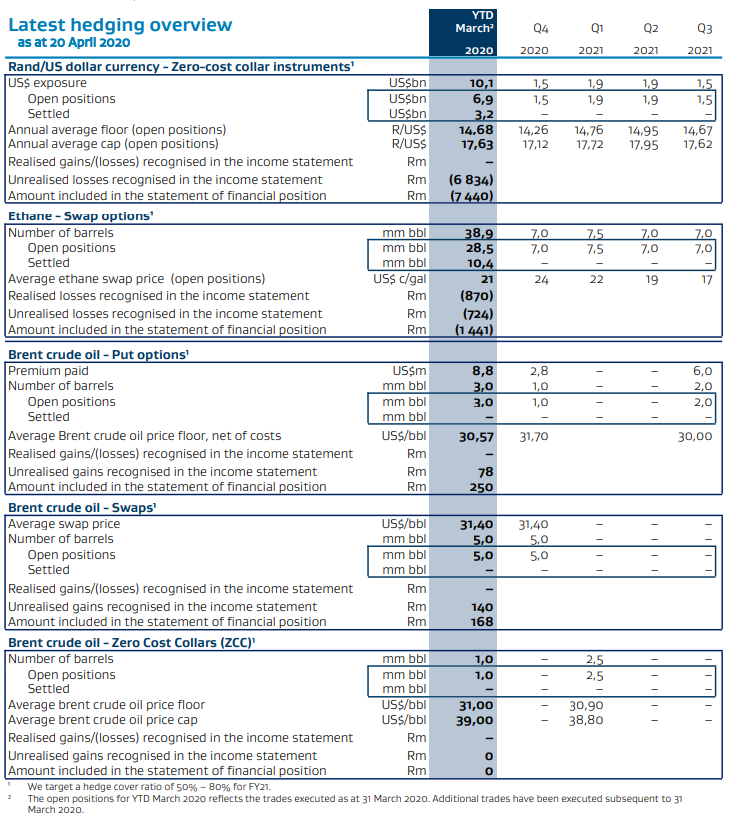