On Monday (24 February), Sasol reported disappointing results for the six months ended 31 December 2019. Headline earnings per share (EPS), fell 74% YoY to R5.94, with the combination of weak oil (a 9% YoY drop in the rand per barrel price of Brent crude) and chemicals prices as well as heavy Lake Charles Chemicals Project (LCCP) capital expenditure (capex) continuing to pressure the balance sheet. Sasol did say that it is anticipating that LCCP will start generating positive earnings before interest, tax, depreciation and amortisation (EBITDA) in 2H20.

Capex spending should ease going forward, as it is guided to nearly halve (-46%) from R56bn in FY19 to R30bn in FY21 (FY20 guidance: R38bn). As a result of weak oil and petrochemical markets and LCCP capex, Sasol is at the upper end of its balance sheet guidance ranges. Gearing is at 65% (vs Sasol’s guidance of 55%–65%), while net debt/EBITDA is at 2.9x (vs guidance of 2.6x–3.0x). Unsurprisingly, the dividend has been cut for this period and a final dividend is also very unlikely. 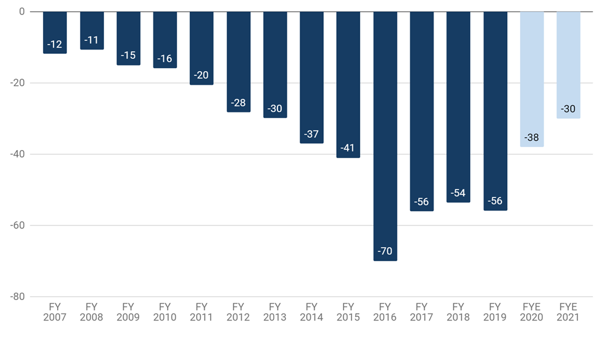 LCCP now has 80% of its installed output online and the project is 99% complete (LCCP capex tracking is at $12.8bn). LCCP also recorded a negative impact of R2.8bn on EBITDA for the half-year. There was a further R2.0bn in interest expense (c. R3.20/share) that hit the income statement for the half-year. Looking ahead, Sasol is guiding for $600mn-$700mn in FY21 LCCP EBITDA. At the midpoint, that would equate to R10/share in EBIT (c. R3/share in EPS), if achieved.

In our view, the share is cheap if one assumes a relatively normal environment for oil and chemicals prices. We calculate that Sasol should be able to generate R30 HEPS in FY21 if oil averages $60/bbl and with only a moderate recovery in chemical prices. At a R200/share price it is attractive if achieved (6.7x multiple on FY21 earnings under this scenario). The challenge between now and then is the risk to the balance sheet if oil and chemicals prices decline. If oil averages below $55/bbl for an extended period (and chemicals prices are similarly weak) then the company is likely to breach its covenants (which have already been lifted for December 2019 and June 2020 from 3.0x to 3.5x for net debt/EBITDA). Sasol is a highly leveraged cyclical company at a time where its commodities are under pressure. Nevertheless, if Sasol can get through the next 12-to-18 months, the share is notably cheap (trading below 7x on earnings that don’t have demanding oil or chemical price assumptions).

Why is Sasol’s core HEPS so much larger than its reported HEPS?

The difference is mostly driven by LCCP losses incurred during the current ramp-up phase – see the reconciliation in Figure 2 below.

On Monday’s investor call, most of the discussion focused on LCCP and Sasol’s balance sheet. Below, we highlight some main points from the call.

At what point does Sasol get close to breaching its debt covenant?

What happens if Sasol breaches the covenant?

What will trigger a resumption of dividend payments?