On Tuesday (8 September), Statistics SA announced that South Africa’s (SA’s) gross domestic product (GDP) dropped by 16.4% QoQ seasonally adjusted, or 17.1% YoY, pushing the country deeper into a recession. This was SA’s fourth consecutive quarterly GDP decline, but the data reflect the months of April, May, and June – the worst period of the COVID-19-induced lockdown, which started on 26 March in SA (1Q20 is basically pre-lockdown).

SA is not alone in having to deal with the ravages of COVID-19 on its economy. COVID-19 is a truly global crisis and the impact of the pandemic-induced lockdowns on economies around the world were severe. In Figure 1 below, we highlight the impact on various global economies during the same period. 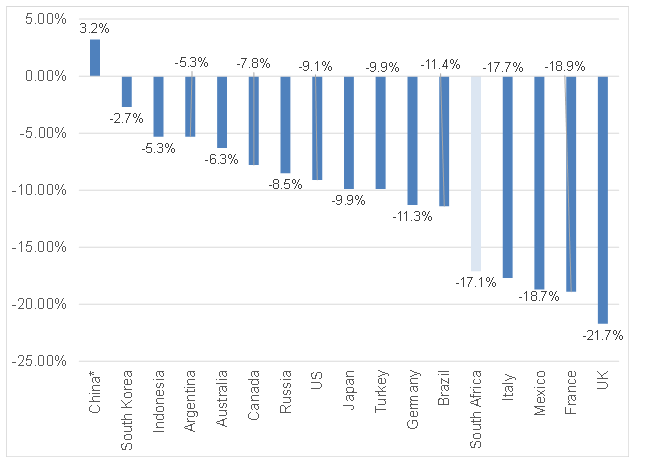 We note that the headline-grabbing number of SA’s GDP plummeting by 51%, which so many publications have highlighted in reporting on the numbers is misleading as it is annualising the quarterly number (i.e. if we contracted at that pace for four quarters our economy would shrink by 51% – probably a bit aggressive extrapolating that kind of correction!). Still, the actual numbers were pretty dire, albeit without the same shock value and only slightly worse than consensus expectations of a 16.0% YoY drop.

Looking at the data through to a sectoral level, we have created the chart in Figure 2 below to highlight how significant each of the sectors are in terms of their respective contribution to SA’s economic output and employment (based on 1Q20 data). 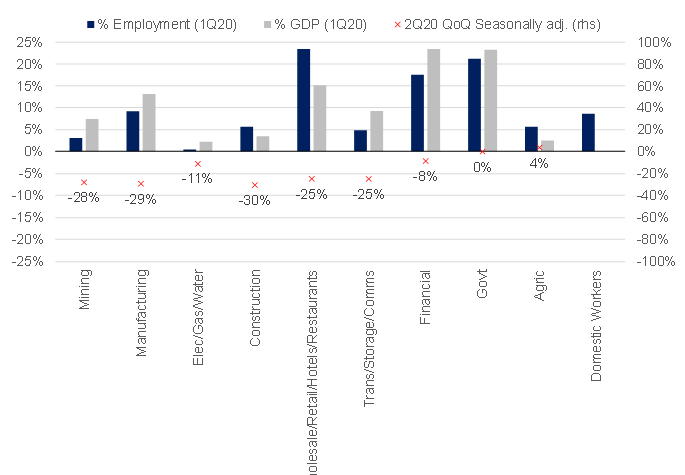 Probably the most concerning in terms of employment are:

On the positive side, the financial sector, which constitutes 18% of SA employment (and 23% of GDP) saw its output drop “only” 8% QoQ seasonally adjusted in 2Q20.

Government, SA’s second-biggest sector in terms of employment (21%) and making up 23% of economic output, saw its contribution to the economy decline by only 0.2% QoQ seasonally adjusted in 2Q20.