Ramaphosa’s Cabinet: A step in the right direction

President Cyril Ramaphosa was initially expected to announce his Cabinet soon after his inauguration on Saturday (25 May). However, the announcement was delayed to this week and finally, on Wednesday evening (29 May 2019) the president’s choices were revealed. The delay in announcing the Cabinet had seen the rand slump to a c. 6-month low as investors interpreted it as Ramaphosa facing opposition to his reform agenda and signs that he may be negotiating with factions within his own party.

The press and political commentators have theorised as to the reasons for the delay. Conjecture ranged from Ramaphosa having to appease opposing factions within the ANC, the ANC’s integrity commission having flagged 22 members as problematic on the national and provincial parliamentary lists prior to the election (including Deputy President David Mabuza and ex-Mineral Resources Minister Gwede Mantashe), having to reward ANC allies such as the South African Communist Party (SACP) and the Congress of South African Trade Unions (COSATU) for their support and current Public Protector (PP) Busisiwe Mkhwebane’s findings against former Public Enterprises Minister Pravin Gordhan (a key Ramaphosa ally) being serendipitously released a day before Ramaphosa’s inauguration.

Whatever the reasons, and these probably involve the machinations of individuals aligned to the ANC faction fearful of the cleanup in government, overall, reviewing the chosen Cabinet we note there were no major disappointments and the key drivers for sorting out the economy remain. Ramaphosa in all likelihood did the best he could under difficult circumstances considering the fact that he is to an extent obliged to hand out enough “patronage” to satisfy different factional interests (although this has seemingly been the case more at the level of deputy ministers). Disappointingly, he has retained a number of individuals from the previous Cabinet, although he shuffled them around to different posts. We note that the president has said that the performance of ministers “individually and collectively – will be closely monitored against specific outcomes” and where implementation is unacceptable, “action will be taken.”

Nevertheless, with a few exceptions, his choices seem to be market-friendly and, more importantly, excludes several (although not all) questionable candidates from the Zuma-era. In addition, he has changed how his executive and ministries are structured, cutting the size of the executive from 36 ministers (and 35 deputy ministers) to 28 ministers (and 34 deputy ministers). The SA Cabinet was one of the world’s largest, ballooning from c. 50 members under ex-presidents Nelson Mandela and Thabo Mbeki, 47 under Kgalema Motlanthe to 71 members under Zuma. With the country’s bloated public sector wage bill (R540bn-plus p.a. – c. one-third of government spending), SA could ill afford maintaining a Cabinet of that size. For a size comparison with a number of other countries see Figure 1 below: 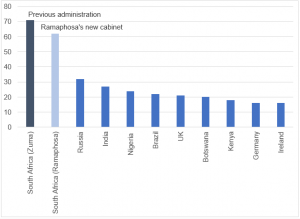 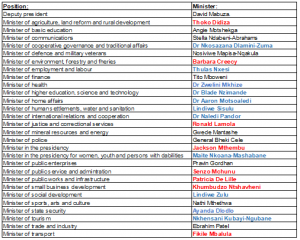 First, let’s assess the positives or strategic moves on the part of the president – the new executive was cut (comprising now of 28 ministers vs 36 previously), for the first time in SA history women account for 50% of ministers, there is a good generational mix with a significant number of younger people  appointed and he kept the all-important economic cluster untainted. Well-respected former South African Reserve Bank (SARB) governor Tito Mboweni remains finance minister (fiscal stability), although his deputy Mondli Gungubele has been replaced by David Masondo. Mboweni has been a proponent of reining in government spending and selling some beleaguered state-owned entities (SOEs). His reappointment is seen as buoying Ramaphosa’s plans to revive the economy and attract foreign investment. Gordhan, probably one of the more controversial appointments for some following the release of the PP’s report on Friday (24 May), is once again minister of public enterprises. He is well-respected (except by the Zuma faction and the EFF) and has been at the forefront of efforts to turn around SOEs at the epicenter of looting during Zuma’s presidency. Gordhan headed the SA Revenue Service (SARS) and previously served two terms as finance minister.

A big surprise was the appointment of Patricia de Lille as minister of public works and infrastructure. This is likely a strategic move on the president’s part– what better way to get those Western Cape voters from the DA. Although, people who had voted for de Lille’s GOOD party might be slightly unhappy at the turn of events.

Other new faces include Jackson Mthembu, the ANC’s former chief whip in Parliament, as minister in the presidency and lawyer Ronald Lamola as the minister of justice and correctional services. Lamola is a strong Ramaphosa supporter, lawyer and at 36 he is among parliament’s youngest members. He was previously  ANC spokesman on land reform. The appointment of Naledi Pandor to international relations and co-operation has also been lauded by various commentators, with Lindiwe Sisulu moving to human settlements, water and sanitation. Senzo Mchunu, who was defeated by Ace Magashule for the position of ANC secretary-general in 2017’s ANC elective conference, is the new minister of public service and administration and, in a move likely to appease unions, ex-union leader Ebrahim Patel was named minister of trade, industry and economic development.

Dr Nkosazana Dlamini-Zuma, who lost to Ramaphosa at the ANC electoral conference and was ex-president Zuma’s favoured successor, has been moved from minister in the presidency (who oversees the National Planning Commission [NPC]) to minister of cooperative governance and traditional affairs, with ex-Johannesburg mayor Parks Tau and Obed Bapela as her deputies. Intellidex writes that she has broad support from the ANC’s NEC and “pockets of strong opposition.”

Former minister of state security Dipuo Letsatsi-Duba, a key defender of Ramaphosa, is surprisingly out of Cabinet. She has been replaced by Ayanda Dlodlo with Zizi Kodwa as her deputy. Among the new appointees are Barbara Creecy as minister of environment, forestry and fisheries, while Thoko Didiza’s new role is that of minister of agriculture, land reform and rural development. Didiza had occupied the position before under the Thabo Mbeki administration and by all accounts served the position well.

Over 50% of the new executive seems to be comprised of Ramaphosa’s allies. According to a report in The Citizen, these allies include Mantashe, Gordhan, Mondli Gungubele, Blade Nzimande, Bheki Cele, Cassel Mathale, Stella Ndabeni-Abrahams, Senzo Mchunu, Aaron Motsoaledi, Naledi Pandor, Jackson Mthembu, Fikile Mbalula, Ronald Lamola and Zizi Kodwa. The paper also writes that “none of the remaining members can genuinely be counted as hard-core Zuma supporters.”

It was revealed last week that some of the more circumspect ministers in the previous administration including Nomvula Mokonyane and ex-Finance Minister Malusi Gigaba would not be sworn in as members of parliament. Wednesday’s announcement also left out Bathabile Dlamini (head of the ANC’s women’s league and former women’s minister who the High Court accused of perjury although she denies wrongdoing), Michael Masutha and Siyabonga Cwele. Other ministers that didn’t make the cut included Jeff Radebe (the longest-serving Cabinet minister, heading the energy portfolio.), Rob Davies, Derek Hanekom, Senzeni Zokwana, NomaIndia Mfeketo, Suzan Shabangu, Dipuo Letsatsi Duba, and Gugile Nkwinti.

In terms of the smaller Cabinet we are neutral on this announcement – it could have been made significantly leaner. The president only cut his executive by 8 people – with the number of ministers serving under him reduced from 36 to 28 people, with 34 deputy ministers (many of the combined ministries now have two deputy ministers!).

The various ministries that were merged to cut down on expenditure include trade and industry being combined with economic development, higher education and training combined with science and technology, environmental affairs combined with forestry and fisheries, while land reform and rural development will have one minister and the combined mineral resources and energy ministries will now fall under Gwede Mantashe (he previously held the mining portfolio). Human settlements was combined with water and sanitation, while sports and recreation combines with arts and culture. The portfolios of communications and telecommunications and postal services had already been combined previously.

On the negative side, David DD Mabuza retained the position of deputy president (there were whispers that Naledi Pandor or Lindiwe Sisulu might be up for this position). While Mabuza played a pivotal role in helping Ramaphosa win control of the ANC in December 2017 and commentators see him as an important power broker within the party, he is a controversial character. Although several reasons for the delay in the Cabinet announcement floated around, Mabuza’s insistence to “clear his name” in front of the party’s integrity committee, was likely the main reason. The integrity committee had accused him of bringing the party into disrepute after he was linked to several scandals during his tenure as Mpumalanga premier. He also faced accusations that he helped rig state tenders and had opponents silenced and even assassinated while premier (these allegations also appeared in the New York Times in 2018). Mabuza denies any wrongdoing and has never been charged. He was also cleared of wrongdoing by the integrity committee. Nevertheless, it is concerning that a person with these accusations hanging over them is literally a heartbeat away from the presidency.

Other circumspect reappointments include that of Blade Nzimande to the combined ministry of higher education, science and technology (he was higher education and training minister during the fees-must-fall campaign and received backlash from students and the media on his handling of the situation, even being accused of worsening the crisis). Angie Motshekga has already spent a decade as minister of basic education and, despite the dismal state of SA’s  education system, has been given a further 5 years. Nosiviwe Mapisa-Nqakula retains the defence ministry despite being accused last year of using an SA plane to smuggle a friend into SA, Maite Nkoana-Mashabane remains in cabinet as minister in the presidency for women, youth and persons with disabilities and the appointment of former Cosatu president and staunch Zuma supporter, Sdumo Dlamini (as deputy minister of agriculture, land reform and rural development) is likely Ramaphosa reaching out to former Zuma supporters.

While some questionable characters remain in key positions, Ramaphosa’s cabinet appointments seems to have brought about some much-needed investor confidence with the rand strengthening slightly Wednesday evening (+0.4%) and remaining relatively steady this morning (although this is likely due to the positive perception associated with the retention of Mboweni and Gordhan). Under the circumstances, Ramaphosa has done relatively well with some of the portfolios, and retaining well-regarded ministers such as Mboweni and Gordhan (despite some fightback against their retentions from various fronts) in key portfolios should be applauded and seen as a signal to investors that Ramaphosa’s reform agenda remains on track. However, despite some positive appointments, investors will not on the back of the new Cabinet announcement be rushing to invest in SA without clear signals that those involved in corruption and misconduct will be going to jail – here actions speak louder than words. In addition, resolving the debt burden at SOEs and especially at power utility Eskom is key, and here it would appear that Gordhan is the man for the job. Fortunately, for the most part, those ministers tainted by corruption scandals, implicated in the state capture inquiry or with ineffective track records, who would have reduced confidence, have been left out. In terms of the new faces, only time will tell whether Ramaphosa’s decisions were in the interest of SA or of the ANC.