On the macro front, SA retail sales rose 2.9% YoY in June, above consensus expectations, after increasing by a revised 1.6% in May. MoM, July private sector credit demand recorded growth of 5.41% – slower than June’s 5.68% advance. Local July consumer price inflation (CPI) accelerated for a third successive month to a 10-month high of 5.1% on the back of rising petrol prices (and the knock-on effect this has had on other categories) and the weaker rand. Core inflation, excluding the volatile food, beverages, energy etc. categories, was 4.3%.

With EM currencies under pressure as concerns over Turkey and Argentina weighed on sentiment, the rand recorded its worst monthly performance in over 2 year, dropping 10.6% MoM (-18.6% YTD). On 24 August, Moody’s Investors Service wrote that SA has been one of the EMs worst affected by Turkey’s slump with both major outflows of equities and debt as well as the falling rand. Amongst the issues Moody’s picked up as reasons for this is SA’s “relatively high wage settlements in the public sector, and ongoing uncertainty about the implementation of land reform.”

In politics, EFF Leader Julius Malema submitted a draft bill to Parliament to nationalise the SA Reserve Bank (SARB), Treasury’s deputy director-general told the Nugent Commission of Inquiry that the VAT hike earlier this year could have been avoided if not for the revenue shortfall at the SA Revenue Service (SARS) and the Zondo Commission into State Capture started its hearings. The commission, tasked with unravelling the full extent of corruption at state institutions amid allegations that ex-President Jacob Zuma used his position to secure deals for the Guptas in return for money, has already heard damning evidence from ex-deputy Finance Minister Mcebisi Jonas and former GCIS CEO Themba Maseko. President Cyril Ramaphosa continued his investment drive, hosting UK Prime Minister Theresa May and departing on a trip to China at month-end with the aim of strengthening bilateral relations and economic ties between the two countries. Expropriation without compensation (EWC) remained on everyone’s minds with even Trump tweeting about it and government doing itself no favours with investors by not clarifying exactly what EWC would entail.

Telkom: Another bite of the cherry? 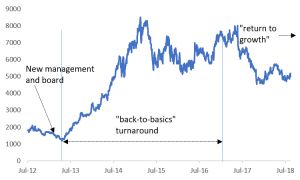 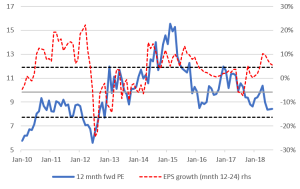 First, let’s put the current state of Telkom in context by giving a brief history. In May 2013, the share price hit an all-time low of R12.00 as the market finally appeared to capitulate after the infamous 2012 AGM. At that AGM, the government (a 40% shareholder in Telkom) flexed its muscles, ousting various board members which in turn led to the resignation of Telkom’s CEO. This was the final straw in what had been a lamentable record over many years from a strategic decision-making and execution perspective – its disastrous decision in 2006 to expand internationally remains a case study in value destruction. In retrospect, however, it is perhaps testimony to the resilience of the fixed-line business that Telkom emerged from this period still with the means to rescue the situation.

The new management team assembled (under Sipho Maseko’s leadership), embarked on a highly effective “back-to-basics” turnaround plan between 2012 to 2016. The plan centred on: (1) re-focusing the mobile strategy and cutting cash burn; (2) rationalising cost (particularly through headcount reductions); and (3) optimising the balance sheet by crystallising legacy defined benefit retirement obligations and moving these to a life assurer. This turnaround drove a strong recovery in both earnings and the share price, which peaked at R85/share.

In the last two years, Telkom has been in a tricky “transitional” phase, bedding down a new organisational structure. An agreement with unions was in place to halt further headcount restructuring for a period. It had to ramp-up investment to modernise its core fixed network (something it has to do roughly every 10 years), which does not immediately translate into revenue. Finally, all this was happening amidst a particularly weak operating environment for a business mainly focussed on the corporate/public sector market rather than the consumer market.

With the share price now back at around the R50/share level and firmly in value territory (with a forward PE multiple of 8.4x and a dividend yield of 7%), we think it provides an interesting entry point ahead of Telkom’s next phase – “return to growth”. Possible catalysts for the share over the next few years include: