Black Friday, which is taking place today (29 November), closely followed by Cyber Monday on 2 December, are two manic shopping days relatively new to the South African (SA) consumer. One version of events regarding the origin of Black Friday is that the day was named by Philadelphia police officers in the 1950s, when large crowds of tourists and shoppers would flood the city the day after Thanksgiving for the Army-Navy football game. For those police officers, not only did they not get the day off from work, they also had to work extra-long shifts to control the chaos in the streets and sporadic shoplifting. It took thirty years for the term to become common across the US to describe the post-Thanksgiving sale.

Takealot and Checkers were the first retailers to introduce Black Friday to local consumers back in 2014 and these two shopping days have since taken our country by storm. According to Black-Friday.Global, in 2018 the Black Friday shopping phenomenon saw a much faster growth rate in SA vs any other country, with a 9,900% jump in interest and a 1,952% rise in Black Friday sales when compared to any other day of the year. Meanwhile, SA price-comparison platform, PriceCheck, writes that in 2017 website traffic shot up from a daily average of 94,000 visits to 290,000 visits on Black Friday.

Figure 1: Sales increases on Black Friday by country vs other shopping days in the year, 2018 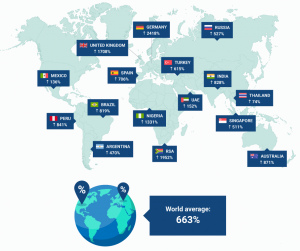 In addition, Black Friday is quickly morphing into a Black November across the globe as more and more sales are held for longer than only one day. Locally, for example, ads for Black Friday deals started weeks ago with some of the big stores even announcing a week (or longer) of deals and every shop being more aggressive than the next in marketing their discounts. As we are all acutely aware, the SA consumer is under enormous pressure – the economy is in the doldrums, having just recently emerged from a technical recession, while problems such as low growth, high unemployment, load shedding, rampant corruption etc. are weighing on businesses and consumers alike. Stats SA’s latest retail sales statistics show that retail sales were subdued during the first nine months of 2019 (9M19), growing at only 1.3% in constant 2015 prices vs 9M18 and signaling that SA retailers are in for tough times ahead. Nevertheless, amid this depressed local economic environment, consumers are still likely to be searching for great deals come Black Friday and to spend money they don’t necessarily have on items they might not necessarily need at both e-commerce and brick-and-mortar retailers.

When retailers make a loss, their books are described as being “in the red”, whereas when they are profitable, they are described as being “in the black”. This is also an apt description for shops on the day, with Black Friday becoming almost as important as Christmas in retailers’ lives. According to Stats SA, historically the most important month of the year for retailers had been December, but in 2018 it was a tough month for local retail (sales volumes dropped by 1.4% YoY), after a much better November, when Black Friday buoyed sales to 2.9% YoY volume growth. Stats SA writes that the Black Friday effect “has been growing in strength in recent years, resulting in a partial shift of sales from December to November.” The benefit of this day to a local economy is not a new realisation, as far back as 1939 US President Franklin D Roosevelt moved the date of Thanksgiving one week earlier in the hope of boosting the US economy in a move now called “Franksgiving”.

We want to make sure that your bank balance also tends more towards black than red. We have written previously that financial behaviour tends to be more emotional than rational and that there are numerous behavioural biases impeding our ability to reason if we don’t understand them and make a conscious effort to work around them (see our article entitled Focus on the Facts dated 11 October 2019) We often act automatically or subconsciously, in response to our emotions rather than rationally and logically by thinking through our decisions. The irony of people storming to the shops the day after giving thanks for everything they have is an article for another day. Today we want to make sure that consumers better understand their cognitive fallacies and the context in which they make decisions on days such as Black Friday as we can only better ourselves by knowing ourselves and the behavioural economics at play during days such as Black Friday is particularly interesting.

Globally, and locally, marketers have created massive hype. The day is, arguably, a glorified sale which has been framed as a special event and once-a-year opportunity. The perception is created that consumers won’t have access to this kind of discount again soon. This is known as framing and ties in closely to scarcity and loss aversion. People fear that they might miss out because not only is it a limited day, often retailers mark the stock itself as limited in edition or availability which may not necessarily be true. This raises the perceived value of the product or service as we all know that scarcity and value are often inextricably linked. Looked at objectively, the discounts might not be that great and seasonal sales aren’t that rare.

Another behavioural phenomenon is that of herding. It is rooted in our evolution to find comfort in fitting in with crowds, and people easily become caught up in the euphoria or behaviour of those around them. Other examples of this kind of mob mentality is the Salem Witch Trials of the 1600s or the fanatical behaviour of sports fans when they are in large groups. The sunk cost fallacy is often also demonstrated in consumer behaviour on this day. A buyer might get up early to queue or load a shopping basket online and then, even if what they initially intended to buy is not available, they end up buying something else as they have already sunk the cost of time or effort spent. In addition to this, it might be painful to part with the first R100 but every additional R10 or R50 is easier to spend. The amount of pain experienced in parting with hard-earned money decreases with every additional increment. Also be aware of the halo effect. It is important to look at every deal in isolation as often people will see one great deal in a shop and assume that all the other sales are great deals as well.

Most importantly, always take cognisance of the fact that, a bargain or a great deal is only such if an individual can afford it! This is probably the most important mantra consumers should repeat to themselves as they get overwhelmed by the sheer number of Black Friday/Cyber Monday deals available. Retail management platform, Vend’s data show that in 2018, there was a significant YoY increase in consumers who made their Black Friday purchases using a credit card – 53% of sales were cash and 45% by credit card (vs 2017’s 58% of cash sales and 36% on credit). This is telling perhaps that, after a very difficult year for local consumers, many chose to take advantage of special offers on credit.

While Black Friday can be a day when consumers get great deals, it is also a day on which shoppers spend money on impulse buying due to marketers using consumers’ behavioural biases to their advantage. In addition to understanding your emotional self, there are some practical tips too. With SA consumers carrying vast amounts of debt, it is important to be smart about what you buy as to not get into further financial difficulty.

Below, we highlight some considerations that will hopefully stop shoppers from spending too much money or from spending money which they don’t necessarily have:

We hope that by highlighting some of the behavioural biases inherent in consumers this will create awareness and as such rational, rather than emotional, decision making. Do not live (and spend) beyond your means, this is especially so when a hyped sale event such as Black Friday takes place, where a person is more inclined to be easily swept up in the frenzy surrounding it.