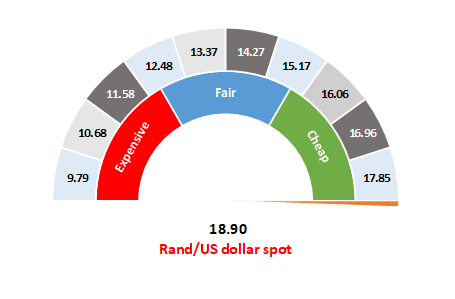 We start Wednesday (22 April) with analysts attempting to digest the impact of the stimulus package announced by President Cyril Ramaphosa in his speech to the nation on Tuesday evening (21 April). At Anchor, we are net positive on both the package and the political messaging in the president’s address. We highlight that the president did not announce prescribed assets or any other move that will increase money supply in South Africa (SA). Therefore, in our view, the key populist risks have been averted.

The R500bn stimulus programme is immense in size and scope, representing c. 10% of our annual GDP. We are very pleased to see that the impact of this on National Treasury is negligible as it has been structured in such a way as to be funding neutral for the country.

The R500bn package comprises of the following:

In addition to the above, the following items were not included in the value of the stimulus package but will nevertheless be of an immense benefit to our economy.

The net increased funding requirement for National Treasury is for R70bn to R100bn. Absent any corruption losses, investing that amount into infrastructure is extremely beneficial to SA. This is an extra 2% or so of debt for the nation, but we think it could be well spent.

Interestingly, the total of the above actually amounts to R650bn in stimulus measures for SA in total, which is substantial at c. 13% of GDP.

We expect that the market will take a while to digest all the president’s announcements, but we see it as marginally positive for both the rand and domestic bonds.

Unfortunately, as we often say, the rand is 80% driven by global developments and 20% by SA events. What an upside-down surprise – domestic events are positive, but global events have turned negative. Financial markets are fretting about the glut in the oil market and whether this means that the global recession will be worse than is currently expected. In the near term, we should see risk assets coming under pressure once again and emerging markets, including SA, will probably be under pressure today (22 April).

Looking at the rand, we note that the local currency remains close to being the most oversold it has ever been in our history. In Figure 2 below, we have included the point at R19.35/$1, which was the weakest rand level ever against the US dollar for visual reference. On the margin, we think that the government’s response has been a net positive and therefore, we maintain our view that in time the rand will recover some lost ground. We continue to believe that the fair value of the rand is c. R15.00/$1. We highlight that the recovery of the local currency can only really take place once the dust has settled after the end of the COVID-19 crisis, which we anticipate being at least six months away. For now, we expect the rand to remain volatile and oversold. 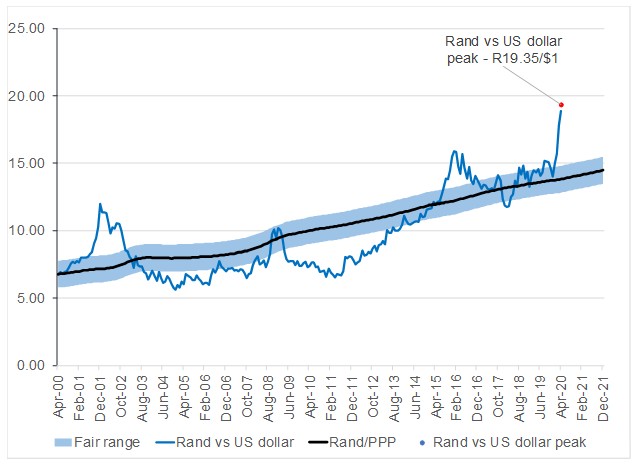