Despite the global COVID-19 pandemic, in 3Q20, South Africa (SA) recorded a record US$3.2bn (+5% YoY) in quarterly agricultural exports. This growth in agricultural exports was primarily underpinned by citrus, wine, maize, nuts, deciduous fruit, and sugar cane. Among the products that featured predominately on the export list for the first three quarters of this year, the aforementioned are further forecast to continue supporting SA’s agricultural exports in 4Q20. Citrus especially has featured prominently throughout this year and exports for 2020 are expected to reach a record 2.5mn tonnes – up 17% YoY. Similarly, wine exports will likely continue to improve in 4Q20, following sales restrictions in the domestic market and a disruption of exports during the more stringent levels of the local lockdown. Notably, this has happened in a season where SA’s wine production was in recovery mode from a volume perspective – 2020’s wine grape harvest is estimated to have increased by 8.2% YoY to 1.3mn tonnes.

Meanwhile, maize exports are following a similar trend, with the Agricultural Business Chamber (Agbiz) forecasting exports of 2.5mn tonnes (+35% YoY), largely driven by the second-biggest maize harvest on record. Earlier this year, stakeholders in the sector were concerned about the logistical challenges at the country’s ports (domestic and receiving ports) and general uncertainty around global trade due to COVID-19 disruptions to global supply chains, and the debilitating effect lockdowns had on consumer demand. However, at an aggregate level, SA’s agricultural sector has benefited from cooperation between government and business in ensuring the functioning of value chains and logistics during the lockdown as is evidenced in the exports data. Overall, the African continent, Asia, and the European Union (EU), constituted the largest markets for SA’s agricultural exports in 3Q20, accounting for 30%, 29%, and 29% in value terms, respectively. The balance of 12% by value was spread across the rest of the world, with the Americas being the dominant region. 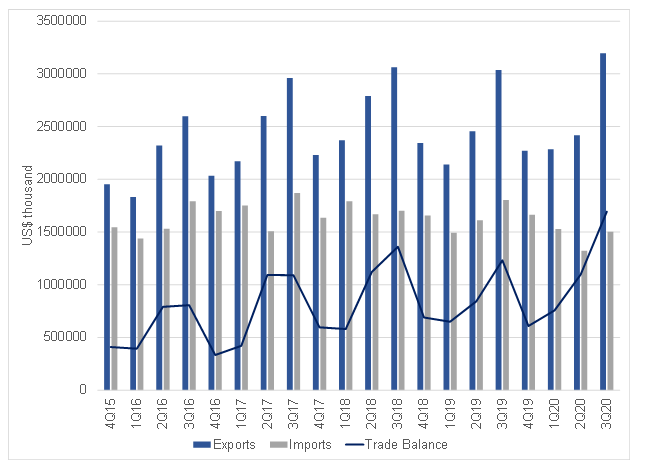 Looking ahead, the most crucial time for SA’s summer crop and certain horticulture products (and by extension the livestock sector) is between October and February each year. This is the summer rainfall period i.e. the determinant of the season’s harvest and veld conditions. The 2020/2021 production season commenced at the beginning of October, with prospects of above-normal rainfall in most regions of the country. This means the possibility of a further large harvest.

In the past, October produced below-normal rainfall, but with La Niña-induced higher rainfall having already started in November, there have been good showers in most regions of the country. The rains have improved soil moisture, primarily in KwaZulu-Natal, the central and northern Eastern Cape, eastern Free State, and parts of Mpumalanga, which has further helped accelerate planting activity.

The optimal planting window for maize and soya beans closed in the week of 20 November in the eastern regions of the country but remains open until mid-December in the central and western regions. Positively, there is now more assurance about the La Niña occurrence after a report published on 6 November by the SA Weather Service, which indicated that “El Niño-Southern Oscillation (ENSO) is now in a La Niña state and the forecast indicates that it will most likely remain and strengthen towards a strong La Niña state from late spring to early autumn (November 2020 to March 2021) … With this strong likelihood of a strong La Niña during summer there are increased chances of above-normal rainfall in the summer rainfall areas.” Furthermore, farmers have generally been encouraged by the favourable weather prospects, as indicated by their intention to lift SA’s summer crop area plantings by 5% YoY to 4.15mn hectares (according to latest CEC estimates). 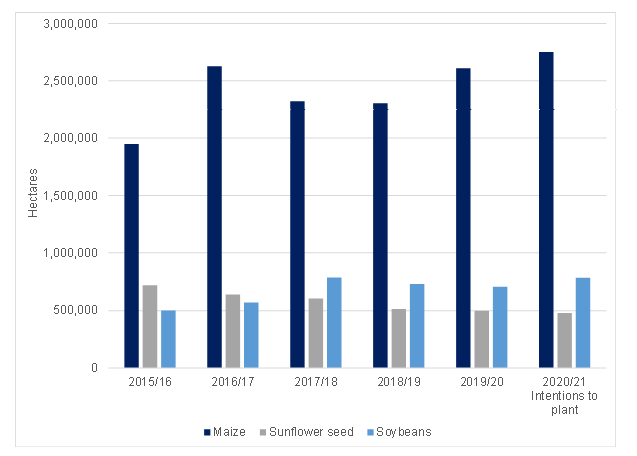 From a global perspective, at the beginning of November the Australian Bureau of Meteorology reaffirmed its forecast of a La Niña occurrence from this year until at least February 2021. While this weather phenomenon presents prospects of higher rainfall and a potentially good agricultural season in SA, other regions of the world may possibly experience the opposite. On the African continent, one such region is East Africa- where the La Niña weather event typically correlates with below-average rainfall from December to February. This is a period just before the start of the summer grains planting season, which is typically in February of each year. Therefore, the current La Niña event has raised the risk of yet another poor agricultural harvest for countries in this region, such as Kenya, Somalia, and Ethiopia. This means that these countries will likely still depend on maize imports in the 2021/22 marketing year. This is an important factor to consider, given that one of the main elements currently driving the maize price in SA is the already high regional demand from Southern Africa, in addition to high demand stemming from deep sea markets such as Japan, Taiwan, South Korea, and China (as it rebuilds its pig herd).

Another region at risk, and which may prove more important for global maize and soybean supplies, is South America. The La Niña weather event typically correlates with dry weather in parts of Argentina and Brazil. The early effects of this are clear in the 2020/21 planting season, which is still underway, with planting progress in these countries lagging the previous years’ pace because of the dry weather. There is also concern that, even when planting is completed, crop yields will likely be much lower because of this. The regions of southern Brazil have already issued warnings with regards to this possibility. Brazil and Argentina collectively account for 14% and 50% of global maize and soybean production, respectively, hence the concerns around crop conditions in this region having implications for both global supply and prices.

Overall, the La Niña weather event in 2020/21 presents varying fortunes for global agriculture across regions. East Africa and parts of South America could see crops being negatively affected this season, while for Southern Africa, La Niña tends to bring higher-than-average rainfall. Therefore, according to both Agbiz and the latest United States Department of Agriculture (USDA) forecasts, there is very little concern regarding local maize supplies at this stage, as SA is expected to harvest over 16mn tonnes of maize in 2020/21, remaining a net exporter.

However, with regards to soybeans, SA remains a net importer of roughly 0.5mn tonnes of soybean meal, the bulk of which originates from Argentina, which means there could be risks for the domestic livestock and poultry producers. Importantly, global price movements will still influence local commodity prices. This is something that the livestock, dairy, and poultry sectors will most certainly be keeping an eye on in the coming months. Overall, entering 2021, the combination of the current favourable export environment (as illustrated by the recent export data) and La Niña appears to bode well for the SA agricultural sector.