It’s clear that economic activity is down meaningfully in China, with some industries completely shut or operating at a fraction of capacity. This is very likely to have a significant impact on the near-term earnings of those companies directly and indirectly impacted. It’s less clear how long it will take for activity to return to normal or how significant the spread of the virus will be beyond China and that uncertainty is spooking investors. However, there are encouraging signs that shipping activity in and out of China is returning to normal levels and that data tend to be a bellwether of international trade activity. Taking a step back, equity investors are usually paying for multiple years’ worth of future earnings and it’s hard to imagine the current slowdown having a meaningful impact beyond a few quarters. So, in theory, significant price reactions to transitory events are usually overdone. Expectations on central banks have also increased dramatically and their ability to meet those expectations are becoming incrementally harder, though central bankers have all indicated a willingness to do what’s required.

So what do we do with our shares?

Issues like this pass with time. For long term investors our default position would be to sit through these events, as in the past markets have snapped back once the worst is over. However, for investors with sensitivity to short-term moves we would consider taking some risk off the table. We would rather do this by selling highly valued shares, rather than buying gold.

There are some specific companies who will be more materially impacted and we are disinvesting from these, where the impact is not factored into valuations.

Global markets are down around 12% from elevated valuation levels and are basically back to where they were three months ago. So, in aggregate, this market dip is not presenting an attractive valuation opportunity – valuations are now broadly in line with 10-year averages, with some short-term earnings risk. We believe it is too early to “buy the dip”, but we are watching certain equities carefully as buying opportunities at another notch down.

The local market is somewhat different – the “SA-inc” portion of the JSE was already trading at extremely low valuations – with many big companies at 5-year lows or worse. The SA market will follow the rest of the world down, but some once-in-a-decade opportunities are surfacing. Our analysts are hard at work firming up the buy-list … but we are not in a hurry!

The story so far

It’s been about 6 weeks since news started breaking of the impact of the current strain of the Wuhan coronavirus (2019-nCoV), which saw its firstly fatality on 9 January. The virus causes a lung illness dubbed Covid-19. Since news started gathering momentum around 21 January, we’ve had reports of c. 82,000 confirmed cases around the world and 2,801 deaths globally. 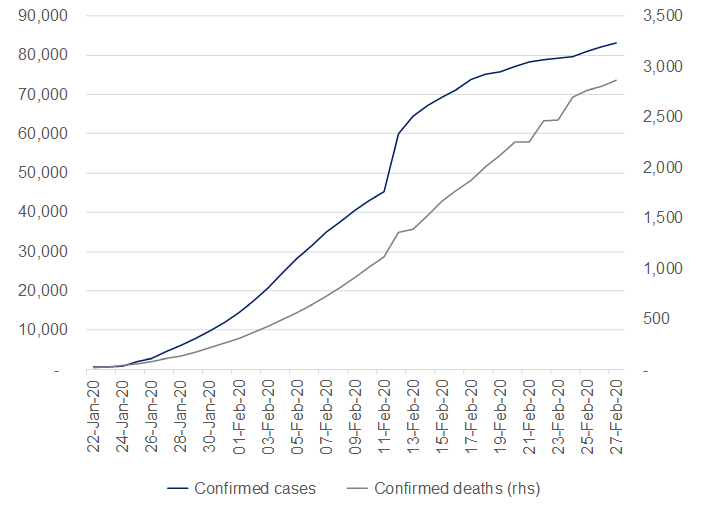 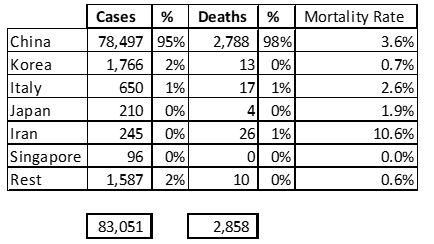 As it currently stands, the virus is the deadliest of its kind in Asia for at least the past 70 years.

Figure 3: Comparison to previous Asian viruses and their impact 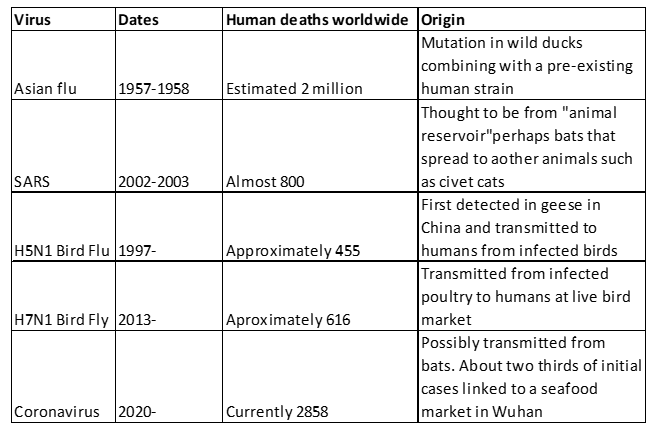 Many experts have attempted to forecast the ultimate spread of the virus and, while the World Health Organisation (WHO) has declared the outbreak a global health emergency (this helps mobilise international responses), it is not yet calling it a pandemic.

The Chinese government has imposed a quarantine on the city of Wuhan (with its 11mn inhabitants) and more than a dozen other cities in China, with approximately 50mn people being restricted mainly to their homes. Countries including the US, Australia and India have denied or restricted entry for non-citizens arriving from China and many countries are now also restricting travel to and from Italy.

The purpose of this note is to explore the potential impact on global economic activity as a result of the restrictions on movement of people and how asset prices have responded since news of the virus first dominated headlines.

In an analysis that predates the current outbreak, the World Bank reckons a destructive pandemic could result in millions of deaths, and points to how even conservative estimates suggest such an experience might destroy as much as 1% of global GDP. A disastrous health crisis akin to the 1918 Spanish flu, which may have killed as many as 50mn people, could cost 5% of global GDP, the Washington-based lender said in a 2015 report. The IMF currently forecasts only a negative 0.1% impact on global economic growth.

Data from China’s Ministry of Transport suggest that passenger travel by road, rail and air has been operating at levels 75%–85% lower than usual since the start of the outbreak. China is responsible for c. 15% of global oil demand and this demand has dropped by at least one-third since the outbreak started, causing a 21% drop in the price of Brent crude oil.

DM and EM equities are down 9.5% and 8.5%, respectively, since the start of the outbreak.

Most EM currencies are 4%–7% weaker against the US dollar since the start of the outbreak. 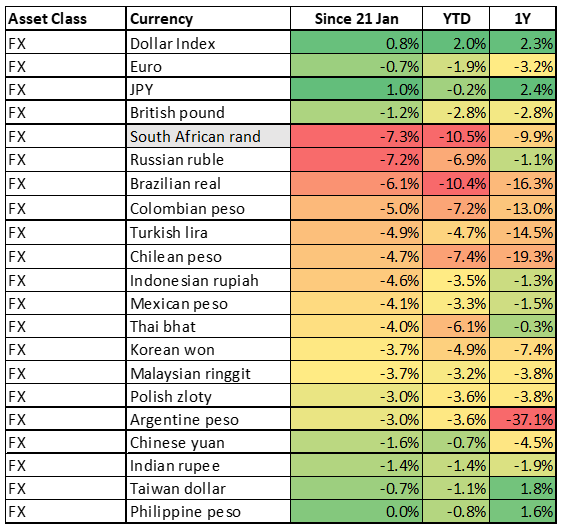 The companies most impacted by the new coronavirus tend to be travel, travel-related and luxury goods companies, where purchases are often associated with travel.

US 10-year government bond yields have also reached an all-time low of 1.23%,

Figure 9: New coronavirus: Impact on US rates and the shape of the US yield curve 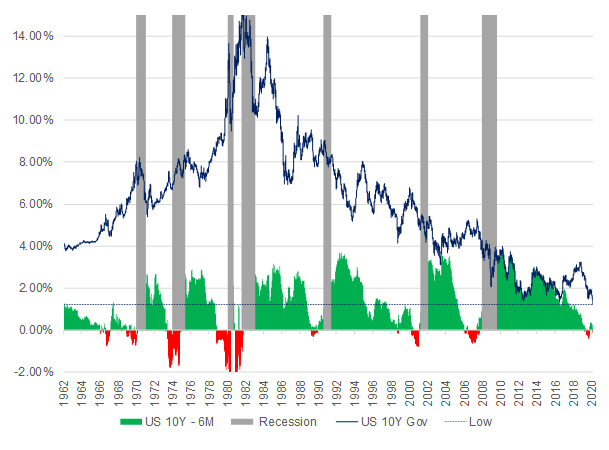 Meanwhile, markets have moved to pricing in at least two rates cuts by the US Fed in the next few months.

Figure 11: Gold has rallied as investors flock to safe-haven assets

Figure 12: Gold miners have benefited from a rally in the gold price

Figure 13: Oil and diversified mining companies are amongst the most negatively impacted