Warren Buffett, who serves as the chairman and CEO of Berkshire Hathaway, is arguably one of the most well-known investors in the world. He is also the world’s third-richest person and has been referred to as the “Wizard”, “Oracle”, or “Sage” of Omaha by the media and is known for his adherence to value investing and personal frugality despite his immense wealth. His fundamental principle is “to buy great companies at good prices and hold them forever.”

Berkshire Hathaway owns a very small selection of very large positions and according to its latest 13F filing (quarterly report), the firm had its usual low turnover rate (in terms of companies it owns) in 3Q18, adding just four new positions to its portfolio and selling off two old ones. Nearly 70% of Berkshire’s portfolio is invested in finance and tech stocks, while consumer staples shares, which had previously accounted for 40%-plus of the portfolio, fell further out of favour, declining to a less than a 17% weighting. The Economist wrote early this year that over the past five years, Berkshire’s book value has grown at a compound annual rate of 11%, while between 1965 and 2017 its stock portfolio posted a 20.9% compounded annual gain vs a 9.9% gain for the S&P 500 (with dividends included).

Last week, GuruFocus highlighted Buffett’s current (3Q18) top-5 holdings in the Berkshire portfolio, showing that Apple and Bank of America (BofA) were in first and second spots, respectively, followed by Wells Fargo, which until 3Q18 was the number-two holding, in third position. Coca-Cola and Kraft Heinz were in fourth and fifth spots, respectively. These five stock positions account for c. 65% of Buffett’s $221.02bn portfolio and although their positions might have changed, these shares have remained the same since mid-2017. While Buffett’s shift toward technology has seen the dominance of his Apple position, he continues to favour financials and consumer staples heading into 2019 as he has for decades.

Buffet’s current top-five holdings have a few things in common – they are all large, well-run companies with strong balance sheets, generating significant cash which is returned to shareholders via dividends.

As at the end of 3Q18, Buffett has invested the most money in the following shares:

Apple accounts for 25.79% of the portfolio (vs 14.41% in 3Q17) – Buffett’s top position. At the end of 3Q18, Berkshire Hathaway owned c. 252.5mn Apple shares or a 9.5% stake. It has purchased Apple shares in almost every quarter since 2Q16 (Buffet first purchased Apple shares in May 2016 at an average price of $109/share). The Apple share price had been on an upward trajectory this year until around November when the share price started coming under significant pressure and falling well below its notable $1trn market cap. YTD, the share price is now down 0.4% (to Tuesday [11 December’s] close). A large part of the Apple share price drop has to do with reports that the company told its supply chain to cut orders by up to 30%, which drove concerns around iPhone demand. Investors are also concerned about the firm’s lack of new products and an announcement that it would no longer report quarterly iPhone sales figures did not help. 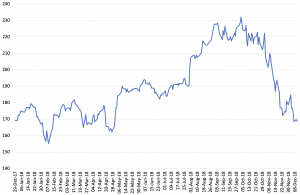 Buffett holds 877.3mn shares, or 5.32% of the bank. He initially invested $5bn (with a right to buy 700mn shares by warrant conversion) into the then-struggling bank in 2011, purchasing the shares at around $7.14/share, well below their trading price of $25.56/share at close Tuesday (11 December). In October last year, Buffett told CNBC that he would own the stock for a “long, long, long time”, adding that “Bank of America has done a sensational job under [CEO] Brian Moynihan,”. According to GuruFocus, over the past five years, BofA has grown revenue at a rate of 1%, earnings at a rate of 40% and book value at 3.8%, on average. Yet it trades with its lowest price-book ratio in a year at 1.17. In 3Q18, BofA revenue rose 4% YoY to $22.8bn, with diluted EPS up 42% YoY to USc66. 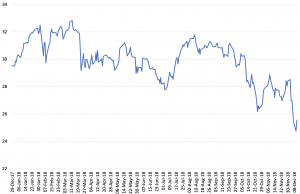 In 3Q18, Buffett reduced his holding of Wells Fargo by 2.14%, keeping it at 9.4% – within his 10% limit. He held 442.36mn shares at quarter-end. The Wells Fargo holding dates back to 1989 (and the share was his top holding for several years), when the price traded under $3/share. Wells closed Tuesday (11 December) at $47.76, down 21.3% YTD. For 3Q18, the bank delivered c. flat revenue growth, at $21.9bn vs $21.8bn in 3Q17. Net income rose to $6bn from $4.5bn. CEO Tim Sloan attributed the results to “transformational changes” the bank is making, including lowering expenses, and better business trends, such as increased consumer checking customers, debit and credit card use and loan origination. Wells’ price-book ratio also declined to its lowest level in two years at 1.46. Its PE ratio of c. 12.2 and price-sales ratio of 3.1 are both near two-year lows. 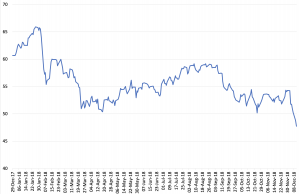 Buffett has been invested in Coca-Cola since 1988, once saying that he drinks about five cans of Coca-Cola per day. At the end of 3Q18, this holding accounted for 9.4% of the portfolio. In recent years, Coke has been struggling to adapt to changing consumer tastes and increasing health consciousness among consumers. However, this year investors seem to have approved of the company’s efforts, sending the share price c. 8% higher YTD to close at $49.54/ share on Tuesday (11 December). In its 3Q18 results, Coca-Cola reported a 9% YoY drop in revenue largely due to refranchising its bottling operations, while organic revenues grew 6% YoY. EPS from continuing operations jumped 62% YoY to USc54. GuruFocus data show that the company is trading close to a 10-year high, with a price-book ratio of 11.75 and price-sales ratio of 6.71 – both also near their respective 10-year highs. 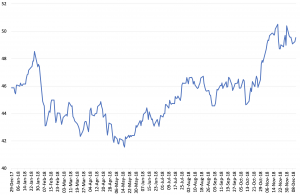 Buffett has held 325.6mn (c. 26.7% of the company) Kraft Heinz Co. shares since 3Q15 but the holding has been downgraded to fifth place from a third position previously. Unlike with other stakes in listed firms, Buffett took a more hands-on approach at the packaged food giant, even backing the merger between Kraft Foods and Heinz that created it and also served on the board until April 2018. The company has faced headwinds of changing consumer preferences and increased commodity costs as well as stronger competition from newer brands which has seen its share price drop by 37.8% YTD, closing Tuesday at $48.38. In its 3Q18 results, the firm reported a 1.6% YoY increase in net sales to $6.4bn, while net income fell 33.8% YoY to $630mn, or USc51/ share. The company attributed this to its efforts to fight back against changing currents with commercial investments and marketing. At the end of November, Kraft Heinz furthered its shift in focus by acquiring Primal Kitchen, which it called a “young, vibrant, better-for-you brand” of condiments and oils. The company hopes the acquisition will give health-conscious millennial and Gen X consumers a reason to consider purchasing Kraft Heinz products and help it shake off a somewhat dull image that has plagued tit for years. Kraft Heinz trades at historical low valuations and, in addition to a c. five-year low share price, Kraft Heinz has a PE ratio of 6.0, price-book ratio of 0.95 and price-sales ratio of 2.37 – each also close to five-year lows. 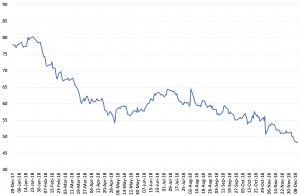 Below we highlight Berkshire’s largest 10 holdings by market value as at 3Q18. 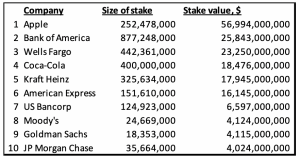