US toy industry: Which retailer will pick up the Toys ‘R’ Us slice of the pie?

The NPD Group currently values the US toy industry at c. $28bn. For 1H18, NPD data show the industry grew US sales by 7% YoY to $7.9bn (this period included the beginning and end of the Toys ‘R’ Us liquidation). The notable turnaround to positive growth (which is continuing into the second half of this year) vs 2017 has been primarily attributed to the US box office, as movie releases including Black Panther in February, Avengers Infinity War in April, and Jurassic World: Fallen Kingdom at the end of June, buoyed sales (YTD, the action figures and accessories category, for example, saw sales jump 16% YoY).

Toys ‘R’ Us had an overall US market share of 15% and generated $7bn-plus in US sales for the year ended January 2017. It was the largest online pure-play toy retailer, according to Internet Retailer, with sales representing 37% of the total $4.6bn in online toy sales. According to MarketWatch, the retailer also recorded an impressive $2bn in sales during the last two months of 2017, including more than $1.4bn in sales for December alone. Now, with the Toys ‘R’ US demise (we note there have been media reports that the brand might be revived), the question is which major US retailer will grab the largest slice of this 15% pie (especially in the very lucrative last two months of 2018).

This year we expect to see major retailers such as Amazon, Walmart, Target, Kohl’s, JC Penney etc. vying for the toy market dollars Toys ‘R’ Us has left on the table and rushing to fill the void left by the latter’s bankruptcy. While brick-and-mortar retailers are setting aside significantly more floor space for toys (Walmart has said it is expanding its assortment of toys by 30% at all brick-and-mortar locations), Amazon is e-mailing toy catalogues to millions of US households and also distributing these catalogues out of its Whole Foods stores in an effort to reach more consumers. Market Watch writes that while Amazon is likely to grow toy sales on the back of the Toys ‘R’ Us closures, Walmart and Target especially look set to enjoy disproportionate gains. However, according to The Wall Street Journal, these retailers also want to get “just the right mix of inventory” ahead of the all-important US holiday shopping season which runs from late November to early January. The risk for large retail chains lies in overshooting (in terms of inventory) and then being forced to sell stock after the holiday season at far lower prices.

Earlier this year, Coresight Research released the results of a survey among previous Toys ‘R’ Us shoppers that browsed other stores for toys in the past 12 months (surveyed 15-21 March 2018). The intent was to determine which other retailers these shoppers browsed or bought toys and games from, to get an indication which US retailers are most likely to get Toys ‘R’ Us’ slice of the pie. The survey found that Walmart and Amazon were tied at the top of this list (see Figure 1), with 65.4% of Toys ‘R’ Us shoppers having looked at these stores as well, while Target came in third at 63.6%, and general dollar stores totaled 29.8% of shoppers. The findings also showed that dollar stores, department stores, eBay and Costco could chalk up gains as a result of Toys ‘R’ Us closures.

Figure 1: Retailers where Toys ‘R’ Us shoppers browsed for toys in past 12 months 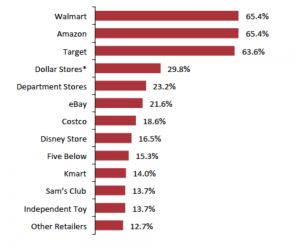 *Defined in the survey as Dollar General, Dollar Tree, Family Dollar and 99 Cents Only

Figure 2: Top-5 retailers* where Toys ‘R’ Us shoppers and ALL shoppers bought toys in past 12 months: 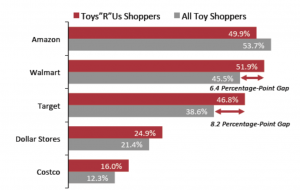 So, while Amazon is well placed to benefit from Prime members who had been shopping at Toys ‘R’ Us, the findings suggest that Amazon’s dependence on Prime members may limit its ability to acquire former Toys ‘R’ Us customers.

Barron’s quotes Credit Suisse analyst Seth Sigman as writing that several retailers should benefit in 2H18 from the demise of Toys ‘R’ Us. Sigman believes that, in terms of comparable sales, Target may get the biggest boost,  estimating that the Toys ‘R’ Us closures will add 70 bpts to Target’s 2H18 same-store sales. However, in strictly dollar terms he sees Walmart as being the biggest beneficiary, although because of its size, the sales increase won’t do much to boost its overall top line (Walmart recorded R485bn in overall FY17 sales). Amazon inevitably also looks like it will pick up a lot of the sales, with Barron’s noting it has the “highest web traffic overlap” with Toys ‘R’ Us. Elsewhere, research firm Jefferies writes that Amazon sold c. $2.2bn of toys in the last two months of 2017, and that was with Toys ‘R’ Us as a competitor. Now with Toys ‘R’ Us having faltered, Amazon’s share “may grow even larger.” Morningstar expects Amazon could rake in c. $2bn-$3bn extra in sales this year out of Toys ‘R’ Us’ demise with the rest going to Walmart, Target, dollar stores and to direct sales from toy manufacturers.

While none of the above are conclusive findings it will be interesting to see which of these retailers emerge victorious once the lucrative US holiday sales are tallied in January. Getting a large chunk of Toys ‘R’ Us’ takings, may not move the needle for the likes of Amazon, Walmart etc., with their billion-dollars revenues, but it is nevertheless money earned for very little or no effort.

As an aside, we note though that the positive momentum the toy industry is experiencing this year may be short lived as the industry faces several challenges in future, not the least of which is being pulled into the Trump administration’s tariff battle with China. About 85% of toys sold in the US are made in China, according to Toy Association data and, although those products have thus far escaped the escalating trade war between China and the Trump administration, CNN highlights that the next round of tariffs is expected to include all imports from China that haven’t already been taxed.