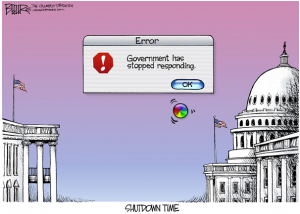 The United States federal government has a fiscal year that runs for 12 months from 1 October each year. Every year congress must pass an appropriation bill to approve funding for each of the 12 federal government departments which must then be signed by the president. If the appropriations bills aren’t passed by congress and signed off by the president (who has veto power to reject the bills), then the federal employees and government contractors in those departments can’t get paid. US postal workers and Federal reserve bank employees don’t receive funding via appropriations bills and as such don’t get affected by the shutdown.

There have been 13 government shutdowns dating back to 1981, though only 3 have lasted more than a week and before this the longest one was 21 days (in 1995/1996 under president Bill Clinton).

Why is it happening?

Only 5 of the 12 government departments had appropriations bills in place by the 1 October 2018 deadline for the current financial year. From 1 October until 22 December the remaining 7 government departments were being funded by short term extensions. On 22 December president Trump refused to sign any more extensions if the bills didn’t include $ 5.7 bln of funding for expanding the border wall with Mexico. The US Congress is made up of the Senate (currently controlled by the Republicans) and the House (currently controlled by the Democrats). The Democrats in the House are refusing to pass any appropriations bills that include more than $ 1.6 billion of funding for the expansions.

What do the voters think?

A recent poll by Pew Research Center suggests that most US voters believe the shutdown is “very serious”. Donald Trump and Republicans in congress are seen overwhelmingly as the villains in this drama.

Despite voter disapproval of the handling of this matter, sentiment around the need to substantially expand the border wall with Mexico is a strongly partisan issue. Most (82%) of Trump’s supporters (Republican voters) are still firmly of the view that a substantial expansion of the border wall is necessary (even more so than when Trump was first elected, when only 62% of republican voters backed the idea). Democratic voters are firmly opposed to the idea with only 6% of Democrats thinking it’s a good idea. 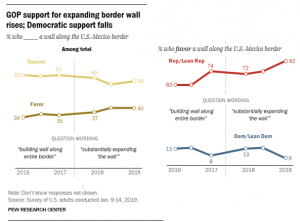 The shutdown impacts seven US federal departments without a signed appropriations bill representing about 25% of US federal budget spending and roughly 800,000 employees (0.5% of the 163 mil US labour force workers). All employees in those departments do not get paid while the government is shut down. In addition to the Americans employed directly by the federal government, about 1.2 mil contractors (0.7% of the US labour force) are also working for the federal government and won’t get paid during the shutdown.

President Trump has already signed a bill allowing federal employees to receive back pay once the government re-opens (similar to what has happened in all previous shutdowns). Contractors will not receive backpay.

The impact of the shutdown includes:

Depending on the length of the shutdown it could start impacting the timing of about $ 140 bln of tax refunds. If the shutdown goes on into March it may also affect the payment of subsidies to 38 million American who need government aid to purchase food.

Roughly half of the federal employees affected are considered essential workers, like air traffic controllers and US airport screeners and are required to work without pay.

Until recently it was estimated that US economic growth would be negatively affect by about 0.05% for each week of the government shutdown. Kevin Hassett (chair of the White House Council of Economic Advisers) has recently said that doesn’t factor in the impact of contractors not being paid and the new estimate is a negative impact of about 0.13% on economic growth for each week the government is shutdown.

Analysts estimate that the shutdown will continue until mid-February which would imply about 0.8% of economic growth sacrificed, though around half of this could be clawed back when employees receive back pay. For context, economists expect the US economy to grow by about 2.5% in 2019 (some already factoring in a lower number to adjust for the shutdown), so its likely that the US economy will still grow by more than 2% this year despite the shutdown.

The $ 5.7 bln being haggled over is tiny in relation to the US federal budget and largely symbolic. Even if the shutdown drags into February, making it the longest shutdown by a factor of 3 times, its unlikely to have a material impact on economic growth. The bigger risk comes from the potential impact to US consumer confidence at a time when an ageing economic expansion is being rattled by geopolitical risks including trade wars and Brexit. For now, no reason to panic provided this distraction doesn’t drag on into March and other geopolitical risks don’t escalate.