Trade tensions between the US and Europe have been simmering at a fairly low level for several years now after the World Trade Organisation (WTO) revealed the world’s largest aircraft manufacturers, Airbus (based in Europe) and Boeing (US-based) had benefitted from billions of dollars in unfair subsidies dating back to 2004. In October 2019, the WTO gave the US the go-ahead to levy c. $7.5bn in tariffs on the European Union (EU), mainly targeting aircraft parts and luxury goods. Meanwhile, the WTO is expected to allow the EU to adopt a tit-for-tat response in July over the US government’s support of Boeing. However, this latest flare-up in the ongoing trade spats between the US and the EU is also partially in response to the some EU member states (France, Austria and Italy) imposing digital taxes on US tech companies. The spat has included threats from the Trump administration earlier this year that it was considering tariffs on cars and car parts, one of the EU’s largest export categories to the US. In light of the escalating trade tensions, we look at the trading relationship between the two parties and those products that could be impacted.

In Figure 1 below, we highlight the main categories of EU/US trade. 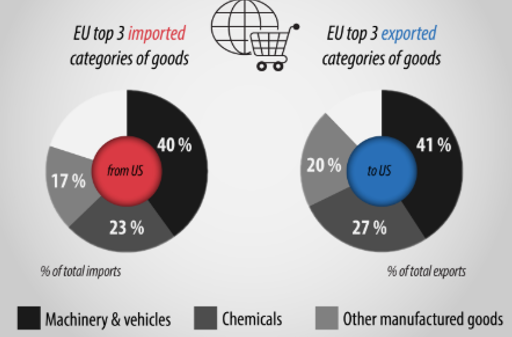 Figure 2: The most traded products between EU-27 member countries and the US in 2019, EURbn 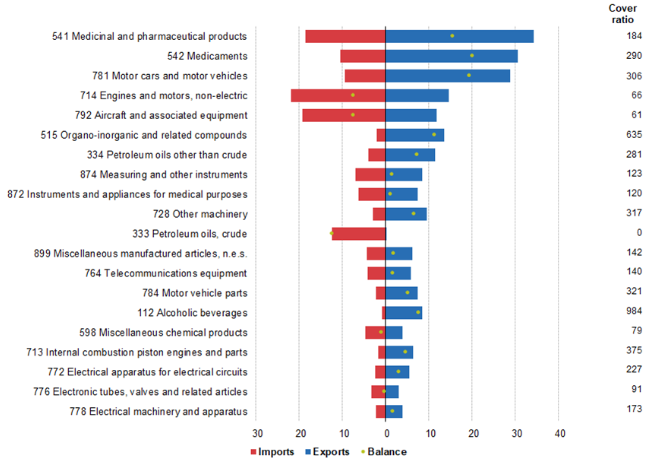 On 23 June, the US Trade Representative Robert Lighthizer published a notice stating that the Trump administration is considering imposing tariffs on c. $3.1bn of imports from Europe (the UK left the EU as of February this year, but that country is still included in this set of proposed tariffs). If it does happen, this will affect less than 1% of EU exports to the US but it threatens to escalate into a broader trade war. The proposed list includes: i) new tariffs on olives, beer, gin and trucks; ii) increased tariffs on aircraft, cheese and yoghurt.

This is part of a broader review of US tariffs on EU goods in retaliation for the EU’s illegal Airbus subsidies mentioned earlier. These tariffs would likely start in September when the WTO is expected to have come to a decision on whether the EU can impose sanctions on $11.2bn worth of US imports (c. 4% of US imports into the EU). Ironically, this is in retaliation for the US’ illegal subsidies of Boeing. Both the US and the EU have been fighting illegal aircraft subsidies through the WTO for 15 years.

Lighthizer is also looking to increase pressure on the EU by using a tactic called “carousel retaliation”, which involves periodically shifting tariffs to different goods and potentially increasing the level of tariffs as well. This spreads the pain across multiple industries, creates huge uncertainty for business and causes major headaches for importers and exporters.

Despite the US’ tariff threats against goods imported from Europe and the likelihood that the latter will retaliate, we believe that this is much ado about nothing and we are not expecting a trade war between these economic giants anywhere close to the scale of the US-China trade war.