US election 2020: Four more years or a blue sweep and the implications for markets

Election results could be finalised by around 8am SA time on 4 November 2020 although, with a large contingent of mail-in votes, it is extremely likely that the final result will be delayed by days, or even weeks, if there are legal challenges.

A US president is elected every 4 years and can serve a maximum of 2 consecutive terms, so the incumbent Republican president (Trump) is eligible for another term and will face off against his Democratic challenger Joe Biden. 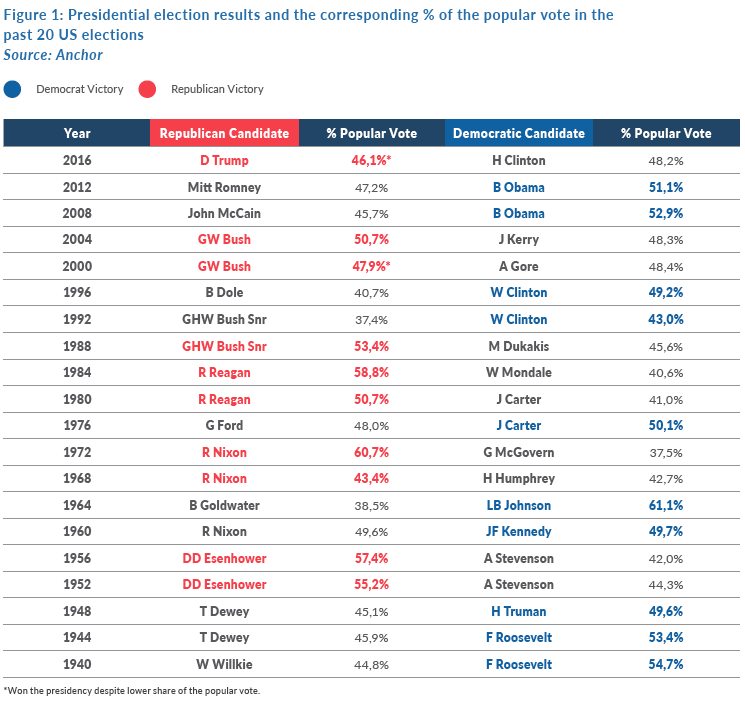 The US Congress is made up of two chambers – the Senate, and the House. They have power over the budget (taxation and government spending) and creating laws.

a) Senate: 100 seats – each of the 50 states have two senators who serve a six-year term (votes are staggered so roughly one-third of senators are elected every two years).

b) House of Representatives: 435 seats with each state getting allocated seats roughly in proportion to their population (with a minimum of 1 seat per state). Representatives serve two-year terms.

The current state of play 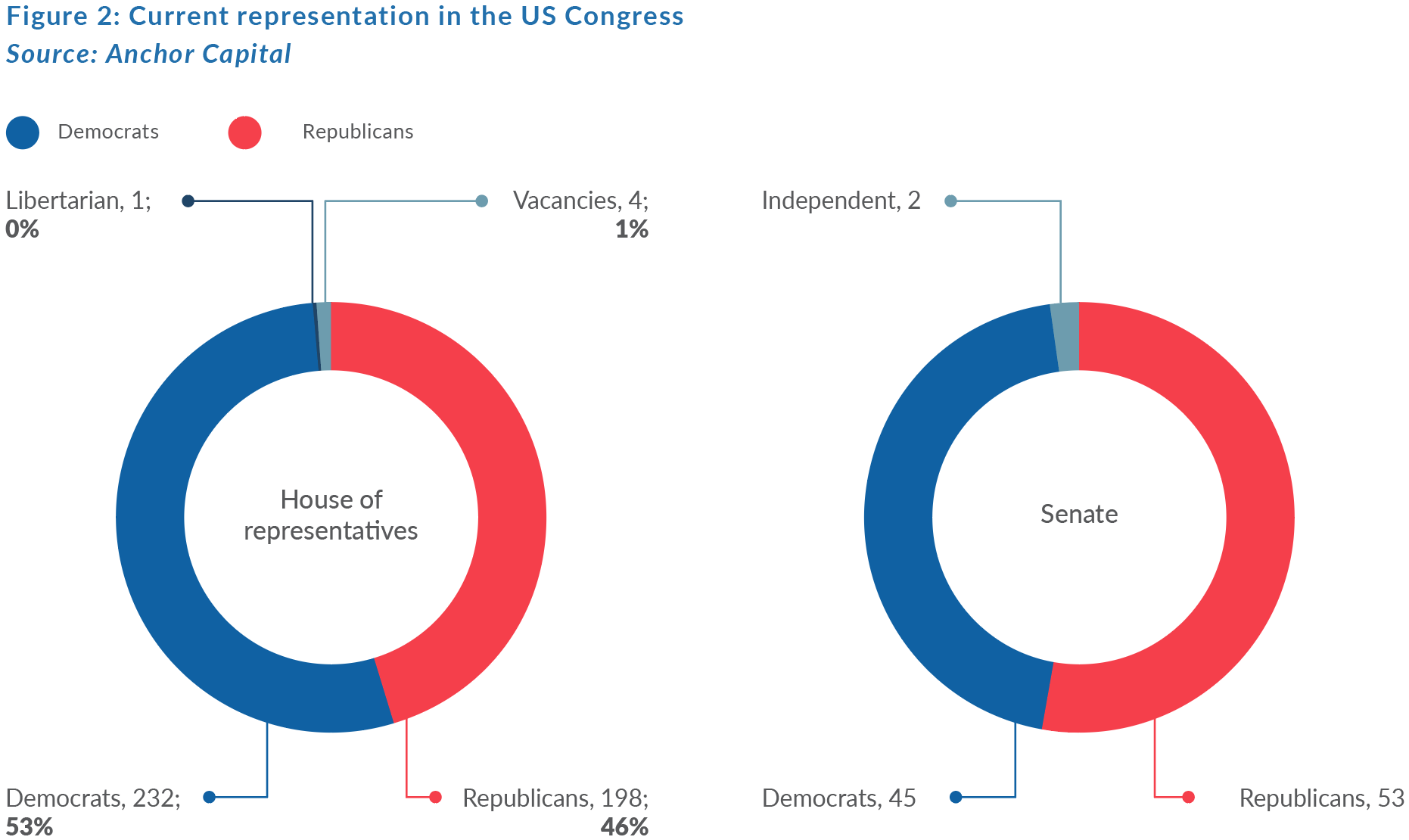 We analyse the elections in three sections: The Presidential Election, Senate elections, and House of Representatives elections, each of which has slightly different implications for what happens over the next four years.

Polling aggregates have Joe Biden slightly ahead at 52% vs. 42%, while the betting markets have a significantly bigger lead for Biden.

However, as described above, based on the electoral vote system, the popular vote is not always a good indicator of the outcome of the Presidential Election and we will discuss that under the “swing states” section later in this note.

Betting odds currently have a 68% chance of the Democrats ending up with control of the Senate. 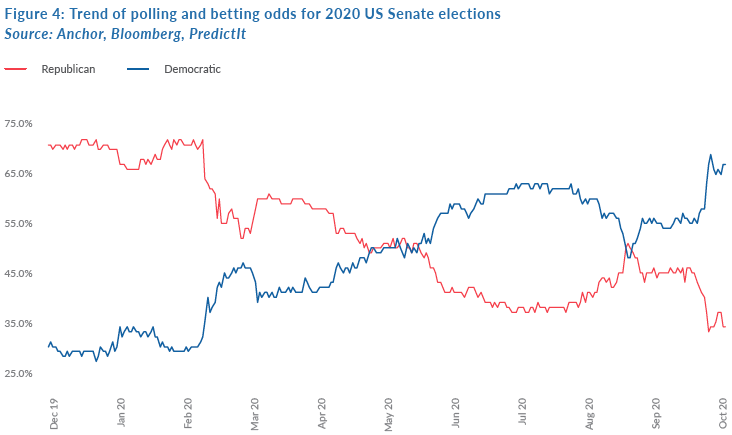 The Senate is currently controlled by the Republicans.

Class 2 senators are up for election in November, along with 2 seats which are vacant because of a death and a resignation, so there are 35 Senate seats up for grabs at this election. At least 7 of those are going to be a very close call, leaving the outcome quite tightly balanced. The 2 independent seats in the Senate (which are not up for grabs), typically vote with the Democrats. Should the Senate end up evenly split (50 seats each), the outcome of the Presidential Election becomes even more important as the vice president gets the deciding vote when there is a tie in Senate voting.

The House of Representatives

Democrats currently control the House and are expected to comfortably keep that control. 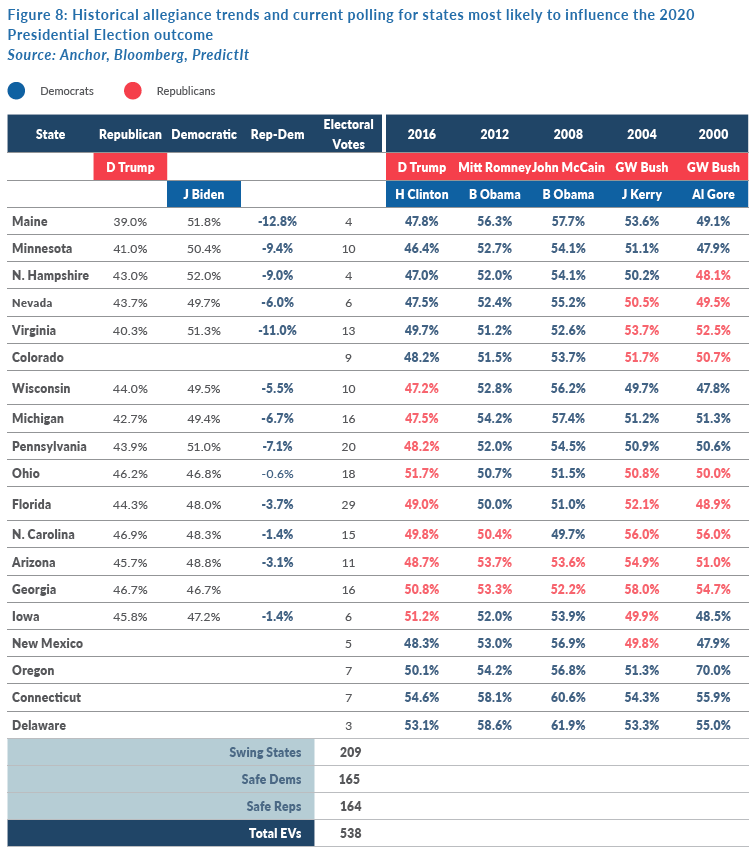 Usually, the incumbent is at a distinct advantage when running for a second term. In the past 100 years only four US presidents have failed to win re-election. 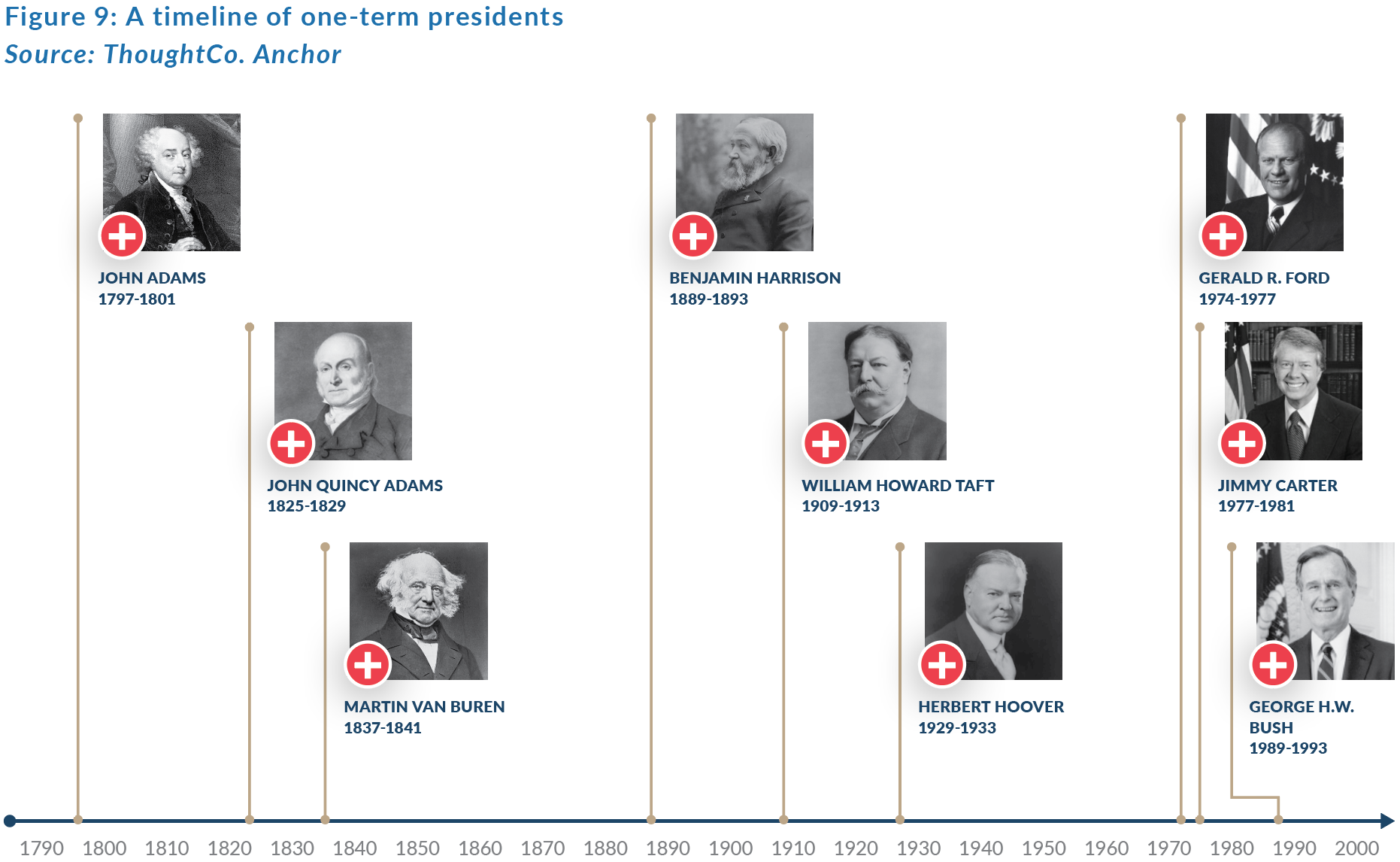 Herbert Hoover bore the brunt of the public’s frustration with the economic pain of the Great Depression during his first term, the other three presidents who could not win a second term were all in the past 50 years.

Bush’s official White House biography describes his re-election loss this way: “Despite unprecedented popularity from this military and diplomatic triumphs, Bush was unable to withstand discontent at home from a faltering economy, rising violence in inner cities, and continued high deficit spending. In 1992, he lost his bid for re-election to Democrat William Clinton.”

Carter’s White House biography blames several factors for his defeat, not the least of which was the hostage-taking of US Embassy staff in Iran, which dominated the news during the last 14 months of Carter’s administration. “The consequences of Iran’s holding Americans captive, together with continuing inflation at home, contributed to Carter’s defeat in 1980. Even then, he continued the difficult negotiations over the hostages.”

Ford was never elected by the public as US president, he was appointed vice president when Spiro Agnew resigned and then became president when Richard Nixon resigned over his involvement in the Watergate scandal. “Ford was confronted with almost insuperable tasks,” his White House biography states. “There were the challenges of mastering inflation, reviving a depressed economy, solving chronic energy shortages, and trying to ensure world peace.” In the end, he could not overcome those challenges.

Mail-in votes: The US Postal Service (USPS) finds itself as one of the top issues for this Presidential Election, primarily as a result of the coronavirus which has put the postal service’s balance sheet under pressure and increased the appeal of mail-in voting to avoid the risk of infection at crowded polling stations.

Mail-in voting/absentee voting has been around since the American Civil War for voters who cannot be physically present at their local voting station on voting day. Voters apply to receive a ballot form in advance of voting day, which they complete and mail in.

States tend to have differing legislation around who is eligible for mail-in voting. These range from “universal vote-by-mail” (where ballot forms are automatically sent to all voters), while at the opposite end of the spectrum some states require applicants for vote-by-mail to prove they have an approved reason for mail-in voting (away on voting day, elderly, disabled, or incarcerated). There are also differences in how mail-in voting forms are verified, with some states requiring signatures on ballot envelopes which must be checked against signatures on record, while other states do not check signatures.

In general, Democrats favour looser rules around mail-in voting, since mail-in voting is usually associated with a higher voter turnout, particularly among low-income voters, which tends to favour the Democrats. Trump has pushed back on mail-in voting, suggesting that it is “inaccurate and fraudulent”. Republicans are trying to use the fragile state of the USPS financial situation as a reason why broader access to mail-in voting cannot work, blocking attempts by Democrats to pass funding bills that will help subsidise more mail-in voting.

Trump’s biggest challenge for this campaign is convincing Americans that his handling of the pandemic was sufficient and that he has been able to get the economy back on track. His policies are largely more of the same:

Biden
(Restore the Soul of America, Build Back Better, and Unite for a Better America)

Biden will attempt to cast aspersions on Trump’s handling of the pandemic and offer up a change in direction on policies:

The potential impact on markets

Markets generally do not love uncertainty and there is a strong chance that this election result will be delayed due to mail-in voting and legal challenges. The last time the US had a close election where the result was delayed because of legal challenges was in the 2000 Presidential Election, where the result in Florida was ultimately decided by the Supreme Court more than a month after voting day. In the weeks after the vote, the S&P 500 fell c. 8% as investors waited for the outcome to be decided. This time around, the expectation of delays may take the edge off the uncertainty, but it is likely to still result in some market jitters. Markets are already anticipating lots of this uncertainty as the cost of hedging against equity market corrections around the time of the election is around 20% higher than current levels.

(A Democratic sweep or blue wave) is likely to result in the biggest policy changes as Democrats pursue their policies aggressively, reversing course on those policies implemented during the Trump years.

Scenario B and C

(Where the Senate and the Presidency are split) will make it difficult for either party to pursue their agenda robustly and very little incremental policy changes will likely ensue.

(The status quo) is unlikely to see significant changes in policy as the Republicans maintain course on existing policies.

Polling currently suggests that Scenario A is the most likely outcome and, as markets are generally forward looking, it is probably fair to say that this outcome is already reflected to a certain extent in current asset prices.

These are the sectors and asset classes we think are most likely to be impacted by the elections:

The biggest threats to Big Tech are: