Data released this week by Adobe Analytics show that more people shopped online for deals on Black Friday (23 November) and Cyber Monday (26 November) in the US than ever before. According to Adobe Analytics, Black Friday alone recorded $6.22bn in online sales, up 23.6% YoY and a new record high (in 2017 online shoppers spent $5.03bn). Meanwhile, Cyber Monday online sales also surged to a new high, as a record $7.9bn was spent online (+19.3% YoY). Adobe tracks transactions for 80 of the top-100 US internet retailers including Walmart and Amazon. Friday was also the first day in history to see more than $2bn in sales coming from smartphones (mobile devices), with 33.5% of e-commerce transactions on the day coming from mobile devices, vs 2017’s 29.1%. From Black Friday to Cyber Monday, consumers spent $4bn-plus using mobile with more retail traffic coming from mobile devices than from desktop computers. So-called click-and-collect orders, where shoppers buy online and then collect at the store, proved to be a particularly popular option with these type of orders rocketing 65% YoY this past Cyber Monday, Adobe said. Saturday and Sunday, 24-25 November, set a new record as the US’ biggest online shopping weekend ($6.4bn) growing faster than Black Friday and Cyber Monday with more than 25% growth on each day. As expected, ShopperTrak found that store foot traffic was down 1% YoY due to the continued shift to make online purchases (many stores also put their best deals online).

Amazon, which in a July 2018 eMarketer survey was expected to take c. 50% of the US e-commerce market by the end of this year, indicated on Tuesday (27 November) that it had a “record-breaking” holiday weekend in terms of sales. Without giving specific sales data, Amazon said Cyber Monday marked the biggest shopping day in its history, noting that shoppers bought more than 18mn toys and more than 13mn fashion items from Amazon on Black Friday and Cyber Monday combined. Internet Retailer estimates that Amazon will account for 29% of US sales during the five days spanning Thanksgiving through Cyber Monday.

Salesforce.com found that 54% of all digital orders on Thanksgiving Day were made from a mobile device – up from 47% a year ago. In addition, 68% of all digital traffic came from mobile devices, according to Salesforce.com. Workarea Commerce Platform noted on Monday that, across the 700-plus e-commerce websites that use its e-commerce platform service, mobile’s share of revenue of consumers shopping via mobile rose 6% YoY on Thanksgiving Day. In addition, mobile’s share of traffic dominated once again driving 61% of total traffic – up 5% YoY. Sales from consumers shopping on desktops fell to 49% of total revenue, a drop of c. 5% compared with Thanksgiving 2017.

While the past few shopping days were extremely profitable for retailers not everything ran 100% smoothly – when Walmart’s Black Friday deals went live shoppers complained about slow-loading pages and then reported error messages. It’s unclear how this impacted Walmart.com’s overall sales, but downtime engineering software company, Gremlin.com calculateds that Walmart.com generates $679.52/ second and $2.45mn in online sales per hour based on its estimated annual e-commerce revenue, so every moment the website is down is critical for the retailer. Leading up to this past US holiday weekend, Walmart saw positive gains as well. Walmart.com, excluding Jet.com, and Target Corp. performed more strongly headed into Thanksgiving, posting higher YoY online sales gains than Amazon, albeit off a smaller base, according to a report from e-commerce research company Edison Trends.

Over the weekend, The Wall Street Journal wrote that foot traffic at brick-and-mortar retailers declined for a fifth straight year, although the drop wasn’t as sharp as it has been in the past few years. Nevertheless, Pymnts.com writes that this decline comes despite the US economy being strong and writes that “consumers are buying more than they have in years … just not at the physical store in the way they once did.” According to a Pymnts survey of an average week, 83%-plus of consumers go to stores to buy items that they have used their smartphones to look for first. Only 16.5% of US consumers use the physical store exclusively to check what they want to buy (a decade ago that number was at around a 100%). So, stores are increasingly becoming places “where consumers walk in knowing what they want to buy, and how much they will pay — or pick up what has already purchased and paid for online.” The survey also found that c. 59% of consumers making purchases using smartphones are women. The only channel to beat mobile was desktop computers, at 65%, while shopping in a physical store ranked a distant third at 56%. Pymnts.com writes that all of this points to the “physical retail ship … still sinking” as busy consumers “place a premium on the value of their time and view mobile and other connected devices as efficient enablers of their purchases regardless of where they happen to be … “. 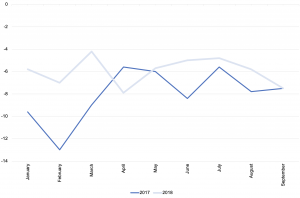 The National Retail Federation forecasts that total US holiday retail sales in November and December will increase by between 4.3% and 4.8% YoY to a total of between $717.45bn and $720.89bn. That compares with an average annual increase of 3.9% over the past five years.

The key takeaways from the vigorous growth at the start of the US holiday shopping season seems to be that retailers (especially online) are getting a significant lift from a robust US economy, the (various) convenient new ways to shop and spend, and the demise of former rivals (for example, Toys R Us). This year’s US holiday shopping season already looks brighter than ever for retail players and besides Amazon, traffic at Walmart, Target, Best Buy, and Kohl’s was strong on Black Friday and into the weekend, according to analysts.