The company showed increased losses in its streaming segment due to its investments in streaming services Hulu, ESPN+ and Disney+, while lower attendance led to reduced profit at domestic parks. Disney attributed its earnings miss to the integration of 21st Century Fox’s (Fox’s) entertainment assets, which it acquired in a $71bn deal that closed in March. We note though that these results are very ‘noisy’, as Disney is now knee-deep in the integration process with Fox and Hulu. The disappointment is mostly around the unexpectedly high dilutive impact of the acquisition for the quarter ($0.60 vs guidance of $0.35). However, we view this as a transient issue that investors need to look through. The integration process is going to impact earnings adversely for the next two years, but importantly management are still guiding to earnings accretion in FY21.

If one excludes the restructuring and non-cash costs related to the Fox transaction, Disney’s operating results were still softer YoY – with total adjusted operating income down 5% QoQ and 8% YoY for the YTD. This is largely attributable to a lower-than-expected performance from Fox’s film studio unit and Star (the India-based TV network and sportscaster acquired as part of the 21CF transaction). 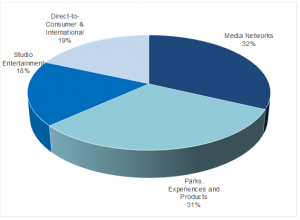 Media networks (32% of revenue [+21% YoY]): Disney’s largest division (which houses ESPN) saw revenue advance 21% YoY to $6.7bn for the quarter, while operating income rose to $2.1bn. Cable Networks’ revenues jumped 24% YoY to $4.5bn, buoying results here, while operating income increased 15% YoY to $1.6bn. The company said the higher operating income was due to the consolidation of Fox channels as well as higher advertising revenues at ESPN. It also noted increased programming and production costs (due to contractual rate increases for sporting events – MLB and NBA) and “new rights for boxing and mixed martial arts.” Disney incurred restructuring charges of $207mn related to the Fox acquisition following its first full quarter of ownership.

Parks, Experiences and Products (31% of revenue [+7% YoY]): Parks and Resorts, Disney’s second-biggest segment, recorded quarterly revenue of $6.6bn (+7% YoY) but operating income of $1.7bn advanced only 4% YoY. Profit at Disney’s domestic resorts slumped as the opening of its highly anticipated, Star Wars: Galaxy’s Edge, the largest addition ever to Disneyland in California, disappointed, weighing on results.

Studio Entertainment (18% of revenue [+33% YoY]): The Studio Entertainment business reported $3.8bn (+33% YoY) in revenue and $792mn (+13% YoY) in quarterly operating income. Disney’s movie studio continues to churn out blockbusters with Avengers: Endgame becoming the highest-grossing film of all time with a $2.79bn global box office take. Endgame’s success together with other Disney titles (Captain Marvel, The Lion King, Toy Story 4 etc.) could see Disney earn $9bn-plus at the global box office. However, Dark Phoenix, a Marvel movie it inherited in the acquisition of Fox assets, negatively impacted this segment as Disney took a write-off on the film.

Direct-to-Consumer & International (19% of revenue [+367% YoY]): The direct-to-consumer segment recorded revenue of $3.86bn, with operating losses increasing to $553mn vs $168mn in 3Q18 due to what Disney said was increased losses on Hulu and bigger investments in ESPN+ and Disney+ streaming services. Disney+ will launch on 12 November (in the US and 2 international markets) at a cost of $6.99/month, or $69.99/ p.a. and will feature content from Disney, Pixar, Marvel, Star Wars, and more. CEO Bob Iger said on the earnings call that Disney will offer US consumers a bundle of Disney+, ESPN+ and an ad-supported Hulu subscription for $12.99/month (the same price as Netflix’s standard subscription plan).

Looking through the integration process, this is a business that should earn $7 to $8/share. At $136/share, that puts Disney on a “normalised” P/E of 17x–19.5x. Historically speaking, that is about right for Disney (see Figure 4 below) – and the point to make here is that the EASY money has been made. Disney was simply too cheap when the market was extrapolating the subscriber attrition in the ESPN business due to the adoption of competing streaming services, but this is no longer the case. 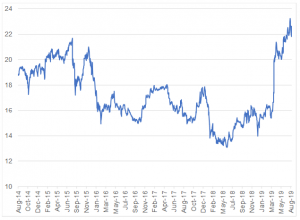 Looking ahead, there is a case to be made that the rating differential between Netflix and Disney needs to close (see Figure 5 below). Netflix needs to burn an increasingly large amount of cash each year to produce fresh content to retain and to attract subscribers, whereas Disney has the wonderful ability to milk a fairly “timeless” library of content on several fronts (movies, TV series, theme parks, merchandise etc.), while remaining cash generative. We believe that most of the gap will close through a derating of Netflix, but we also suspect that the market will start to attribute a higher multiple to Disney’s Direct-To-Consumer & International business if adoption rates look positive once the streaming service (Disney+) launches.

The first sight of subscriber numbers we’ll have will be at the end of January 2020 in the 1Q20 results. We are happy to stay structurally long Disney, as we believe investors are paying a fair price for the group’s businesses in their current form – without paying a premium for the value that will be extracted from the Fox assets or for the very promising, but early stage, Direct-To-Consumer business. 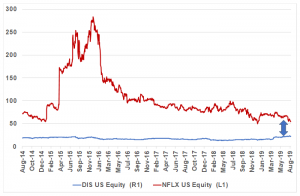