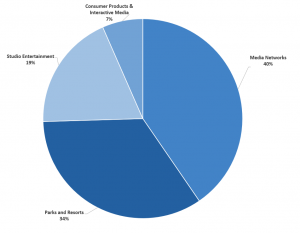 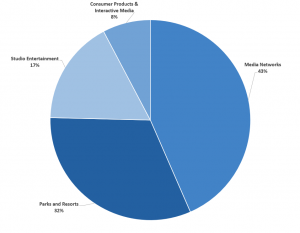 Media networks (40% of revenue [+4.9% YoY]; 43% of operating income [-1.1% YoY]): Disney’s largest division (which houses ESPN) saw revenue advance by 4.9% YoY to $6.2bn for the quarter, while operating income dropped 1.1% YoY to $1.8bn. The number of cable subscribers declined (although it is important to note that it was at a slower pace than previous quarters – Reuters writes that declines have moderated in each of the last four quarters) as viewers continued to move to online sources, putting pressure on its advertising volumes. Disney didn’t reveal much in terms of hard data following its first full quarter of the ESPN+ streaming platform but did say that trial conversion rates are strong, and subscription growth is tracking ahead of the company’s targets. Disney’s direct-to-consumer (DTC) streaming platform launch is still set for late 2019.

Parks and Resorts (34% of revenue [+6.1% YoY]; 32% of operating income [+14.6% YoY]): Parks and Resorts, its second-biggest segment, recorded quarterly revenue of $5.2bn (+6.1% YoY) but operating income of $1.3bn spiked 14.6% YoY as attendance, price increases and guest spending rose at both its domestic and international parks. The firm indicated that this profit spike would have been bigger if it weren’t for a shift in the timing of the Easter holiday period and a temporary drop in hotel occupancy tied to room refurbishments.

Consumer and interactive (7% of revenue [-7.7% YoY]; 8% of operating income [-10.5% YoY] – Consumer and interactive, its smallest business, posted $1.0bn in revenue – down 7.7% YoY, while operating income here dropped by 10.5% YoY to $324mn. Results were lower as gains in products related to The Avengers weren’t enough to offset lower revenue from Spider-Man and Cars.

Meanwhile, Disney also said on the conference call that while it indicated at the time of the announcement of its revised offer for Fox, that it could happen by the end of FY21 or FY22 depending on the outcome of the Fox-Sky transaction, the “ultimate timetable will depend on whether Fox acquires full ownership of Sky, as well as the amount of proceeds from the RSN disposition.”

While Disney’s 3Q18 results fell short of consensus expectations, we maintain that near-term earnings volatility has little bearing on the value inherent in Disney’s assets – which we believe the market is currently mispricing. Now trading on a forward P/E of just 15x, Disney presents a compelling opportunity for investors to gain exposure to one of the world’s truly timeless businesses and brands at a material discount to fair value.

The primary catalyst, in our view, will be Disney’s disclosure of a positive rate of adoption of its forthcoming digital streaming services (ESPN+ and Disney’s house-brand streaming service). This should change the common misconception that ESPN is a sunset business, and will likely result in a rerating of the share as the unit is valued as a growth asset again.

The secondary catalyst, as is the case in so many instances of large-scale M&A, will be balance sheet deleveraging. The pro-forma balance sheet leverage of 3.5x net debt: EBITDA, resultant from the Disney-Fox transaction, is likely weighing on the share’s rating – however we expect rapid deleveraging over the next 24 months to buoy the stock’s valuation.