The US election results: How things currently stand

With counting close to complete, most commentators have “called” the Presidential Election in Joe Biden’s favour (i.e. their models suggest that Biden has enough of a lead in states representing more than 270 electoral votes that the result is beyond doubt).

Alaska, Georgia, and North Carolina’s results are yet to be called but, having built up a strong enough lead in other states, Biden could lose all 3 of those states and still win the Presidency.

Five of the states (Michigan, Pennsylvania, Wisconsin, Arizona, Georgia) that helped incumbent Donald Trump win the presidency in 2016 look to have switched sides The biggest shocks were in Arizona and Georgia, which have been won by the Republicans in at least the past five elections 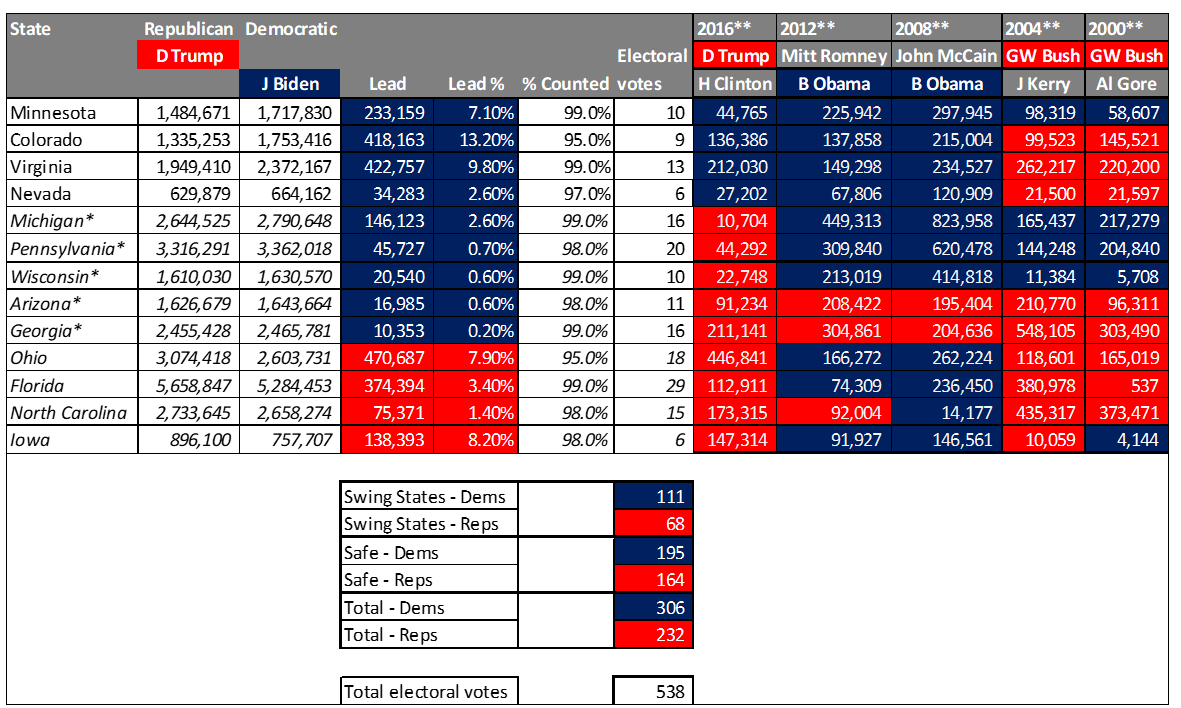 Republicans entered these elections with 53 of the 100 Senate seats.

It seems likely that Republicans will end up with at least 50 seats after these elections. However, we will have to wait until 5 January 2021 to find out who will control the Senate, since Georgia requires its Senators to win more than 50% of the vote, which likely has not happened in the case of both Senate seats being contested in Georgia. So, the top two candidates will go up against each other on 5 January with voters deciding on a final winner. Both incumbents are Republicans, and it seems like there is a decent chance that Republicans will win at least one of the seats required to give them a slim majority in the Senate. Given how important those votes have now become it is likely that there will be some fairly intense campaigning by both sides over the next couple of months.

Assuming that the Presidency goes to Biden, if Democrats win both the Georgia Senate seats, leaving the Republicans and Democrats with 50 seats each, the vice president, Kamala Harris, will get to cast the deciding vote when the two sides remain deadlocked, leaning the Senate in favour of the Democrats.

Votes in some states are still being counted and the results are never official until final certification, which occurs in each state in the weeks following the election.

Once results are declared by the states, 538 chosen officials (electors) meet in their state capitals to vote on 14 December.

The new president is officially sworn into office on 20 January after a transition period to give them time to appoint cabinet ministers and make plans. The handover of power takes place at a ceremony known as the inauguration, which is held on the steps of the Capitol building in Washington DC.

What could still change?

Donald Trump has launched legal challenges in several states and many other states will be subject to recounts including:

It is likely that a cloud will hang over the results for a couple of more weeks until the legal challenges and recounts are finalised, but with the extent of Biden’s win it seems a low probability that the result will be overturned.

What policies could change?

Biden has updated his website (www.buildbackbetter.com) with his immediate priorities which include:

The president tends to have autonomy over foreign policy and so things he can do largely unilaterally include:

Many of Biden’s other policy hopes hinge on his ability to get Congress to approve changes and this will be incrementally harder in an environment where Republicans control the Senate. Policies that may be tough to implement without Republican support in the Senate include:

Things that may get support from a Republican-controlled Senate: 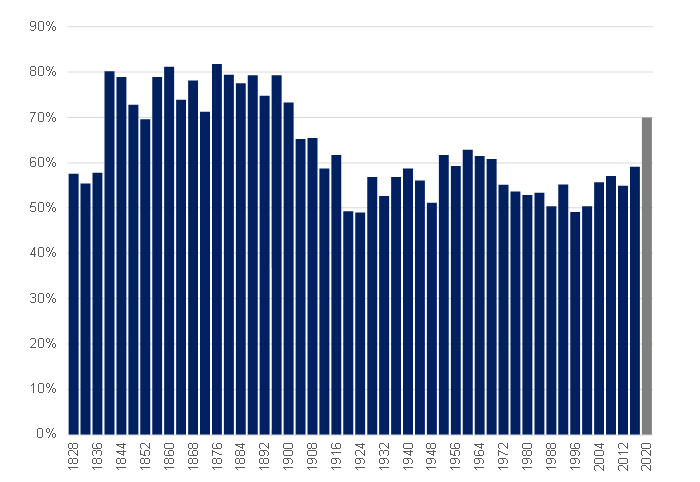 How have the markets reacted?

From the close of business on the day of the elections (Tuesday, 3 November) until the end of last week (Friday, 6 November), most equity markets were up strongly almost regardless of who was ahead in the count. Emerging markets (EMs) generally fared slightly better than developed markets (DMs). 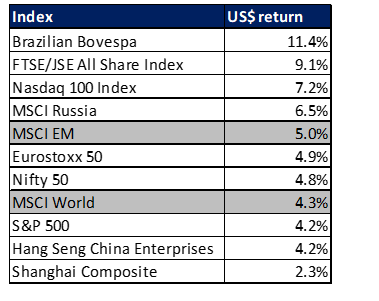 The bullishness seems to have extended into this week. Despite the prospect of a rotation out of highly rated tech stocks, the tech-heavy Nasdaq 100 has handsomely outperformed broader US equity markets.

Since the election, the US dollar has also generally been weaker against most currencies – once again EMs seem to have been the biggest beneficiaries.

Figure 5: Global currencies performance vs the US dollar, 3 to 9 November 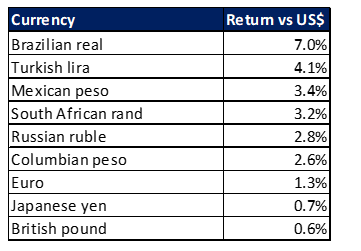 Many of the policies which are likely to have had the biggest impact on stock markets, such as the raising of US corporate taxes, now appear less likely with the Senate election seemingly leaning towards Republican control and US 10-year government bond yields are marginally lower (currently 0.8%) since the election, perhaps as the prospect of an excessively large fiscal stimulus package fades in light of a Republican-controlled Senate.