The case for gold

In this note, we look at the arguments for, and against, holding gold shares in an investor portfolio. We also look back at how the current global financial system came to be and how the Bretton Woods system, which lasted from 1944 to 1971, came to an end when ex-US President Richard Nixon abolished the gold standard and gave the US Federal Reserve (Fed) a greater influence in economic policy. While this is by no means our base-case investment scenario, there are arguments to be made for holding gold counters, especially in the current market environment, where gold mining shares account for a significant weighting in the FTSE JSE All Share Index (ALSI).

Figure 1: Gold mining companies as percentage of the FTSE JSE All Share Index* 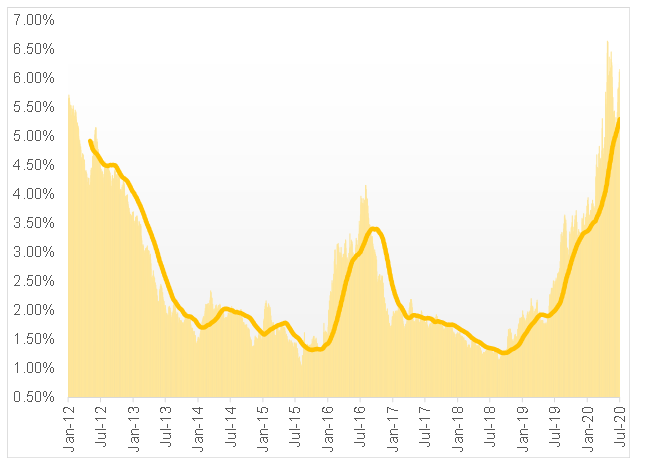 Gold is a store of value

By referring to gold, and other precious metals, as a store of value it means it is something which can be saved, retrieved and exchanged at a time in the future – it maintains its future purchasing power, since its so-called shelf live is basically perpetual. In the past, before the rise of the fiat currency system, all currencies were linked in some way to the value of gold.

An investor cannot derive cash flows or cost savings from physical gold holdings. Gold is thus, at best, a currency. In this regard, our investment view is that long-term portfolios should invest in assets that can compound earnings. However, the theoretical quality of gold as a good store of value can add worth to a more tactical portfolio when there are concerns of a market correction.

Figure 2: The power of compounding 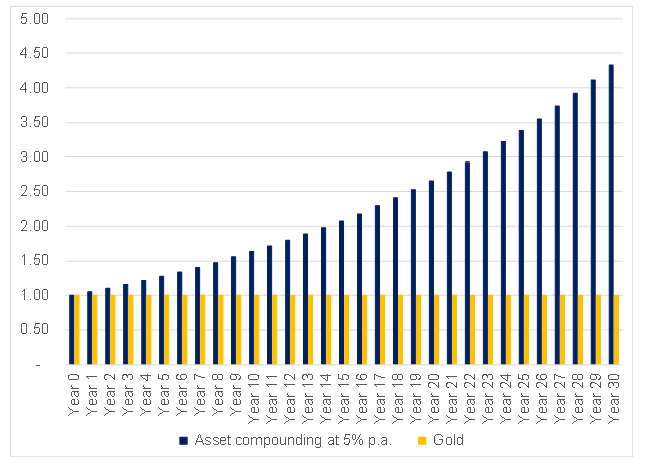 The reasons to own gold

Below, we look at the reasons to own gold by discussing the following points:

Initially all currencies were backed, in some way, by gold. This form of monetary policy was known as the gold standard and was in use in the nineteenth and the early twentieth centuries. However, World War I and World War II made it increasingly difficult for countries in Europe to balance their fiscal demands with gold standard obligations. To assist these European countries a new monetary agreement was reached – the 1944 Bretton Woods system of monetary management, a negotiated system intended to govern monetary relations between countries. The main feature of the Bretton Woods system was that it allowed countries to “fix” or “peg” their currency to the US dollar and this exchange could be adjusted by governments as needed to make a country’s currency more competitive. The US dollar was, in turn, pegged to the gold price at $35/oz.

In 1971, however, the so-called Nixon Shock and the rise of fiat currencies changed gold’s position in the world. Since the onset of Bretton Woods, the US started running massive trade deficits, printing money to fund the Korean and Vietnam wars. At the same time, European economies were guilty of excessively depreciating their currencies, thus making the US uncompetitive. This resulted in many European countries (especially France) starting to distrust the US dollar (and by implication the US government) and demanding gold in exchange for their currency. This placed significant strain on the US fiscus and, in August 1971, Nixon (without consulting the IMF, other countries or even his own government) announced a 90-day freeze on wages and prices and no physical exchange of US dollar to gold.

This 90-day period, which kicked off the world’s move into a new monetary regime of fiat currencies, continues to this day. Fiat currencies are basically government issued currency, which is not backed by, for example, a commodity such as gold. It gives central banks a greater control over a country’s economy since central banks can now control how much money is in circulation at any time. Most modern paper currencies are fiat currencies (the US dollar, British pound etc.).

In 2008, the global financial crisis (GFC) hit and the reaction of the Fed was to embark on a policy of quantitative easing (QE). The Fed chairman at the time, Ben Bernanke, promised that QE would be rolled back once the economy was strong enough. However, this never truly materialised under Bernanke, although his successor Janet Yellen did start to reduce liquidity during her term.

Fast forward to 2020 and COVID-19 with its subsequent lockdowns, and the Fed is forced to reverse the trend of reducing liquidity in the financial system, resulting in the world now being in unchartered monetary policy territory. 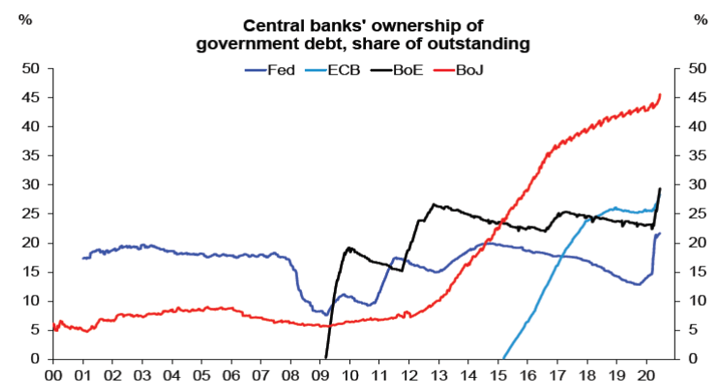 The principles used during QE borrow significantly from Modern Monetary Theory (MMT). MMT is a drastic departure from conventional economic theory as it proposes that, since governments control their own currencies they can spend freely as they will always have more money to pay off debt in their own currency. So, the issuance or creation of a domestic currency is a public monopoly and thus the government does not have to fund expenses from taxes or debt but can just print money because the deficit of the fiscus is the surplus of the economy. MMT proposes that government spending and taxes, rather than interest rates, be used to manage inflation and the unemployment rate. According to proponents of MMT, Japan, with its high debt to GDP ratio, and the US, with its perennial current account deficit, are examples that show Keynesian economics do not apply to governments.

A major criticism of MMT is that, although the theory provides a lot of detail on how the finances of the government must be managed, it lacks detail on how private capital can be linked into this system. MMT gives governments the ability to provide the economy with an infinite amount of capital, but the scarcity of capital is a key pillar of capitalism. This means that only the best opportunities receive capital and these opportunities also only receive an optimal amount of capital before the next best opportunity is considered. This principle of scarcity of capital allows capitalism to let the best opportunities flourish without getting lazy and, simultaneously, weeding out bad opportunities. Over the past decade, since the onset of QE, we have however witnessed the disturbing rise of “zombie” companies – companies that have debt servicing costs higher than their profits – in the US. We have also witnessed the overallocation of capital to good ideas. The best example of this, in our view, is Tesla. Although Tesla’s cars are fantastic vehicles and we believe that the company may have great growth prospects in the future, it is difficult to justify that it currently has the biggest market capitalisation of all global vehicle manufacturers when it has a global vehicle market share of less than 1%.

Figure 4: The rising share of US firms with debt servicing costs higher than profits (US share of “zombie” firms)

Figure 5: The market caps of various companies in US dollar 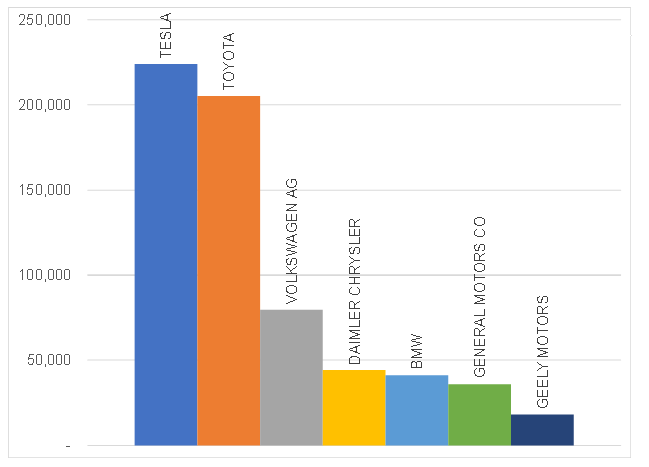 The hedge against inflation

Over the past two decades the inflation rate has been kept under control remarkably well. This was during a period of material global GDP growth and unprecedented low interest rates, two factors that in combination usually lead to higher inflation. Globalisation has been a key driver of keeping inflation rates low since the early 2000s as corporations managed to reduce the production cost of products by manufacturing said products in the most cost-effective regions.

Note that the estimates correspond to export-to-GDP ratios

However, two key events over the past few years could disrupt this:

The rise of Trumponomics forced many corporations to reconsider their usual supply chain decision process. In the past, companies would build factories in those countries where they could manufacture a product at the lowest price, whether due to availability of certain commodities, cheap labour, low transport costs, attractive tax incentives etc. Now, with global politics and the resultant trade deals being far less secure than historically, corporates are looking to bring production closer to home, where changes in global politics will have a less significant impact on the manufacturing process.

It is difficult to imagine that companies will be willing to absorb the higher manufacturing costs as they start to re-align their supply chains to the new reality. This shift could result in cost-push inflation or inflation caused by substantial increases in the cost of imported goods or services and where no suitable alternative is available. Figure 7 below highlights the risk of cost-push inflation as the more developed economies have far greater minimum wage requirements than their emerging market (EM) peers.

Figure 7: Minimum wage in US dollar, based on 2 June 2020 exchange rates 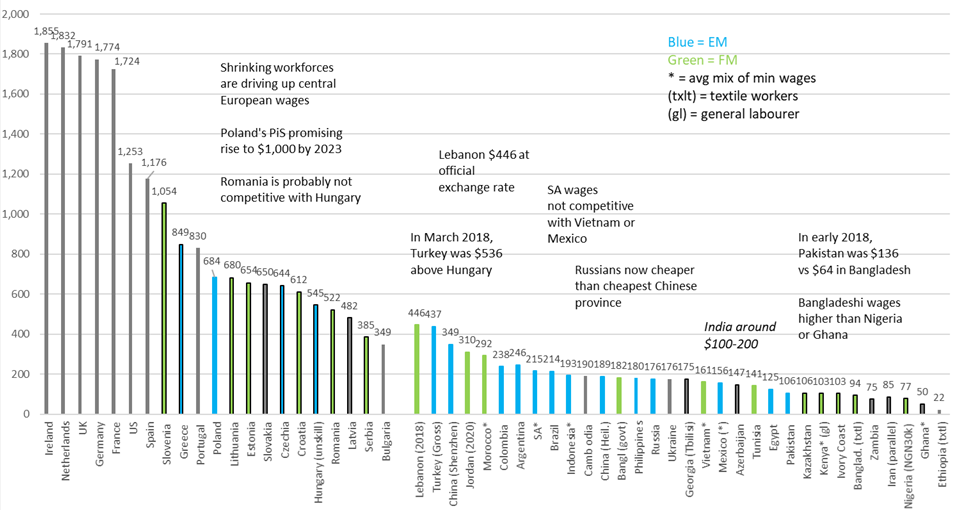 Note data on RHS may be a mix of gross or net wages.

Figure 8: US – velocity is positively correlated with inflation 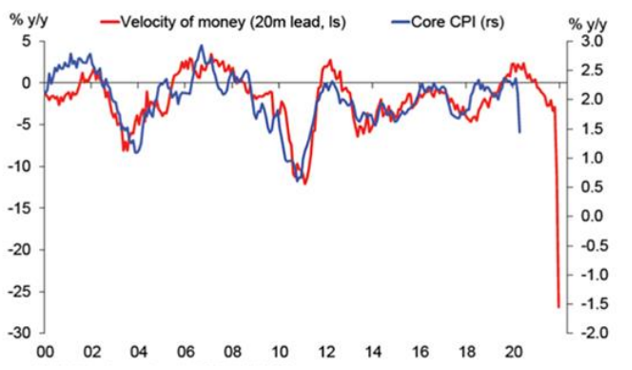 Note velocity of money is nominal GDP divided by M2.

A hedge against market correction

The most recent rallies in global markets has many market experts baffled. Never has the market felt as dislocated from economic reality. It is difficult to justify the valuations of equity markets at present. Even in the event of a so-called V-shaped economic recovery companies will still have to grow into their current valuations. A correction in equity markets from these stretched valuation levels will not be surprising.

Gold tends to be a very good hedge against market corrections. As can be seen in Figure 11, during years where the S&P returned negative performance, gold managed to outperform. It is this characteristic of gold that makes it so attractive in the current environment. 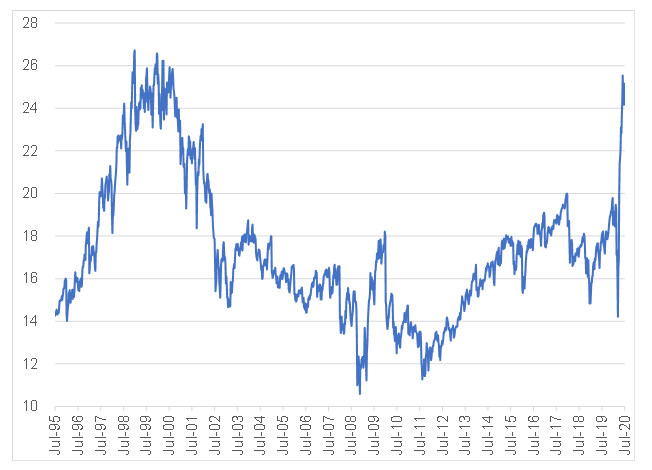 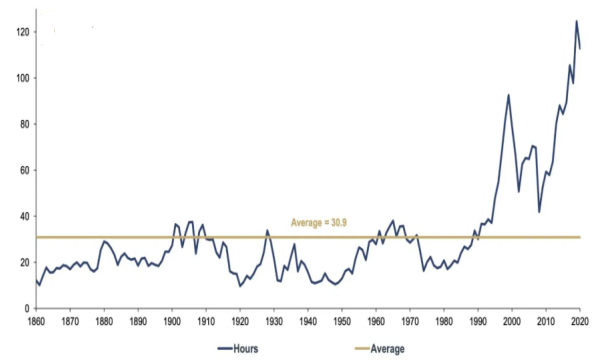 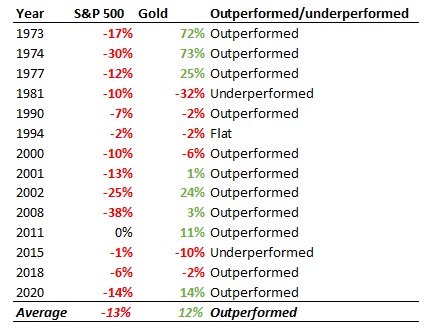 Gold as a safe haven

During times of market turmoil, defensive investments, such as gold, are seen as safe-haven investments. The gold price usually moves in the opposite direction to the US dollar. As the COVID-19 epidemic spread globally in March, risk averse investors initially pulled their money from EMs and into cash. However, when the Fed lowered rates to zero there was less incentive to hold cash (dollars), while already low returns from US government bonds and debt were pushed even lower. This, together with continued uncertainties around the COVID-19 pandemic clouding the global economy, buoyed gold’s appeal as a safe-haven investment resulting in the gold price recording another great run in June 2020 (up 2.9% MoM, after May’s 2.6% rise) and topping $1,800/oz– its highest finish since 2011. This saw gold miners on the JSE rally c. 20% for the month.

It is also important to note, that the gold price has reached all-time highs in all major currencies other than the US dollar. This, we believe, is because international investors regard gold and the US dollar as the best safe-haven assets in the current economic climate. Given the concerns we have raised regarding the current policy action by the Fed, we expect that gold may reach new all-time highs in US dollar terms in the not too distant future.

Figure 12: Gold price movements in various currencies, rebased to 100 from its previous all-time high in September 2011 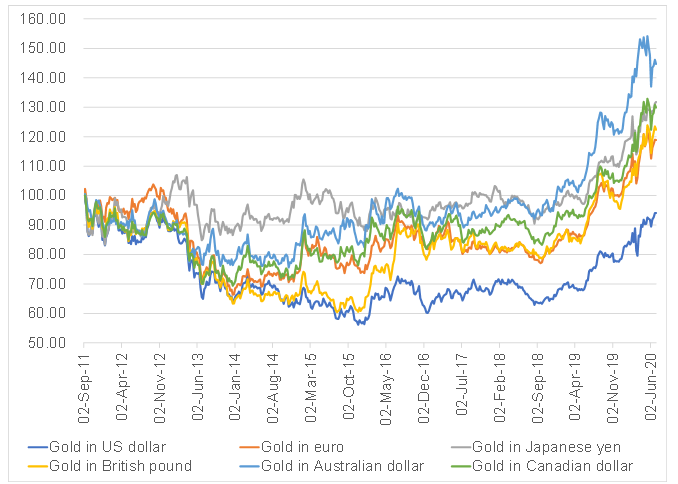 We would like to re-emphasise our view that we, like many other long-term investors, do not view gold or gold miners as good long-term investments. Any investor that is willing to hold on through the up-and-down cycles of the market will be far better rewarded to invest in high-quality companies that can compound their earnings over an extended period.

But gold and gold miners can play a valuable role in a tactical portfolio that wishes to hedge against market corrections. We believe that the current economic environment is almost ideal for gold, and tactical investors should look to add some gold exposure to their portfolio. This is to protect against an overextended global market and to benefit from a potential rally in the gold price due to current economic and monetary forces.