Some thoughts on Tencent, Naspers, and Prosus

It has been a particularly strong start to the year for this grouping of shares – Naspers is up 21.1%, Prosus has risen by c. 17% and Tencent has jumped c. 29%, YTD (to 25 January 2021). Tencent’s 12-month forward PE is now 47x. Figure 1 below provides a sense of how Tencent’s current rating compares with its own history going back to January 2010. Keep in mind that, over the past 5 years, the value of Tencent’s portfolio of minority listed stakes (which do not contribute to its operating earnings) has gone from being immaterial to around 30% of Tencent’s total market cap, according to Investec. Unfortunately, the problem is that Tencent’s investment portfolio’s value can deflate just as fast as it has inflated, so this argument that the current rating is not as demanding relative to history as it appears at face value must be approached with caution. 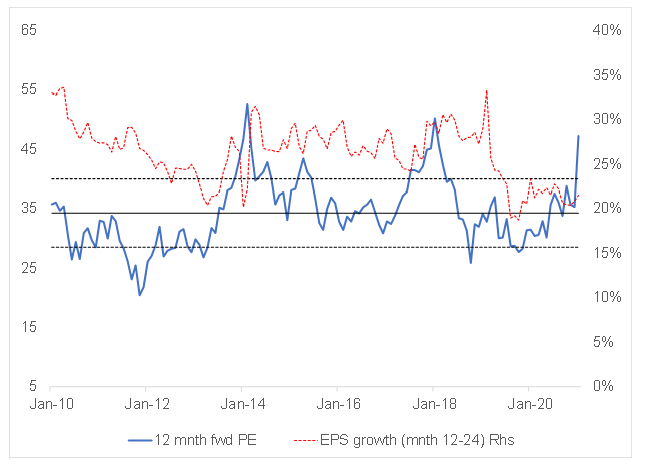 Figure 2: Listed associates as a percentage of Tencent’s market cap 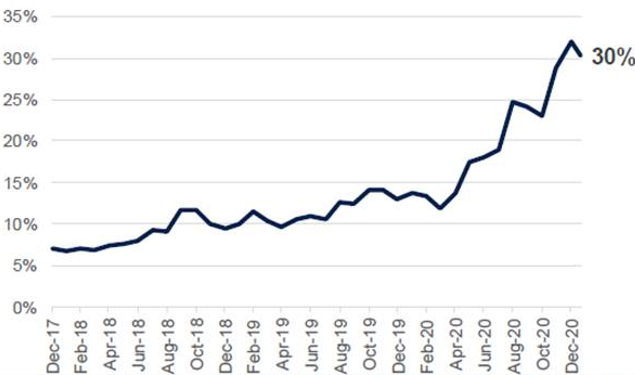 As for the discounts to net asset value (NAV), we calculate these as being 54% for Naspers and 36.5% for Prosus. With reference to Figure 3 below, we also highlight that the discounts have been widening appreciably during Tencent’s recent share price rally (Tencent’s share price jumped by c. 11% on 25 January alone). That Naspers and Prosus’ discounts to NAV widen when Tencent’s share price is rallying strongly is consistent with what we have seen historically – one likely reason for this is that institutional investors who must remain within single stock exposure limits will be forced sellers of Naspers during this type of rally. 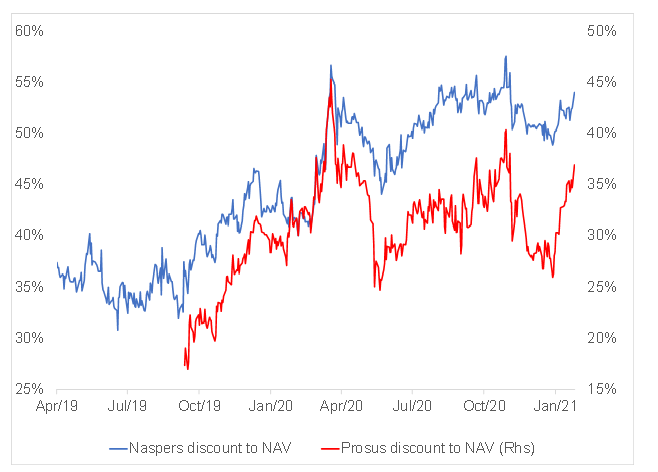 As for the relative performance between Naspers and Prosus, investors have seen the gap between their discounts narrow quite a bit recently (see Figure 4 below), which in this case means that Naspers has been outperforming Prosus. This may relate to investors anticipating that the next value unlock transaction in this Group will happen at the Naspers level – something for which we have been arguing for some time.

Figure 4: The gap between Naspers and Prosus’ respective discounts to NAV 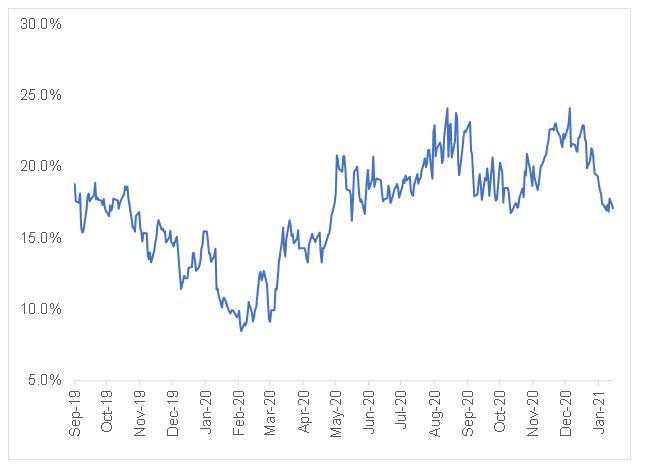 So, what should investors to do now? We believe that Tencent’s share price is currently looking stretched. Of course, stretched valuations in the underlying portfolio of investments could persist for a while. However, into this strength, we think it would be wise to take some exposure off the table. Remember that antitrust regulations remain a big uncertainty in China. While Tencent makes a good point that these proposed regulations are likely to be directed more at China’s e-commerce players, the share’s current valuation is certainly not tolerant of any negative surprises when this is finalised.

As for Prosus and Naspers, we would argue that it makes sense to trim exposure to Prosus in particular, especially given that it is not obvious what corporate action there could be in the future to narrow the discount. However, Naspers remains a tougher call as we still believe that the significant next step to close this discount (possibly a reduction in its Prosus stake from 72% to 50% by way of another distribution of Prosus shares) could happen at any time. Corporate action aside, if we see a pullback in Tencent, while the relatively elevated levels of the discounts at the Prosus/Naspers-level might provide investors with some protection, we will still expect both to pull back in absolute terms. 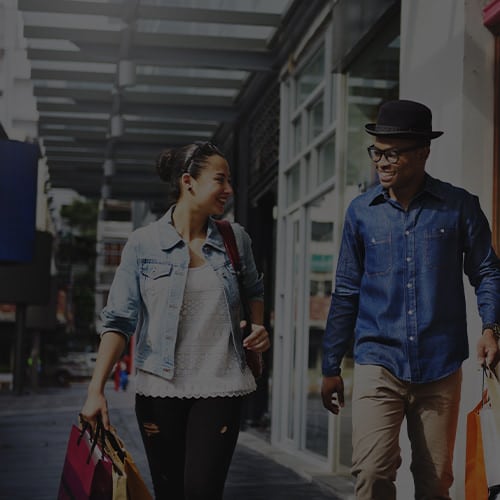