After the sell-off in technology (tech) shares in recent months, investors are debating whether the sector is investable or not. We believe that it would be a mistake to avoid the sector as a whole. These types of sell-offs typically create excellent buying opportunities in individual stocks and the current pullback is unlikely to be any different in this regard.

At some point in our investing journeys, we have probably all declared a sector to be unsuitable for investment. For reasons that include high valuations, a poor secular outlook for that industry, or unusually large regulatory risks. There are undoubtably points in time where simply avoiding a sector would have served our overall performance very well even if just for a short while. Avoiding the high revenue growth, no earnings software sector from 2H21 seems like a smart call with hindsight (and maybe even to some at the time).

Currently, tech is the biggest sector by market capitalisation in the US, accounting for 27% of the S&P 500 Index. It is a large sector that offers a wide range of investment opportunities.

The tech sector’s weighting in the S&P 500 Index has steadily increased over the past 20 years but remains below the peaks achieved at the height of the 2000 tech bubble. The current increase has seen a steady climb over many years compared with the sharp, sudden increases of the late 1990s. This points to a longer-term secular trend compared to the tech bubble of the late 1990s. 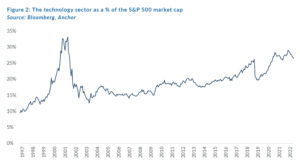 The S&P 500 Information Technology sector’s P/E multiple has retraced sharply but it is not yet in long-term, deep value territory. 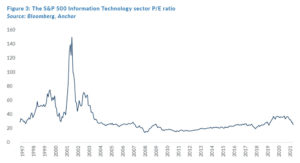 The sharp sell-off of 2022 has seen the price/sales (P/S) multiple of the S&P 500 Information Technology sector retrace sharply but it is not yet in value territory for the sector as a whole. The P/S multiple has some severe shortcomings as a valuation metric. However, it can be useful in the tech sector given the tendency of higher-growth companies to deliberately reinvest a large proportion of current profits into driving future revenue growth. 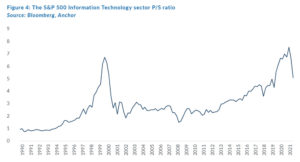 Sometimes, what we classify as a tech company is a traditional business that is using modern technology to enhance the way it serves its customers. Surely this is what most/all companies should be doing? If an older traditional company embraces technology to improve its service, does it then become a tech company to be avoided? Even though this newer approach might be enhancing its investor returns.

There is no doubt that the successful application of modern technology is enabling companies to scale much faster than in previous eras of slowly grinding out an expansion in brick-and-mortar businesses.

The increasingly wide definition of what constitutes a tech company is likely contributing to the steady rise of tech as a percentage of the overall market. Many businesses that are now classified as tech companies would have been classified as something else in a bygone era. It is worth noting that some of the companies that are commonly referred to as Big Tech (such as Alphabet and Amazon), are not actually included in the S&P 500 Information Technology Index.

Previously, tech spending was considered a cost centre for many large corporations. Increasingly, it is considered mission-critical spending to enhance business efficiencies and therefore, profits. In the face of slowing global economic growth, no sector is truly immune to this slowdown. However, large parts of corporate tech spending could still prove very resilient. A mission-critical sector such as cybersecurity is a good example of this.

Ironically, over the years, some have suggested avoiding consumer electronics businesses as they make for poor investments. Well, maybe not in the case of Apple if they make truly world-class products. These top-down views can lead to poor investment outcomes. Rather assess each company on a case-by-case basis.

Some tech companies have shown a remarkable ability to grow into what seemed like stretched valuations at the time. This is not without risks as equity markets have recognised the ability of technology to scale a business faster than was the case previously and valued many of them accordingly. It does, however, leave investors vulnerable if the high-growth investment thesis does not pan out.

Several successful private investors have observed that some of their most rewarding long-term “tech” investments, were in companies that were universally decried as being “too expensive” at the time of investment. The so-called FAANGMs (Meta [formerly known as Facebook], Amazon, Apple, Netflix, Alphabet [formerly known as Google], and Microsoft) were avoided by many value-based investors for years as being too expensive, thereby completely missing these market-beating returns. Every day is a new day in markets and maybe the time will come when the FAANGMs do become too expensive relative to their prospects.

Ultimately, the truth to investing lies in a bottom-up, case-by-case analysis. Accurate bottom-up analysis should lead you to the correct top-down view rather than the other way around. Undoubtedly, there will be some pandemic winners that lack a sustainable business model in a more normalised world. These companies will continue to fade away.

Possibly there will be fewer tech failures than was the case in 2000. Many of the 2000 failures were in companies that had no real business model and were selling a future concept to the market. A lot of today’s tech companies seem to have more proven business models albeit their share prices were materially overvalued in 2021. Many current high revenue growth tech companies have taken an active decision to forgo current profits to scale their current business for the longer term. These companies have some scope to dial back on rapid revenue growth in exchange for higher current profits. Cutting back on large sales and marketing expense lines is one example of this.

Taking top-down decisions to avoid a particular sector can exclude the investor from potential opportunities to generate significant personal wealth. Given the increasingly wide definition of what constitutes a tech company, it seems a mistake to take a top-down view to avoid investment in these companies completely. The valuation pullback in recent months is likely to create some excellent buying opportunities in individual tech companies.