Sasol to sell 50% of its US LCCP business

Sasol announced today (2 October), that it will sell 50% of its US base chemicals business (the Lake Charles Chemical Project [LCCP]) to LyondellBasell, a multinational chemicals firm, for $2.0bn (c. R33bn). If the deal is approved by Sasol shareholders, LyondellBasell will own 50% of the LCCP base chemicals.

Sasol has been aiming to raise up to $6bn to pay-down debt and sort out its balance sheet. We estimate that this transaction, in addition to recent self-help measures and previously announced asset disposals, will generate about $5.1bn for Sasol (see first four rows in Figure 1 below). Today’s announcement also states that Sasol continues to work towards a rights issue in the first six months of calendar year 2021 (January-June 2021). The amount and the timing of the rights issue still has to be announced and will depend in part on the macro-environment and any other asset sales between now and then.

We estimate that Sasol could raise up to c. $900mn in a rights issue (equal to c. 19% of the Group’s current market cap), based on Figure 1 below. But we would caution that the company has given different messages on the rights issue previously so the actual figure may differ.

The net debt / EBITDA covenant may be used as a guide to how much capital Sasol intends to raise in a rights issue. 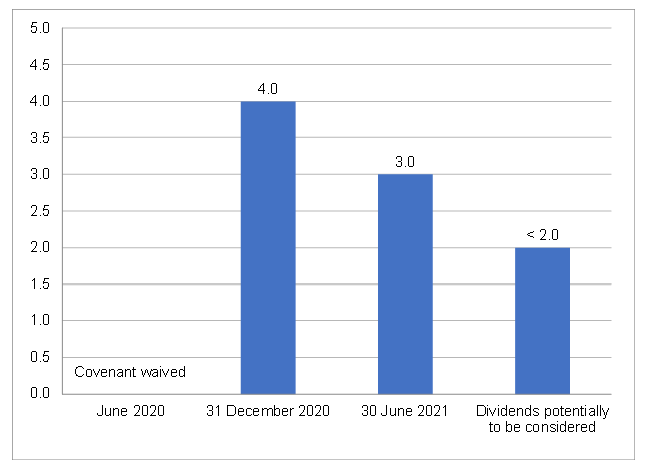 Sasol’s adjusted EBITDA stood at $3.4bn in FY19 and $2.2bn in FY20. Using the $2.4bn FY21 consensus analysts’ estimate, it does not appear to us as if a rights issue is needed if Sasol’s aim is purely to get net debt/EBITDA below 3.0x. Under that scenario, Sasol would need to raise $2.8bn to reduce its net debt from $10.0bn down to $7.2bn. The company has already raised $3.1bn from various self-help measures and previously announced asset disposals (excluding its US base chemicals business).

Sasol has also said that it will consider reintroducing a dividend once its net debt/EBITDA is less than 2.0x. Perhaps that is the leverage ratio that management has in mind and this moment is seen as a chance to fix the balance sheet once and for all. Under this scenario, if FY21 EBITDA is $2.4bn, Sasol would have to raise $5.2bn in capital. We note that the Group will have raised $5.1bn in capital from self-help measures and asset disposals.

We reiterate that, in our view, there does not seem to be a need for a major rights issue. We estimate $900mn for now as a working figure, but as Figures 3 and 4 above show, it could justifiably be much smaller than that amount.

We believe that Sasol’s earnings should improve materially in FY22 but will remain muted in FY21, unless there is a major improvement in oil and chemical prices (see Figure 5 ). 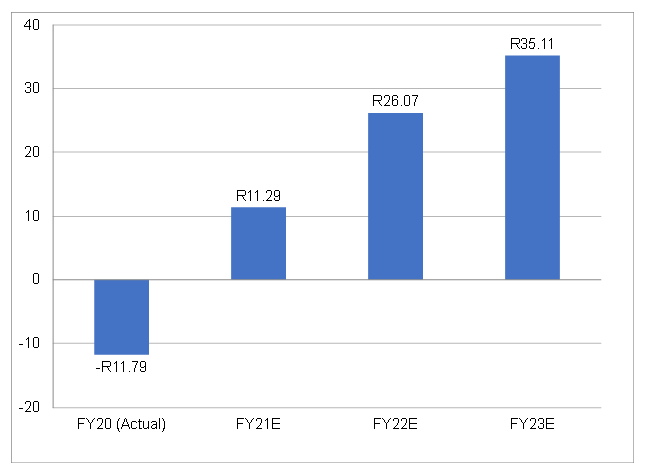 FY22 EPS of R26 would put the share on a 5x multiple to FY22. That is cheap vs history. However, the FY22 earnings number (if it comes to fruition) is several reporting periods away, with a decent amount of uncertainty between now and then. So, whilst acknowledging that the share looks cheap to FY22, we are also cogniscant of the risks and, in our view, the risk-reward equation warrants holding on to our Sasol position although we would not be further buyers of the share at present.