Sasol reports FY20 loss as it readies for a rights issue

On Tuesday (18 August), Sasol reported results for the year ended 30 June 2020 (FY20). As widely expected, FY20 earnings were poor, with Sasol posting a headline loss of c. R7.3bn, representing a significant drop from its FY19 profit of R18.9bn. Headline EPS fell from FY19’s already disappointing R30.72 to a FY20 loss of R11.79. Still, the poor earnings were expected and were not really the focus of these results, especially with a rights issue now being the base-case scenario for Sasol. The rights issue is expected to happen in 2H21 (i.e. the first six months of calendar year 2021).

Confirmation from the company that a rights issue is a given means either:

a) Sasol’s asset sale proceeds will be light, and a rights issue is therefore needed to get to its $4bn-$6bn capital raising target; or

b) asset sale proceeds, in addition to self-help measures, will get the company to its $4bn-$6bn capital raising target, but Sasol wants to use this as an opportunity to deleverage its balance sheet even further.

At this stage, it is hard to know which of the above two scenarios are true. However, we note that management also said that the current macro operating environment is better than they had expected (with the oil price at around R787/bbl vs management’s budget for a low R600/bbl oil price) and the rights issue has been delayed to 2H21 due, in part, to this reason.

In addition, the company said that a 50% partner for its US base chemicals operations will be announced within “weeks rather than months”. The size of the proceeds received for this is key to the size of the rights issue. In our view, $3bn for a 50% stake in the company’s US base chemicals operations would likely get Sasol to $6bn in capital raised and would, presumably, be received extremely positively by the market.

We expect Sasol’s earnings to improve materially in FY22, although it will likely remain muted in FY21 unless there is a major improvement in oil and chemicals prices. Although FY22’s earnings picture does look much improved, there remains significant uncertainty between now and then.

Whilst we acknowledge that selling half of its US base chemicals business at a decent valuation would likely be well received by the market, it is difficult for us to be overly bullish on Sasol when the thesis depends on mergers and acquisitions (M&A) into which we have no special insight. Still, some of our funds have exposure to Sasol and while we highlight that, at current share price levels, short-term risks remain we also note that there is some optionality available at current price levels over the medium term. So, while cogniscant of the risks, we believe that the risk-reward equation warrants holding on to our Sasol position at present. 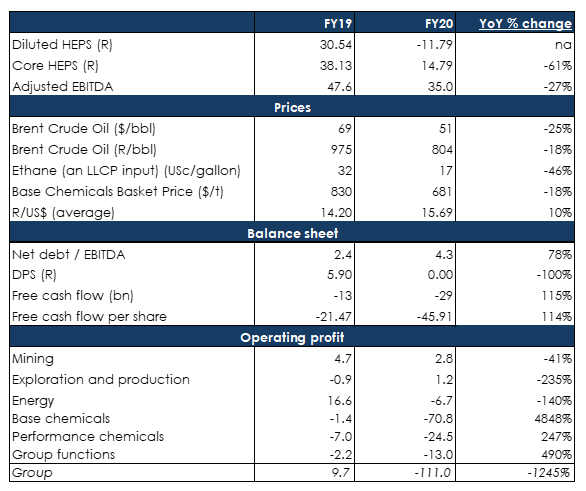 What is wrong with Sasol’s balance sheet?

Looking at Sasol’s balance sheet, we highlight the following issues which we have identified

How much capital does Sasol want to raise to solve its balance sheet issue?

How does Sasol plan to raise that capital and how is that plan going so far?

Self-help measures which Sasol has implemented

In the interim, Sasol has implemented the following self-help measures:

Figure 3 below shows the assets currently being held for sale.

If Sasol receives $3.0bn in proceeds from the 50% sale of its US base chemicals business, the company could raise c. $6.1 bn without a rights issue (Figure 4). In our view, it would be logical to believe that, in the event of this happening, Sasol would no longer require a rights issue since it would have reached its target of raising $4bn-$6bn in proceeds.

Figure 4: How Sasol would raise the capital without a rights issue

As stated earlier, Sasol now seems to view a future rights issue as a base-case rather than a worst-case scenario. However, if, for example, Sasol received $2.0bn for 50% of its US base chemicals business, there could be a rights issue of only $900mn or 18% of the company’s current $4.9bn market cap.

Figure 5: Sasol rights issue if 50% of the US base chemicals business is sold

We think that all will depend on the size of Sasol’s asset disposals and, in particular, the 50% sale of its US base chemicals business.

How much in earnings/free cash flow to firm (FCFF) can Sasol generate going forward?

The fact that Sasol’s capital expenditure (capex) should significantly decline this coming year (Figure 6), since spending on its Lake Charles Chemicals Project (LCCP) is complete, will work in the company’s favour. 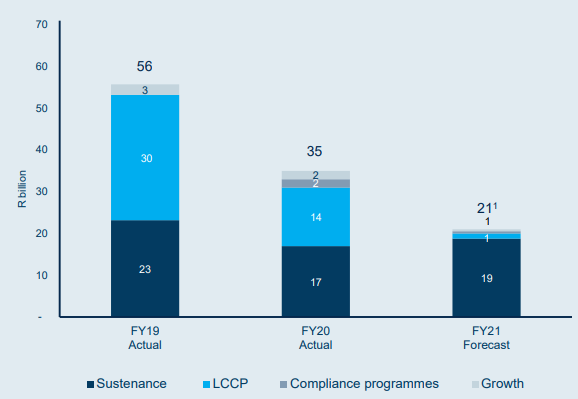 Bloomberg consensus analyst EPS forecasts are expecting c. R11.50 in FY21 and around R30 in FY22. 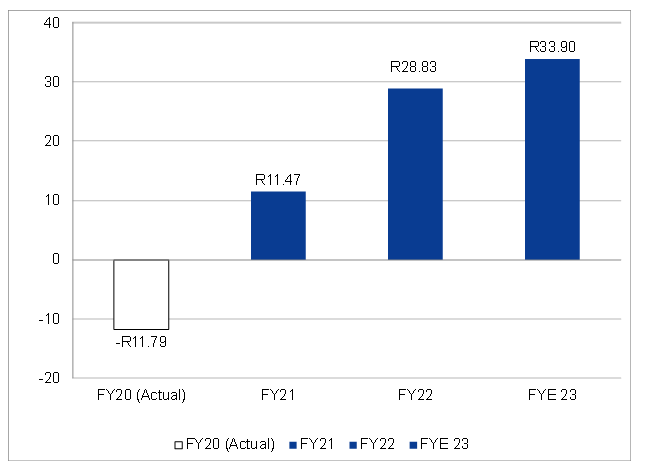 While we expect Sasol’s FY22 EPS will be significantly stronger than in FY20, it is nevertheless important to highlight that these numbers do not take a 50% US base chemicals divestment into account.