Prosus (JSE code: PRX) was listed on the main board of the JSE and on the Euronext, Amsterdam on 11 September 2019. Prosus includes the international internet assets of Naspers and the listing was a further step by Naspers to unlock shareholder value following the unbundling of MultiChoice in March 2019, which unlocked c. $3.5bn for Naspers shareholders. Prosus currently has a market cap of c. $108bn, with a net asset value (NAV) of $150bn. The value of the Group’s Tencent stake alone stands at c. $124bn. It is currently trading at a discount to NAV of 30%, while the discount to its Tencent stake is c. 13%. Prosus is by far the biggest consumer internet business in Europe and is mostly focussed on high-growth emerging markets (EMs), which we believe makes sense since Asia will, over the next decade, see the greatest absolute increase in consumption spending of any region in history. 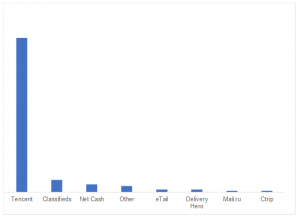 Prosus, which currently we believe is best thought of as a technology venture capital fund, holds a portfolio of both listed and unlisted investments. The three main internet verticals in which its more recent investment activity has been concentrated are Online Classifieds, Payments & Fintech and Food Delivery. These were the focus of what was discussed at the event which we summarise below:

Online Classifieds: This segment, which includes the OLX Group (multiple emerging markets), Avito (Russia), and letgo (US mainly), is a portfolio of investments that management is targeting a c. $20bn valuation by 2025, with consolidated revenue of c.$1.2bn by March 2020 (In 1H20 this stood at $596mn). As Prosus has successfully begun to monetise its platforms in markets where it has established a leadership position, revenue grew at a healthy clip – c. 37% in the last financial year. An important milestone was also reached in the last financial year, with this segment reaching breakeven at an operating profit level for the first time. It operates in over 30 markets and is the market leader in 27 of those markets (a critical requirement in what is a “winner-take-most” model). These markets have different “mature” operating margins ranging from between 20% and 50%. A recent shift in strategy, has been the move into what Prosus calls “convenient transactions”. This is requiring increased investment expenditure in the short term to build the necessary infrastructure to provide these value-added services (inspections of second-hand vehicles and preparation of a report, facilitating the exchange of second-hand goods and payments, for example). This investment is putting pressure on profitably at the moment but is intended to create a stronger competitive moat around these platforms.

Payments & Fintech: Prosus’ payments and fintech investment portfolio (dominated by PayU), has a vision to reach a $10bn–$15bn valuation by 2025 (from c. $3bn currently). The company, founded in 2002, is based in the Netherlands and enables merchants to accept payments from customers via a huge range of different payment methods. For example, in India there are over 100 digital alternative payment methods.

Prosus’s fintech investments operate across 30 different markets (including 5 of the top-10 fastest-growth markets from a digital payment perspective). Aside from facilitating payments, it is also involved in cross-border money transfer and, as it builds transactional histories on customers (most of whom do not have existing credit scores), it is starting to extend credit too. Its medium-term targeted operating margin is 12%–15% (it currently stands at 4%). Of all the markets in which it is active, it is clear that management is most excited about the opportunity that exists in India.

Food Delivery: Prosus’ food delivery investments already make it the largest player globally, excluding Just Eat Plc, for which Prosus has recently made a takeover offer. This cluster currently has three pillars: i) iFood, based in Brazil; ii) Swiggy, based in India; and iii) a 22% stake in Delivery Hero, which is listed in Germany, but predominantly operates in Emerging Asia and the Middle East. The various CEOs gave a rundown of each of these businesses, which we highlight below: 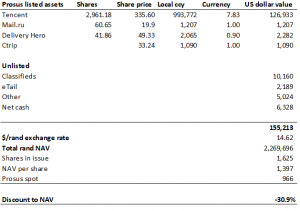 We found the investor day to be very informative, especially regarding the company’s unlisted portfolio. However, the discount to the sum-of-the-parts/NAV/intrinsic value, which now stands at a whopping $50bn (according to the company’s numbers), remains top of mind for investors. We did not identify anything in the short term that will close the discount sustainably/structurally. Nevertheless, management is working on a multi-stage process to reduce this discount, but it wouldn’t elaborate on this and it was also not prepared to provide a timeframe, only stating that the Prosus listing was the first step in this process.

Several investors asked about the stake which the Public Investment Corporation (PIC) holds in Prosus and whether the PIC is selling down and putting pressure on the share price. The new Prosus listing seems to have given management “more optionality” in terms of how to handle the narrowing of the discount (the new structure allows management to monetise Tencent and distribute cash with zero tax leakage), but again management wouldn’t elaborate on this.

The Prosus exercise has also been successful in opening the Group up to a much wider set of investors, but it will take time (even years) for some of the larger institutional European investors to gain confidence in the management team. In the words of the CFO, that journey has only just begun. For local investors and investors restricted to Europe, it appears as though NPN/PRX will continue to be an extremely costly entry point to the high-growth Chinese ecommerce market – probably not forever, but for now it’s potentially an interesting value play for unconstrained investors

Currently, we estimate the discount to NAV on Naspers to be 45% and for Prosus 30%. In Figure 3 below, we show how this compares with history and since Prosus listed. While it is difficult to say what the “right” discount is, a 45% discount on Naspers is as close to wide as it has ever been. 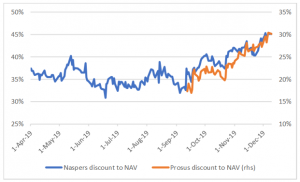