Netflix reported quarterly results on Wednesday (17 July), which showed that 2Q19 revenues and operating profit grew 26% and 53% YoY, respectively. These robust growth metrics were not the focus, however, as investors were disappointed by lacklustre subscriber numbers.

Domestic US subscriptions actually declined by 126,000, while international subs grew by 2.8mn. The net 2.7mn new subscribers was well below both the street and management’s own forecasts (for the history of the latter, see Figure 1 below). Netflix shares fell 10.3% post results on Thursday (18 July). 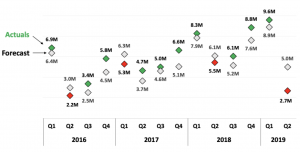 Management attributed the disappointing numbers to the following:

The punishment the stock received following the result reflects concerns that 1) Netflix is approaching maturity in the US, and that the upside potential is lower internationally; and 2) that this is happening before competitors launch their own streaming services.

So, the question remains, is this assessment correct and where to from here?

It is quite possible that Netflix returns to its trend growth rate next quarter, and that this is just a blip on the radar. That’s what management thinks will happen. 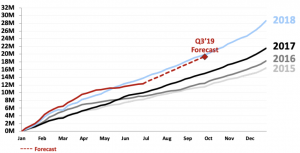 We don’t know whether it will take one quarter or several, but our base case is that the structural story is intact. Netflix’s value proposition is, we believe, only getting stronger over time – both in absolute terms and relative to 1) existing pay TV bundles (cable/satellite) both in the US and internationally; and 2) upcoming streaming services (bar Disney, which is a different animal altogether). Reed Hastings (CEO/Founder) and Ted Sarandos (Chief Content Officer) as well as other key members of management understand the Netflix flywheel and are putting all their efforts into maintaining its momentum.

The new streaming services launching in the US initially and later internationally have a mountain to climb. While there’s a good chance they will collectively accelerate the fraying of the cable bundle (i.e. grow the overall market, which will benefit Netflix) there is no way they can compete with the buying power afforded to Netflix by its 150mn subscriber base (which is likely to get close to 200mn by the end of 2020). How do you pay for $12bn worth of content with a standing start of zero subscribers? How long can you withstand the losses before throwing in the towel? Studios like NBC (The Office) and Warner (Friends) are pulling content from Netflix for their own services. We think they’ve got the causality backwards: people watch The Office or Friends because they’re on Netflix, not the other way around. We wouldn’t be surprised to see these shows eventually returning to Netflix because the studios can’t monetise them to the same extent on their own services, given their much smaller audiences. There might be a small amount of room for these players in a growing market; if however the US is close to maturity in terms of streaming, then these players have zero hope of reaching scale.

There will be noise when these competing services launch, and we wouldn’t be surprised to see Netflix’s subscriber churn increase for a period. Despite any share price volatility these battles create, we believe that Netflix has already won the war. Based on that long-term thesis (and we are open to evidence that it’s wrong), we view share price weakness as being temporary and ultimately a buying opportunity.

We caution that the views expressed above relate to our long-term assessment of Netflix’s competitive advantages and we highlight that it is not a recommendation to buy the stock in anticipation of a ‘beat’ in 3Q19 subscriber growth. If those numbers fall short, Netflix will take another hit. Taking a position on short-term directional outcomes – in the absence of evidence (which we don’t have at the time of writing) – is not recommended.