Naspers/Prosus: A true test of our long-term investment temperament

Well, so much for the theory that as we turned the page on 2021 – an annus horribilis for Chinese shares caught up in the crosshairs of a domestic regulatory crackdown and Sino/US power politics, compounded by the very poorly received attempt to unlock value via a Prosus shares for Naspers shares exchange – 2022 was set to be a year of recovery. By the end of 1Q22, Naspers and Prosus had declined by 33% and 39%, respectively, while Tencent (which accounts for c. 75% of the Naspers/Prosus NAV) had lost 16%. Note too that until early February, Prosus was still busy with its US$5bn share buyback, which makes its performance in the quarter all the more surprising.

Part of the disparity in performance between Naspers/Prosus and Tencent is explained by the exchange rate (the rand appreciated by c. 10% against the US dollar over 1Q22), but there was also a notable widening of the discount to net asset value (NAV) to historic extremes.

Until shortly before the Russian invasion of Ukraine in late February, Tencent’s share price was in positive territory for the year. However, this tentative recovery was snuffed out as Chinese regulators pushed for further reductions in fees charged by food delivery platforms, leading to speculation that China’s regulatory crackdown on its technology giants has further twists in store. This sell-off gathered momentum as investors considered the broader implications following China’s close friend Russia’s invasion of Ukraine.

While reasons for the continued share price weakness in Naspers/Prosus’s key investment, Tencent, are clear, one may well ask what lay behind Naspers/Prosus’s significant investment underperformance against even this low bar. Although the extent of the underperformance suggests there may have been some non-fundamental factors in play (a large shareholder repositioning its portfolio perhaps?), focusing on the non-Tencent part of the portfolio (accounting for c. 25% of NAV), some possible explanations include: 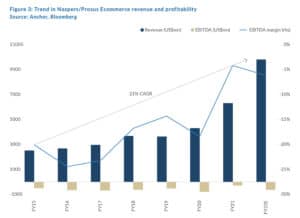 While the above provides context behind the very poor investment performance of Naspers/Prosus in recent times, the critical question is what investors, many of whom had used these shares as a reliable central pillar around which they had built their local equity portfolios, should do now? In periods of strong investment returns from Naspers/Prosus, it is easy to imagine adding further to the position should a significant pullback occur, the problem is that the risks responsible for such a pullback loom large. Market commentators, reflecting the sentiment of the day, stress further downside risks, which means emotionally the easiest course of action at this point is not to add further but rather to cut the risk of further losses (capitulate?) and switch into other investments that are in favour. Political developments in China and signs that the authorities there are beginning to interfere more in the commercial decisions of its private sector cement even more strongly in our minds the view that the high individual company weighting that many SA investors were comfortable holding in Naspers/Prosus needs to be re-evaluated for the future, but this is not the time. Right now, as long-term investors, we believe it calls for us to show the strong temperament to do what makes us feel uncomfortable – that is hold the line with this investment and be patient.

Yes of course there is the possibility that those looming risks that lie behind the sell-off to date intensify further, leading to additional downside for the shares. China using the current global focus on the Russia/Ukraine conflict as an opportunity to annex Taiwan, for example, would be an event, if it was to occur, that would undoubtedly lead to a further exodus from Chinese equities by international investors. However, there are some encouraging signs that the investment tide in China may be turning more positive too. These include:

To conclude, in better times, if one was to sum up what an ideal situation would be in which to build exposure to Naspers and Prosus shares it would likely be a combination of (1) a relatively strong rand exchange rate; (2) Tencent’s valuation being attractive; and (3) the Naspers and Prosus discount to NAV being at an attractive level. The problem is, in these happier times, one seldom considers whether you will have the emotional fortitude to stare down the risks that have pushed the shares into what we might call “golden tri-factor” territory, when all three factors align at the same time, and invest. There remain issues that still hang over the investment case for Tencent and, by association, Naspers and Prosus. China’s stubborn pursuit of a zero-COVID policy and its continued refusal to resume new online game approvals to name a few. Sadly, it is the nature of markets that you are unlikely ever to get the comfort of both certainty on risks and the golden tri-factor of value factors you wish for. We see some encouraging signs that the tide may finally be turning and, judging by the sizeable share buybacks being made by Tencent since the release of its latest results, maybe its management does too. For many SA investors, holdings in Naspers and Prosus are already sizeable exposures in their local portfolios and our advice is to hold fast. For the rest, the golden tri-factor being in place is a rare occurrence indeed and presents a great opportunity for long-term investors to be accumulating exposure.