Although Prosus’ offer to issue new shares in exchange for Naspers shares was met with widespread disappointment by shareholders of both companies, it has now received the requisite shareholder support. It will therefore go ahead, regardless of shareholders’ reservations and Naspers shareholders will shortly face the decision whether to tender their shares in exchange for Prosus shares. Since the share exchange will be treated as a disposal of Naspers shares by the South Africa Revenue Service (SARS), and thus a taxable event for tax-sensitive Naspers investors, this is likely to be a particularly tricky decision. For tax-sensitive investors, the correct decision is likely to come down to one’s own personal situation – this is not a case of  “one-size-fits-all”. The purpose of this article is to share our thoughts on what investors should consider when making the decision on whether to tender their shares.

The key terms of the offer being made by Prosus are as follows:

The important dates that Naspers shareholders need to keep in mind are:

Impact of the exchange offer on shareholders

By using Prosus shares, which trade at a narrower discount to their underlying net asset value (NAV), as the “currency” to buy the more deeply discounted Naspers shares, there is an uplift to the NAV underpinning the shareholdings of both Naspers and Prosus’ public shareholders. “Public shareholders” are shareholders in each company other than the companies themselves. An agreement has been drawn up in terms of which the shares that Naspers and Prosus own in each other, after this exchange offer is concluded (a crossholding in other words), will be treated as if they do not exist when it comes to how the economics flow to shareholders.

Typically, investment markets price in the impact of new information extremely quickly. With that in mind, one would have expected the Naspers discount to NAV to close as the market “prices in” the increased underpin to NAV that this transaction will produce. Interestingly, if we track how the discount has moved since the exchange offer was initially announced on 5 May, this has not happened – while the discount did narrow initially, it seems that, as investor opinion began to turn more negative (as the understanding of the offer became clearer), the discount actually widened.

Figure 1: Trend in Naspers discount to NAV since share exchange offer was announced 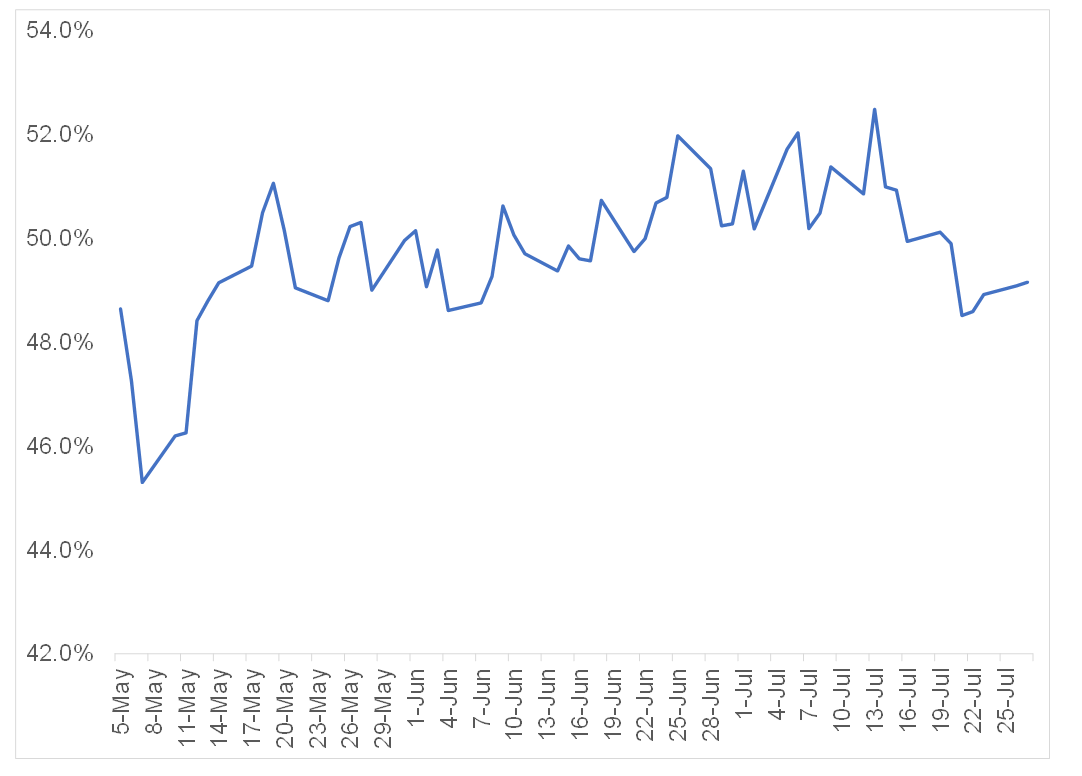 The fact that the market does not seem to have priced in the NAV uplift, particularly now that the exchange offer has been approved by shareholders and is therefore guaranteed to go ahead, is tricky to interpret. The more negative interpretation at this point is that Mr. Market is likely to apply a 6%-10% wider discount to NAV on both Naspers and Prosus, after the exchange offer is concluded, than it did before. The justification for this wider discount might be the added complexity that is now introduced through the large crossholding structure, irrespective of management’s efforts to convince investors that the agreement overcomes complexity normally associated with crossholdings.

If the two shares simply end up trading at a wider discount than they did before, and thus saddle investors with juicy advisory and execution costs for no value unlock, it will certainly leave management with considerable egg on its face. This is particularly so given how vocal management has been about the time and effort invested in evaluating all the value unlock options. The reality is that the deal is going ahead, and the question is what Naspers investors should do?

Our thoughts on how Naspers investors should approach the offer

For those investors whom tendering their Naspers shares will not trigger a tax event (i.e., those holding Naspers shares inside a retirement product or living annuity, for example), we think the correct decision is to tender your Naspers shares. The main rationale for this is simply that, as we explained earlier, this option results in a larger uplift to the NAV underpin of your investment than doing nothing and thus keeping your investment in Naspers unchanged.

One possible area of doubt for investors may lie in the long-held belief that Naspers, trading at a c. 50% discount to virtually the same assets as Prosus, which trades at a c. 36% discount, naturally represents the greatest potential for value unlock. So, why would you exchange your Naspers shares for Prosus shares for a relatively small additional uplift? We think there are a couple of points to consider here:

For tax-sensitive investors, Naspers shares that are exchanged for Prosus shares will be treated for tax purposes as if they have been sold. For those sitting on large unrealised gains on their Naspers holdings, does it make sense to tender one’s Naspers shares and thus trigger a capital gain? We think this is going to come down to investors’ personal circumstances. Some things to think about when deciding what to do are:

In summary, it is tax-sensitive investors with large unrealised capital gains on their Naspers holdings that likely face the most difficult decision on whether to tender their shares or not. It is very possible that the CGT arising from this will exceed the additional NAV uplift those tendering their shares are in line to receive. It is understandable that investors faced with this outcome would likely opt to avoid triggering the gain.

However, for SA investors who have a high Naspers concentration in their portfolios currently, exposing them to the unpredictability of Chinese regulation as aptly demonstrated by recent experience, the question needs to be asked whether this risk is justified by the avoidance of tax alone. With many more ways to gain investment exposure to the technology investment theme currently, this exchange offer may well provide an opportunity to reduce risk and take advantage of these.