The World Health Organisation declared COVD-19 a global pandemic in March as the virus spread to all parts of the globe. Countries around the world implemented draconian restrictions on movements resulting in economic activity grinding to a halt. Equity markets fell 11% in the last week of February and that drop continued unabated into March. By 23 March, the MSCI World index was down 25% for the month, putting global equity markets on track for their worst quarter since the Great Depression of the 1930s. Central banks and governments unleashed an avalanche of fiscal and monetary stimulus in an attempt to offset some of the economic damage. This helped developed market (DM) equities bounce 16% in the last week of March, leaving the MSCI World down 13.2% MoM and 21.5% lower for 1Q20 – only marginally better than 4Q08 during the global financial crisis (GFC).

Emerging market (EM) equities fared similarly for the quarter, down 25%, but with huge country-level disparity. China, which seemed to be through the worst of its COVID-19 crisis, saw its Shanghai Composite Index fall by 4.5% for March and recorded a 9.8% drop for 1Q20. Meanwhile, the Brazilian stock market was down 30% in March and South African (SA), Russian, Mexican and Indian stock markets dropped by between 15% and 25% for the month. EM currencies were also in the eye of the storm with the Brazilian real, the SA rand and the Russian rouble down by 14.1%, 12.2% and 14.8% MoM, respectively.

The US Fed had two unscheduled interest rate cuts – 0.5% on 3 March and 1% on 16 March. There’s only been one other unscheduled Fed rate cut ever – 0.5% in October 2008. US 10-year bond yields dropped as low as 0.3% during the month before recovering to 0.65% by month-end (giving US 10-year government bonds a 3.6% return for March). Corporate bonds were less fortunate, with US investment-grade corporate bonds down 7.2% in March and US high-yield bonds down 11.5% as credit spreads climbed to levels not seen since the GFC.

Amidst an unprecedented drop in the demand for oil, OPEC and Russia were unable to agree on supply cuts, starting a price war which saw Brent Crude fall 55% in March – its worst monthly drop on record. Online companies less exposed to movement restrictions fared well in the month, with Amazon and Netflix ending March 3.5% and 2% higher, respectively. The S&P 500 energy sector was down 35% in March on the back of the plunging oil price, while those sectors most exposed to the movement restrictions such as hotels, cruise lines, department stores and retail real estate investment trusts (REITs) saw their market values drop by more than half for the month.

Adobe is a software company with a dominant position in the markets it serves. Most of its business is the Creative Cloud product, which accounts for c. 60% of Group revenue (but likely a higher proportion of gross profit). Creative Cloud is a software-as-a-service (SaaS) offering that is effectively the gold standard for creative professionals and hobbyists. The subscription offering has many applications in it, including Photoshop, Illustrator, After Effects, Premiere Pro, Lightroom and InDesign.

Owning the premier product in its space confers several competitive advantages to Adobe that protect high returns on capital. Similar to many dominant software companies, Adobe’s high returns are protected by switching costs. For its users, it takes significant time to master the complex software applications offered by the company. Once familiar with a product set, switching to a competitive offering becomes a disruptive, and high-cost, endeavour for a Creative Cloud user. For professionals, this process starts early as educational institutions use Adobe software to educate students. A graphic design school, for example, is likely to teach students using Photoshop. This ubiquity continues into the workplace where collaboration within or between teams is likely to occur using Adobe applications.

Adobe transitioned to a subscription model several years ago and c. 90% of its revenue is now subscription-based. This trend has greatly benefited the firm’s working capital cycle. The business is effectively funded by customers that pay upfront subscription costs for access to Adobe’s products. A slate of market-leading products gives the company strong pricing power. The combination of recurring revenues and premium pricing results in fantastic financial metrics. Adobe earns high returns on equity (FY19: 33%) and high margins (its operating margin averaged 30% over the past three financial years), while continuing to grow quickly (revenues have grown at 24% over the past three financial years) thanks to a large addressable market.

We used recent market weakness to initiate a position in Adobe.

Meituan-Dianping is a Chinese online-to-offline transactional internet platform that connects 435mn Chinese consumers to 6mn local services businesses. It has around 35mn daily users. The app has become deeply integrated with daily life in China by serving as a highly convenient aggregation platform for purchases or transactions that one would make almost daily. Users can book hotels and flights, hail taxis, order food or participate in group-buying deals. Think of the platform as a “super-app” with Groupon, Grubhub, Uber, Tripadvisor and Yelp! all rolled into one.

As a merchant on the platform, the value is derived from the app’s geolocation services – which establish highly valuable “geospecialised” customer profiles for all its users. This enables merchants to pinpoint and match the demands of their respective target markets. Meituan-Dianping generates its revenue from commission on facilitated transactions, and by providing advertising and supply-chain related services to merchants.

Going forward, we believe that the potential for revenue growth is tremendous given the platform nature of the business. Plugging a single additional service into the app immediately opens the door to 435mn potential customers. Management have also demonstrated the ability to rapidly gain market share in new verticals through subsidised pricing – a strategy that becomes increasingly viable as the marketplace gains critical mass.

Although it is still loss-making, the company’s rate of revenue growth is tremendous (>40% YoY for FY19 and compound growth of 120% over the past 4 years). We expect Meituan-Dianping to break-even this year, and we hold the view that the market has underpriced the business’ prospects as it matures.

Stryker is a leading US medical technologies (MedTech) firm specialising in medical devices used in orthopaedics, surgery, neurotechnology and the spine. It is particularly well known for its hip and knee replacements. The company has been on Anchor’s watchlist for several years, but we were always of the view that it was too expensive to start a position. However, the recent market pullback has presented us with an excellent long-term investment opportunity in one of the world’s leading MedTech companies.

Stryker has a track record of seven consecutive years of organic growth, and it is expected to continue to profit from a growing global middle class and an ageing developed world population. Before the COVID-19 crisis, Stryker was expected to grow earnings by 10% p.a. for the next two years, whilst paying a 1.5% dividend that was expected to grow at a similar rate. While there is a risk that elective surgeries may be delayed for the 2020 year due to COVID-19, this would not be permanently lost revenue as patients will inevitably need to undergo these procedures as soon as possible. It is thus difficult to predict what the short-term impact of the virus will be on Stryker’s earnings, although we are confident that the company’s long-term prospects will more than negate any short-term volatility.

We believe that this is a defensive business which will complement our growth positions in a long-term equity investment portfolio. We would possibly add to the position in the coming months if markets were to fall further.

Stryker is currently trading on a 14x forward PE valuation, devaluing to levels last seen around the time of the global financial crisis. If the company’s long-term earnings growth rates stay at around 8%-10%, this puts it at a very attractive valuation. 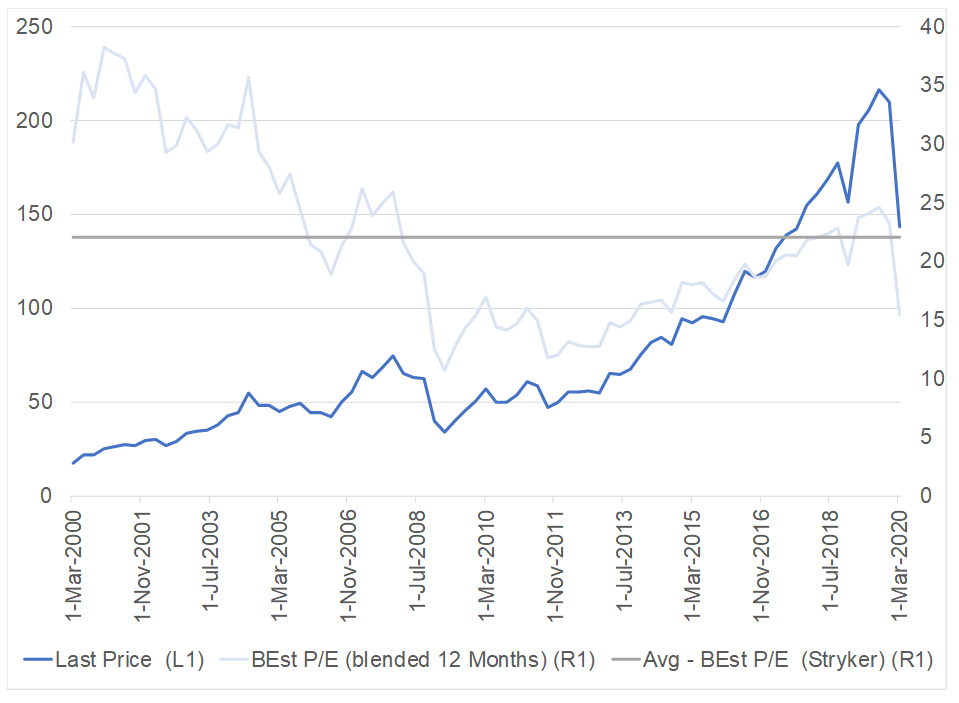