Many global markets have crashed and in recent weeks there were virtually no places in the world to make money in the “vanilla” investment world. The S&P 500 closed below 4,000 on 9 May 2022 after peaking in December 2021 at 4,800.

In times like these, Anchor is actively increasing the robustness of portfolios to ensure that we are well placed for the inevitable recovery. Many share price moves are illogical when the market is in panic, and we seek to take advantage of these. Investors will emerge with the highest-quality companies, with a focus on those that have clear growth paths, ideally independent of the uncertain economic outlook.

An internal Anchor investment think-tank on Monday (9 May 2022) saw differing views regarding the attractiveness of the market after the recent sharp drop. Some members of the Anchor investment team were of the view that we were through the worst, while others believed current conditions could prevail for another 3-6 months.

At times like these on markets, the meetings at Anchor become more frequent and every bit of the plethora of incoming analysis is voraciously consumed. And there is always a convincing argument by both the bulls and the bears. Volatility will almost certainly continue and, in the short term, equity markets could drop further (some believed by as much as 10%). However, for those with a long-term view, we have already reached attractive entry points in certain shares. Our approach for new investments would be one of phasing in.

While at the index level, the drops from highs are material (the S&P 500 is down 17% and the Nasdaq Composite is down 26%), some shares have held up and many (especially growth) investors have experienced far worse. Alpine Macro refers to the global market as a “stealth bear market” in a recent report, producing the table (Figure 1) below. The average price decline for a Nasdaq share is by a remarkable 45%-plus, as shown in Figure 1.

Simple index graphs provide context. The US S&P 500 price graph shows a 16% drop YTD. The graph looks (a little) better than it feels being an investor. A client of ours pondered in a meeting this week that “the pain of 15% down is so much more than the joy of 15% up”. The recent decline has come close to erasing the gains of 2021, but it would take a further 15% drop to reach pre-pandemic levels. Ironically, many of the “stay-at-home/COVID-19” shares are now below their March 2020 levels, despite their futures having changed forever (for the positive). 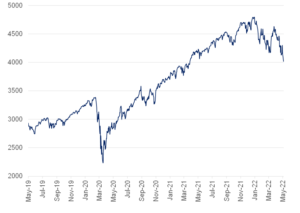 A longer-term S&P 500 graph (Figure 3) puts the market in better context – the 10-year graph is shown below. Drops of this magnitude are not uncommon and it certainly supports the mantra of “staying invested”. The market moves steadily upwards and always recovers from sharp corrections. Each market gyration creates an emotional response of wanting to “run-for-the-hills”, but each decline was an opportunity. Well at least eventually. 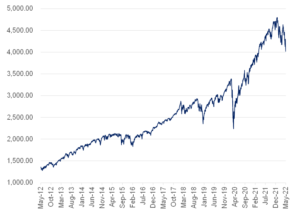 We have been cautious on global equities for some time, largely because of valuations, which have risen in recent years on the back of low interest rates. The recent correction takes the S&P 500 down to a forward 17x P/E (as shown in Figure 4 below). It is comforting that this is back in range, but it is by no means yet a bargain. Another 10% drop would make the market very cheap – levels seen very seldom in the past decade. As one can see below, a 15x forward P/E has consistently been a good time to buy. 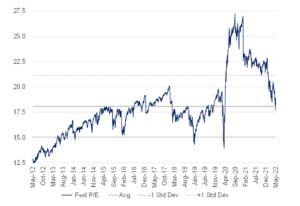 So, what is the root cause of where we find ourselves? Several factors have combined to ignite the fire of inflation (primarily in the US but following around the world). First, cheap money and government handouts boosted demand to record highs. Supply chain snarl-ups and COVID-19 inefficiency (e.g., ships lining up outside harbours) meant that supply could not respond to high levels of demand and prices started rising. Then came the double blow: Russia’s invasion of Ukraine limited coal, oil, and wheat supply, and China locked down cities at the first sniff of new COVID-19 cases. The result of all of this is 8% inflation in the US.

Now the US Federal Reserve (Fed) is closing the taps on “free money” (by increasing interest rates and stopping the buying of bonds) and asset prices are predictably responding accordingly. US 10-year bond yields of 3.2% would not have seemed a possibility only six months ago. The yield on this ultimate risk-free rate gives global asset pricing direction.

One bright light in Monday’s (9 May) market was a pullback in the US 10-year bond yield, giving some initial indication/hope that the bond yield might have started to price in the future outlook. A bond yield of around 3% feels about right if long-term inflation settles at around 2% two years out, giving investors a real return.

The bulls in our business believe that all of the above is well-known and is being priced into markets – “we are through the worst”. There is a wall of worry out there, but that is often when opportunities arise – the best times to invest are when it feels uncomfortable, and the news is bad. After a 20%-25% drop in markets, a snapback is fairly common. Consensus is overwhelmingly negative, which is common at the bottom of the market.

At a sector level, big-tech companies have followed their smaller (and less-profitable) counterparts downwards after initially holding up. Quality and growth investors have felt pain in recent months, as more boring, defensive businesses have held up. We believe that we are approaching the stage where the latter is becoming very expensive relative to growth, while the premium you pay for quality/growth shares is the lowest it has been in many years. Many companies with the best growth prospects are now trading at pretty attractive multiples for long-term investors. Conditions are beginning to line up for our investment appetite for high-quality shares at reasonable prices.

Conversely, the bears point out that there will be little respite from the current challenging conditions for several months and there has been “a fundamental shift in rate thinking”, which the market will take some time to fully reflect. The concern is that, while valuations are starting to reflect these realities, the pendulum could swing some more. Earnings forecasts are also still fairly high (15% growth for the next 12-months on the S&P) and have room to be downgraded if economic growth contracts (by more than the Fed expects) in reaction to higher interest rates.

US interest rates also need to be put in context and the rate increases forecast by the market are off a very low base. The US Fed funds rate projected for end-2023 of 3% is not particularly high from a historical perspective and capital projects can still earn positive real returns at this level of rates.

The nature of markets is such that they reflect the anticipated future relatively quickly and hence the rapid de-rating of the market which we are experiencing. We cannot predict how far the pendulum swings, but we seem to be approaching price levels that are pricing in a poor outcome. Another leg down will present some very interesting short- and long-term opportunities.

Investors who have no appetite for further volatility/downside in global equity markets have an uncomfortable choice if they cut risk now, locking-in losses and forgoing the possibility of participating in a recovery. For those in this camp, there are alternative investment solutions such as structured products, where investors willing to forgo some liquidity can achieve some level of capital protection against further losses while maintaining a healthy exposure to any recovery. Your investment advisor can explain these options to you.