Gold and Bitcoin: Is now a good time to invest?

We have had many discussions with clients recently about adding gold and Bitcoin to their investment portfolios.

Figure 1: Gold and Bitcoin investments have rewarded investors handsomely over the past few years

With the gold price having fallen by 16% since its August 2020 highs, many clients wonder if this perhaps presents a good opportunity to buy gold. Eye-watering price appreciation for Bitcoin, which seem to be gathering an ever-growing army of supporters, has also piqued most investors’ interest.

Before diving into the individual merits of gold and Bitcoin, it makes sense to take a step back and have a look at the framework which we use to make investment decisions. We think it is helpful to have this context before narrowing in on the specific investment cases for gold and Bitcoin.

The above is probably a vast oversimplification of investing but encapsulates the bulk of what determines investment returns over various investment horizons (the former predominantly over longer horizons, the latter typically over shorter horizons). We discuss the two perspectives in more detail below.

Future income from investments comes in many forms, including:

Analysis of future income potential tends to be focussed on a multi-year time horizon and involves trying to quantify:

Investments with a high degree of predictability of future cash flows (e.g., bonds or loans to credit-worthy borrowers), typically offer limited potential for significant above-inflation returns relative to those investments, which offer the prospect of meaningful future income growth. However, investments with the prospect of significant future income growth (e.g., innovative companies starting out in potentially disruptive industries) typically require many assumptions to forecast future cash flows and, as such, these offer the potential for superior long-term returns but with a much greater risk of not achieving those expectations. Skilled analysts will try to identify investments where the market is underestimating the future potential for income due to various reasons including:

Figure 2: The framework for evaluating the future income potential of financial assets 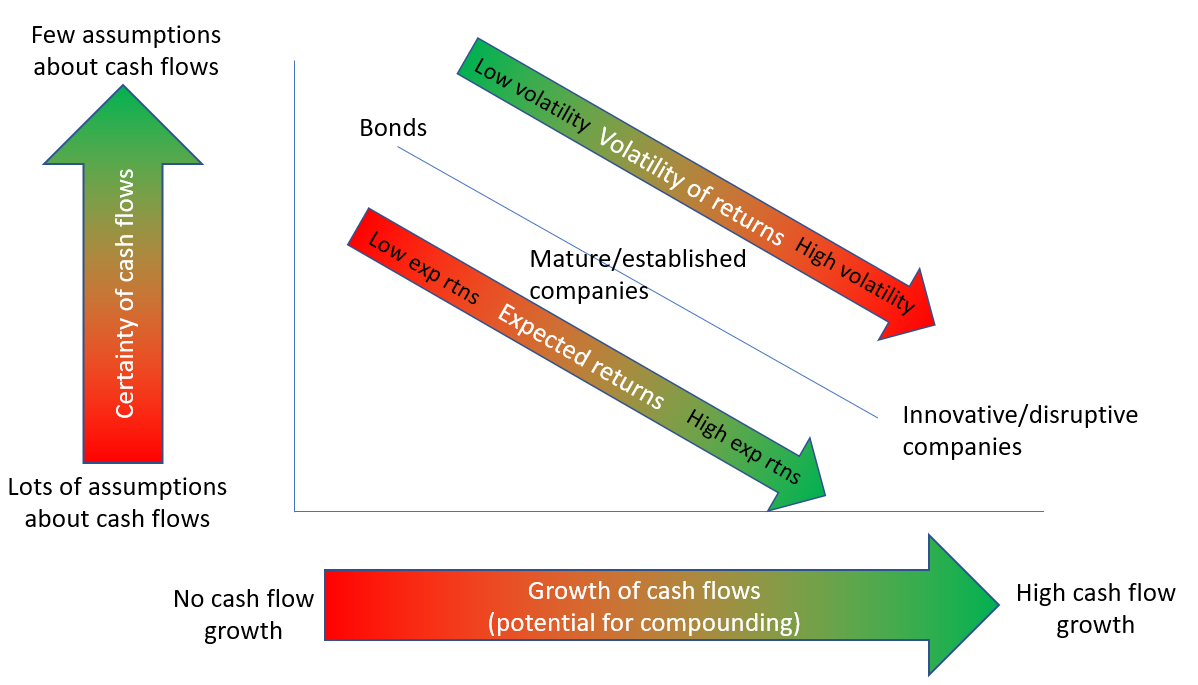 This economic concept suggests that the “invisible hand” of the market will nudge prices in the direction of an equilibrium between supply and demand. Supply and demand changes tend to be cyclical and transitory and price equilibrium tends to be achieved over a short time horizon (seconds to months).

Figure 3: Anticipating unexpected changes in supply and demand dynamics for an investment is key to understanding short-term price changes 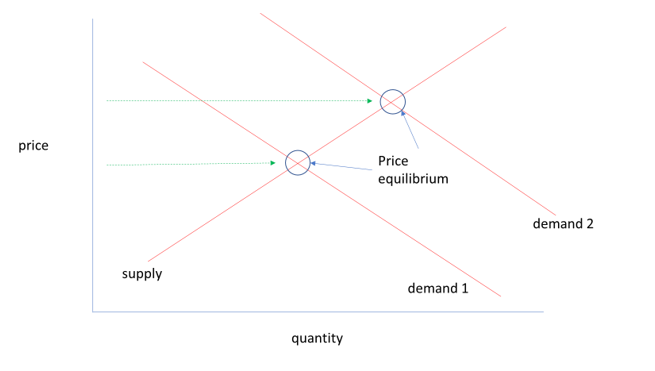 Skilled traders of financial assets, much like skilled traders of goods and services, tend to have a knack for buying securities in anticipation of temporary, unexpected excess demand, selling them at a higher equilibrium price or even selling ahead of temporary, unexpected excess supply to buy them back at a lower equilibrium price. Events that can impact supply and demand in financial assets include:

These factors (perhaps apart from idiosyncratic events) tend to be interlinked and are often influenced by the actions of governments and central banks.

These two perspectives work best alongside each other, with income-based valuation estimates providing an anchor against which to assess the extent to which anticipated supply/demand factors and trends are already factored into the market value of these investment.

While that was a very long-winded introduction to assessing the investment merits of gold and Bitcoin, we think it is also a crucially important one, since both of these investments are characterised by a lack of income-producing ability. This leaves us with only one lens through which to view these investments and that is the impact that supply and demand dynamics will have on their respective prices. Crucially, without the ability to estimate their present value based on future income, it is difficult for us to assess what expectations regarding trends in supply and demand are already built into the current price.

So, with only one possible leg of our valuation framework with which to assess gold and Bitcoin, let us delve into the individual merits of each.

We are going to attempt to frame the impact on supply and demand of the major factors influencing gold. However, before we do that, we need to understand that supply and demand for gold in the short- to medium term are predominantly a function of above ground supplies of gold changing hands. 80% of the world’s gold is already above ground, so most of the changes in supply are likely to come from above-ground sources (i.e., current owners of gold in the form of investments or jewellery, who are willing to sell those holdings should they assess the current price to be attractive).

Figure 4: Gold supply – 80% of world gold reserves are above ground 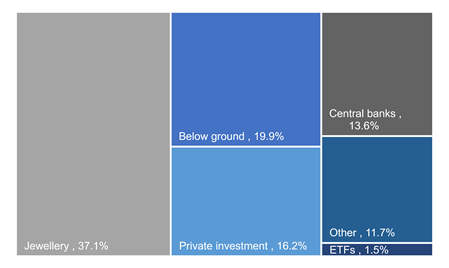 Figure 5: Rising real rates tend to act as a headwind for the gold price 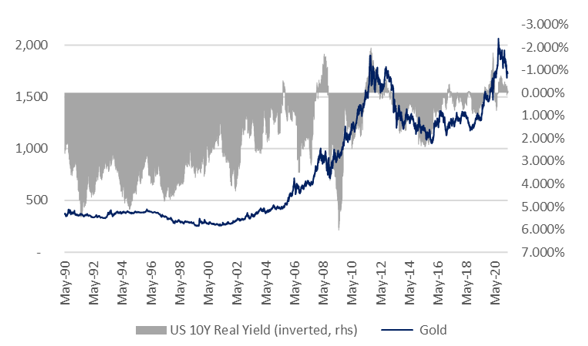 The final discussion point, regarding investments in gold, is the hypothesis that gold tends to insulate investors from inflation and act as a hedge against falling equity markets. Over the past 50 years or so, this inflation argument has not been particularly compelling. If you invested in gold in the early 1980s, when you had a real reason to fear inflation (US inflation was in the teens at that time), the value of your investment would have almost halved over the next 10 years as central bankers worked to tame inflation. This is perhaps a good example of the gold price in the early 1980s having been driven by excess demand from investors anticipating extended periods of high inflation which, ultimately, did not materialise.

Figure 6: The price of gold diverges from trends in inflation for meaningful periods 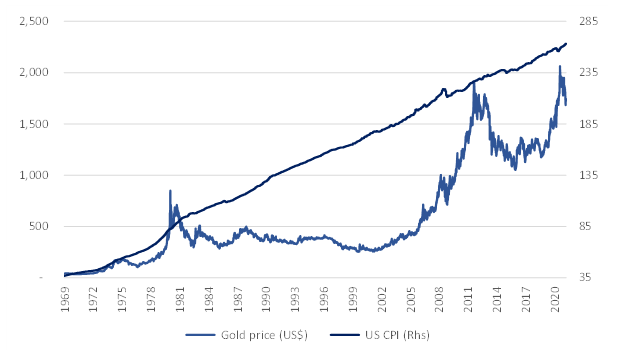 Gold does tend to act as a reasonable hedge against falling equity markets, but we note that it is not as reliable as government bonds at acting as a portfolio hedge.

Figure 7: Over the past 50 years, government bonds have tended to be more reliable than gold at hedging against equity market corrections.

Bitcoin and gold share many similarities, including the following:

Figure 8: Most bitcoins have already been mined 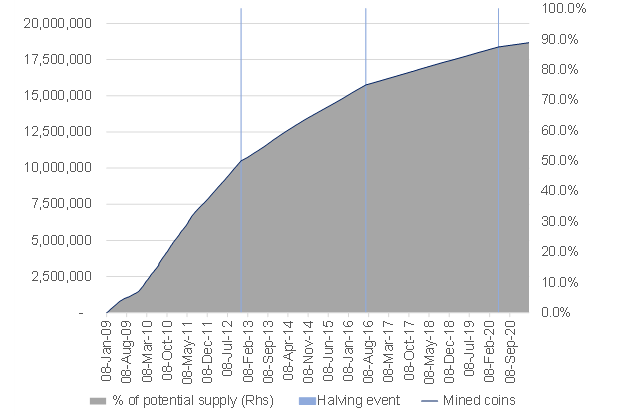 So, rising rates and a moderation in central bank activity may also act as a headwind to the price of Bitcoin.

We see the following as the major differences between Bitcoin and gold (at least as it relates to factors that might impact its price via supply and demand):

On balance, the likelihood of broader Bitcoin adoption and its impact on demand seems compelling. However, with this alternative currency still in its infancy relative to other investments and asset classes, it is difficult to forecast whether the risks to demand are going to outweigh that. Without the option of an income-based valuation as a sense check, it is almost impossible to gain comfort that its current price does not already incorporate significant assumptions about future demand.