Global markets ended the year on a sour note with fears of an economic slowdown spooking investors. US President Donald Trump did little to calm these fears as he forced a US government shutdown after the Senate failed to break an impasse over his demand for funding of a US/ Mexican border wall and he sent tweets suggesting he may interfere with the independence of the US central bank.

The first 26 days of last year saw the S&P 500 Index rally 8% on the prospects of US tax reform boosting earnings and economic growth but, while 2018 delivered stellar corporate earnings and economic growth, markets didn’t follow suit and a 9% drop in the S&P 500 Index in December was enough to leave it down 4.4% for the year. US markets (driven by US tech stocks) have led the way for the last couple of years, but that trend reversed in the latter part of 2018 and US markets underperformed other developed markets (DMs) in December for only the third time in 2018. Emerging markets (EMs; -2.7% in December) had a torrid time for most of 2018, but outperformed US markets for the second consecutive month in December as the S&P 500 tech sector recorded its worst quarter since the global financial crisis (GFC) in 2008. 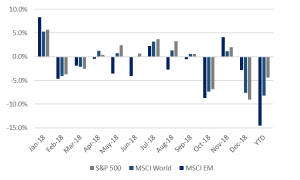 S&P 500 energy stocks were also among the worst performers in December, with the price of Brent crude oil continuing a slide that saw it get close to $50/bbl – down over 40% from its October high. Oil’s slump came despite the Organisation of the Petroleum Exporting Countries (OPEC) agreeing in early December to higher-than-expected production cuts and the US also reporting larger-than-expected inventory drawdowns during the month. Fears around the impact of slowing economic growth on the demand for oil seemingly outweighed positive supply news. US banks also performed poorly in December as collapsing yields did not bode well for the banks’ net interest margins and, by extension, their profitability.

The US Federal Reserve (Fed) delivered a much expected 0.25% interest rate hike at its December meeting (the ninth hike of this cycle) and chairman Jerome Powell did little to quell market fears as he suggested that the Fed was very much still in hiking mode despite financial market wobbles (and numerous tweets from Trump suggesting that the Fed was killing the market). US 10-year bond yields dropped by 0.3% during the month, as did US 5-year yields – which was enough to see them drop below US 2-year bond yields, causing the 2- to 5-year yield curve to invert. Some market commentators have suggested that the yield curve inversion was a sign of an imminent recession – while yield curves often invert ahead of recessions, its usually across a broader part of the curve and can happen with a lead time of up to two years.

In the UK, Brexit woes continued to hog headlines as Prime Minister Theresa May had to cancel a planned parliamentary vote on the Brexit deal she’d negotiated with her European counterparts once it became obvious she didn’t have the support to get the deal approved. A few days later May survived a bid by her party to remove her as leader, but with almost 40% of her own party voting against her.

Markets bounced after Christmas, with the S&P 500 Index up 7% in the last few trading days of the year although, even after that rally, December was still the worst month for the S&P 500 since February 2009 and the worst for the MSCI World Index since May 2012. The rally was helped by confirmation from Trump’s economic advisor that he would not be firing the Fed chairman and Amazon reporting record holiday sales. EMs also ended the month down, though for perspective we note that the negative 2.6% return for the MSCI Emerging Market Index was better than five of its other 2018 monthly returns.