November was a bit of a rollercoaster ride as markets anticipated the end-of-month trade discussions at the G20 summit between US President Donald Trump and his Chinese counterpart Xi Jinping. Reports of a constructive call between the two leaders in early November kept the momentum behind the late October market rally alive. However, within a week Peter Navarro, Trump’s key advisor on trade, threw cold water on the prospects of a sensible outcome.

Oil continued its capitulation during the month with Brent crude falling more than 30% from its $85/bbl high in early October to finish November at $58/bbl. Trump put pressure on the Saudis not to try and support the oil price with supply cuts and the Saudis, having blown through much of their political capital over the murder of journalist Jamal Khashoggi, complied. Concessions by the US on Iranian sanctions further exacerbated supply issues at a time when concerns around global growth were also tempering demand expectations.

The US Federal Reserve (Fed) refrained from hiking rates (as expected) at its November meeting and US government bonds were supported by comments from Fed chairman, Jerome Powell, that were interpreted as an about turn from his comments in October that the Fed still had plenty of room to hike before monetary policy became restrictive. The prospects of a shallower rate-hiking cycle going forward cheered equity markets, which appeared desperate for any good news. It was also enough to allow US 10-year bond yields to dip below 3% into month-end. Escalating concerns around corporate leverage saw US credit spreads widen further during November as aggregate investment grade yields rose to 4.4% at month-end having risen 35% during 2018 to levels not seen since 2010.

US investment grade bond yields back to 2010 levels 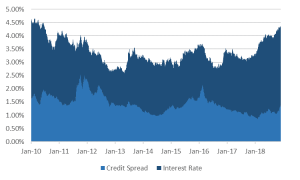 Lower US rates also brought a much-needed respite for emerging markets (EMs), which finally found some support in November with the MSCI Emerging Markets Index experiencing only its third positive month of the year. India is a big beneficiary of lower oil prices and saw this reflected in the strength of both its currency and equity markets, while results from large Chinese tech companies during the month did enough to reverse some of the share price declines seen this year.

In US equity markets, healthcare stocks were the biggest gainers for the month as US regulatory filings showed investment managers increasing their allocations to this defensive sector and lower rates were also a boost for listed real estate. Apple led the FAANG stocks lower during the month as disappointing earnings were followed by reports from its supply chain of material reductions in orders. European stock markets experienced another dismal month, and although the Italians agreed to some concessions in their fight with the EU over their fiscal plans, disappointing German economic growth data published during the month weighed on Europe’s largest economy. Brexit also continued to plague UK markets with Bank of England governor, Mark Carney presenting his assessment of the impact of various outcomes on the UK economy, including a hard Brexit which his analysis suggested could shrink the UK economy by more than the GFC and cause a 30%-plus drop in the value of the currency and UK commercial property. Prime Minister Theresa May appeared to make some progress on agreeing to a temporary exit strategy with the EU, but a slew of cabinet resignations and threats of a vote of no confidence showed how contentious the deal is.

British American Tobacco’s (BATS’) share price has come under significant pressure over the last two years, with the share having returned a negative 42% in British pound and a negative 38% in rand terms since January 2017. A combination of macro, sector-specific and company-specific factors have weighed on the share, including:

In our view, these factors would ultimately have proven to be transient – with the valuation appearing compelling on forward multiples of less than 15x and a longer-term earnings growth profile of 7% p.a. over the next 3 years with a dividend yield of over 5%.

However, on 9 November, The Washington Post reported that the Federal Drug Administration (FDA) was planning to announce measures to ban the sale of menthol-flavoured cigarettes in the US. The FDA then went on to formally announce the intended measures on 15 November.

Given that the menthol category accounts for 25% of BATS’ group operating profit after the 2016 Reynolds transaction, we believe this has negatively impacted the valuation of the business and has resulted in a materially higher level of balance-sheet risk. Unlike the previous issues that had weighed on the share over the past 24 months, this represents a structural headwind for the business, in our view.

A wide range of assumptions can be made around the eventual impact of the ban (e.g. menthol users quit, or switch to normal cigarettes or perhaps to competitor brands), with our base case suggesting a -8% hit to earnings once the ban is effectuated. This base case is grounded in customer surveys, which indicate that:

Figure 1: The impact of the menthol ban on market share of major tobacco producers 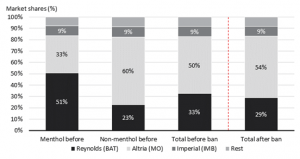 More important than the earnings impact, however, are the implications for the balance sheet. We estimate that the ban will add c. 0.25x to leverage levels (i.e. net debt: EBITDA) in the year of effectuation. While the business should still be able to service its debt repayments and deleverage at a rate of c. 0.4x net debt: EBITDA p.a., the company’s capacity to absorb any further revenue shocks, while maintaining the current dividend payout ratio, is very limited.

Although difficult to predict, any further negative step changes to revenue would very likely result in a dividend reduction – which we expect would be materially share price negative. We don’t believe shareholders are being paid to take this risk, and hence we have elected to exit the position in client portfolios.