The historic meeting between North Korean leader, Kim Jong-un and US President Donald Trump took place in Singapore on 12 June and was arguably the high point of the month before the possibility of trade wars stepped back into focus to spoil the party. Central banks were also in on the action during June with the US Federal Reserve (Fed) delivering a much anticipated 0.25% rate hike, while the European Central Bank (ECB) announced plans to wind down its quantitative easing (QE) programme by year end, but maintain rates at current levels until at least 3Q19.

Emerging markets (EMs) were in the eye of the storm during June, with the Brazilian stock market down over 5% and the Shanghai Composite Index ending the month 8% lower. The US implemented tariffs on $50bn worth of Chinese imports during June (this was a follow through on a proposal first raised in April) and then,  when China responded with its own measures largely targeting US agricultural imports, Trump ordered US officials to draft a list of an additional $200bn of Chinese imports that could also be targeted for tariffs. To make matter worse for China, economic data released during the month was disappointing, with industrial production and fixed-asset investment both coming in below expectations (the latter coming in at the slowest pace since 1999). In Brazil, the currency continued its slump, despite central bank intervention, with the Brazilian real down 15% in 2Q18. Trucking strikes, which had brought the country to a standstill in May, finally ended in early June as the government bowed to pressure to introduce fuel subsidies in a return to less market-friendly practises at state oil company, Petrobras. This resulted in the resignation of CEO, Pedro Parente and spooked investors. Russia and India’s stock markets were largely unscathed for the month, but the losses in Brazil and China were enough to leave the MSCI Emerging Market Index down over 4% for June. 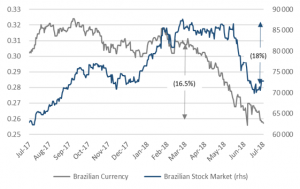 Oil prices were again higher in June as large drawdowns in US oil inventories surprised markets. Outside of oil, commodities had a poor month. Agricultural commodities suffered from the tariffs China imposed on US agricultural imports, while industrial commodities sold off on weak Chinese economic data.

US equities managed to eke out a positive return for the month, with the S&P 500 dragged higher by the interest rate sensitive real estate and consumer staples sectors, which benefited as risk aversion kept a lid on bond yields. The US dollar was also positive against most major currencies as the country’s monetary policy continues to diverge from other major developed markets.

Starbucks updated elements of its 3Q18 (June 2018) and long-term guidance on 19 June, which saw the company’s share price plummet by 9.1% the following day. The most important points of the announcement were: 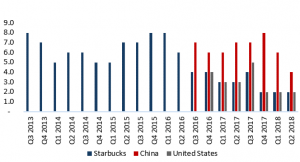 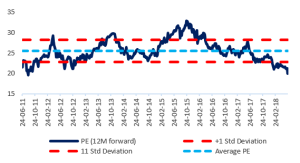