Global Inflation: What is all the fuss about?

Since late 2020, when the rollout of effective COVID-19 vaccines started, investors have been concerned that demand from normalising economic activity, at a time of unprecedented fiscal and monetary stimulus, will result in runaway inflation (primarily in the US). Inflation itself is not necessarily what scares investors but rather the fact that central banks will need to drain liquidity from the system to fight rising inflation and that will theoretically have dire consequences for asset prices.

Declining yields have forced investors to take on more risk to achieve the same outcome. Below we highlight how investors have been able to achieve a 4% average yield by decade (from the 1990s to date):

The above is true even though US inflation has not really changed dramatically over the abovementioned periods (it averaged 3% in the 1990s). 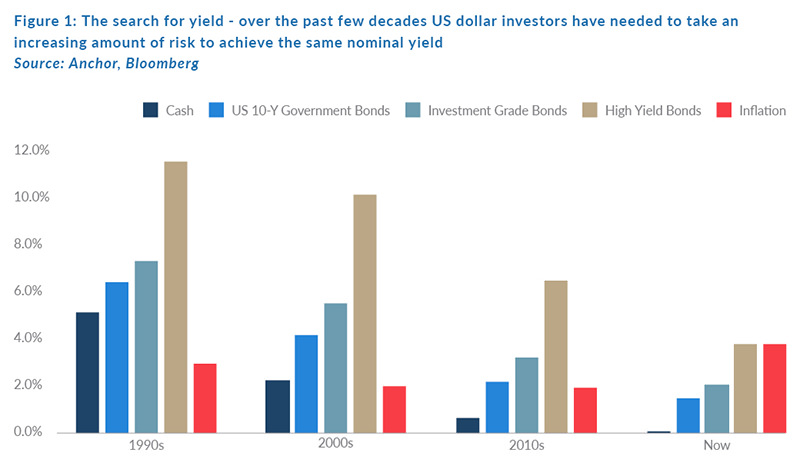 The theory is that, if US monetary policy reverses and drives yields higher, investors can shift back into less risky assets to achieve their investment goals and that reversing the search for yield will put downward pressure on equities, which are trading at above-average ratings. 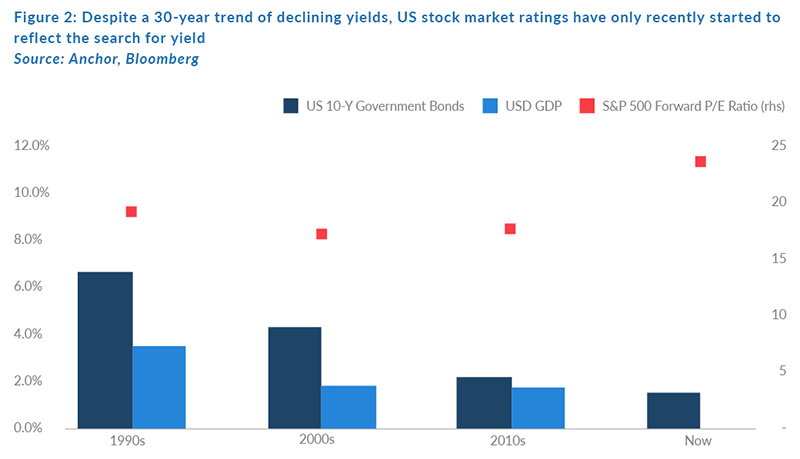 In this note we briefly explore two questions:

For the purposes of this note, we focus on yields and inflation in the US market, which is not only perceived as the most likely to see higher inflation and yields but is also by far the largest financial market in the world. The US dollar also tends to form the starting point against which most assets are valued, at least for the foreseeable future.

HOW LIKELY ARE WE TO SEE PERSISTENTLY HIGHER US INFLATION?

Among the abovementioned three categories, only economists have a fair degree of faith in the Fed’s ability to maintain inflation at around its 2% target level for the next few years:

For context though we also highlight the following:

Below we consider the Fed’s preferred measure of inflation (core personal consumption expenditure [PCE] inflation) and we divide the basket into three main categories:

In the two former categories, we believe inflation will be transitory and, as such, will be ignored by the Fed. 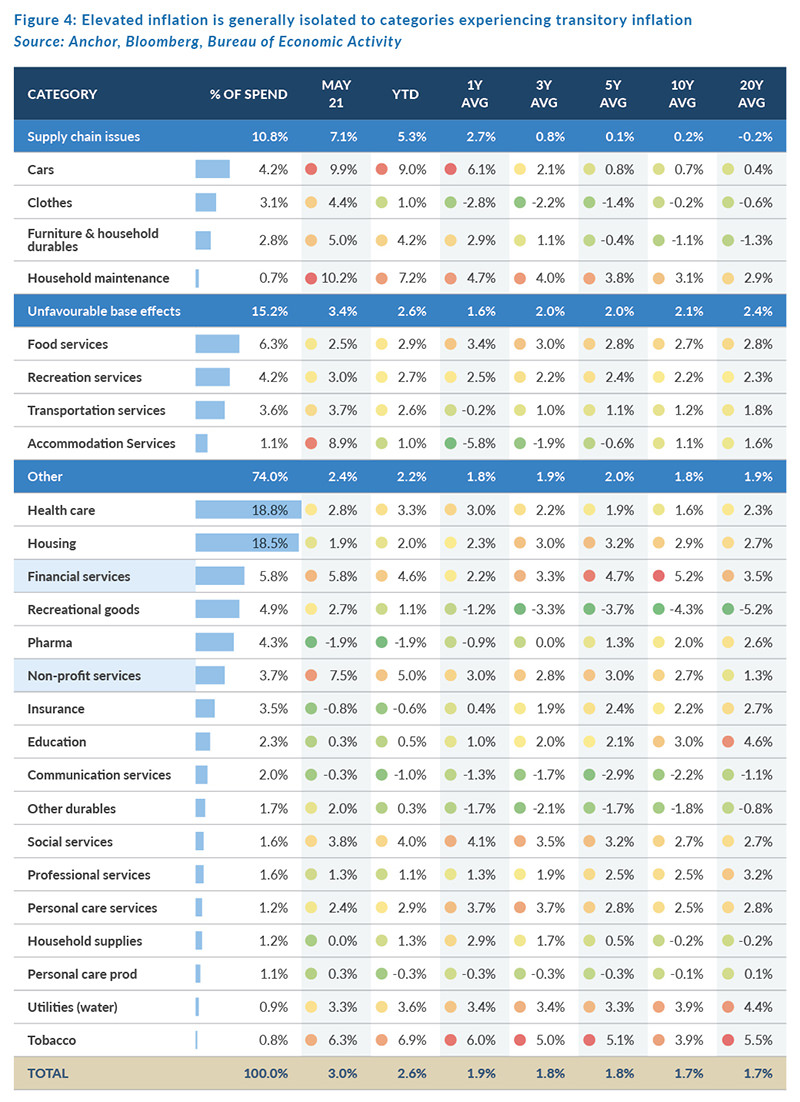 Ignoring those categories that we believe are experiencing transitory inflation, the only other categories where we see concerning US inflation trends are:

On balance, we are sanguine about the prospect of inflation remaining elevated for extended periods but with two important caveats:

HOW LIKELY ARE WE TO SEE MEANINGFULLY HIGHER RATES/YIELDS?

The COVID-19 induced recession was an unusual one in many respects including the depth of the contraction and the pace of the recovery. However, perhaps the most stark for the US economy, which is generally held up as the model of capitalism, was the extent to which the government shouldered the burden of the economic contraction, leaving private sector balance sheets relatively unscathed. 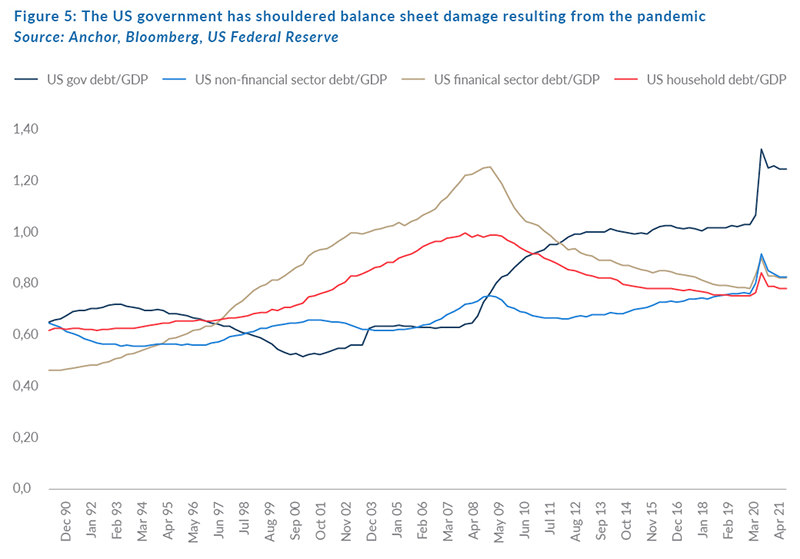 US households and the US financial sector went into this crisis in much better shape than they went into the 2008 GFC, entering the COVID-19 pandemic with 38% and 25% less leverage relative to GDP, respectively. Importantly, they collectively took on negligible additional debt to survive the pandemic, thanks largely to the US government’s efforts. If employment normalises relatively quickly, that leaves the private sector reasonably immune to higher rates. Even non-financial corporates, who have been steadily increasing debt over recent years, entered the COVID-19 crisis with a similar amount of leverage relative to US economic output than they took into the GFC. While these non-financial corporates slightly increased leverage to survive the pandemic, much of that leverage will be in fixed-rate debt and with historically low interest rates, they are (at least collectively) likely fairly immune to higher rates.

The US government, however, is the exception, having more than doubled its leverage relative to the level it took into the GFC and so it is in the context of the government’s dramatically higher leverage that we consider the impact of higher rates. The US as the custodian of the world’s reserve currency (at least for the foreseeable future) has arguably unlimited access to debt, so that is certainly not an imminently limiting factor. It is also likely to want to grow its way out of the additional debt (via higher GDP rather than lower debt) instead of tightening its belt to achieve lower gearing through fiscal austerity. It does though seem reasonable to assume that it has run out of runway to keep US long-term rates artificially low via quantitative easing (QE), with economists now forecasting that the Fed will stop expanding its balance later this year.

However, the Fed is also unlikely to start shrinking its balance sheet anytime soon and, in fact, towards the end of 2019 (about a year into the previous efforts to shrink its balance sheet) the Fed reversed course on the basis of a new theory that it should expand its balance sheet at the pace of nominal GDP just to keep it from tightening monetary conditions. So, with tapering as the most imminent threat to higher funding rates, we compare the current conditions to the last taper tantrum in 2013, when the Fed’s announcement of its intention to stop QE resulted in US 10-year bond yields spiking by over 1%.

In our view, the biggest positives currently, relative to the 2013 taper tantrum are:

Conversely, we believe that the biggest negatives currently, relative to the 2013 taper tantrum are: