China is the largest market for the luxury goods sector 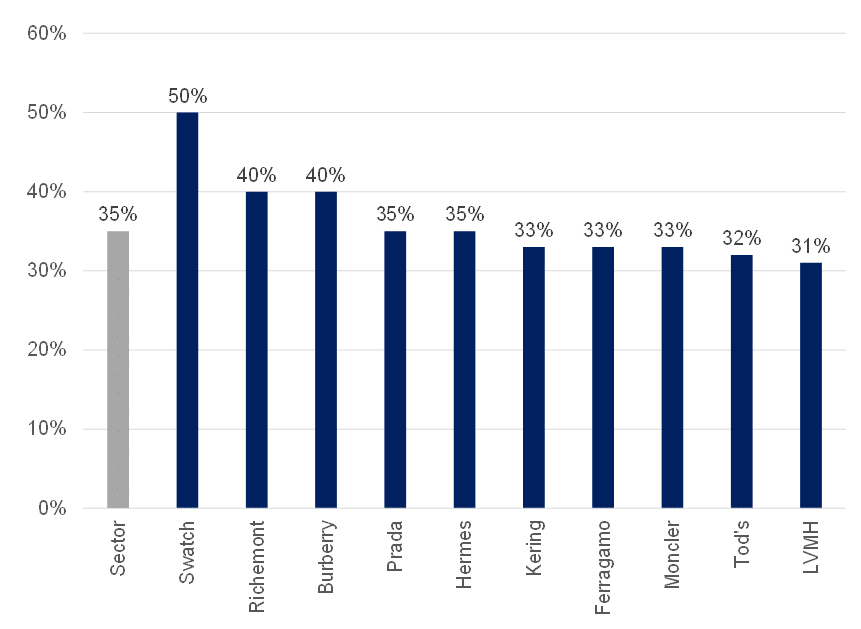 China’s transition to its 14th five-year plan has caused considerable pain for many stocks believed to be on the wrong side of shifting Chinese regulatory changes. The luxury goods sector is the latest to see a significant derating as Chinese media reported that President Xi Jinping suggested it might be necessary to “reasonably regulate excessively high incomes” in the search for “common prosperity”.

Concerns that Chinese consumers might shy away from “conspicuous consumption” on luxury goods to avoid drawing attention to their wealth or that the government may introduce redistributive taxes that would siphon off disposable income otherwise available for luxury goods purchases are at the heart of the most recent derating.

Common prosperity as a driver of long-term structural growth

Common prosperity, at its heart, has the goal of minimising the proportion of both high- and low-income sectors of the population.

If China meets its goal of an “olive-shaped” income distribution, this will see China’s middle-class population double over the next decade.

Figure 4: China aims to double its middle-income population over the next decade 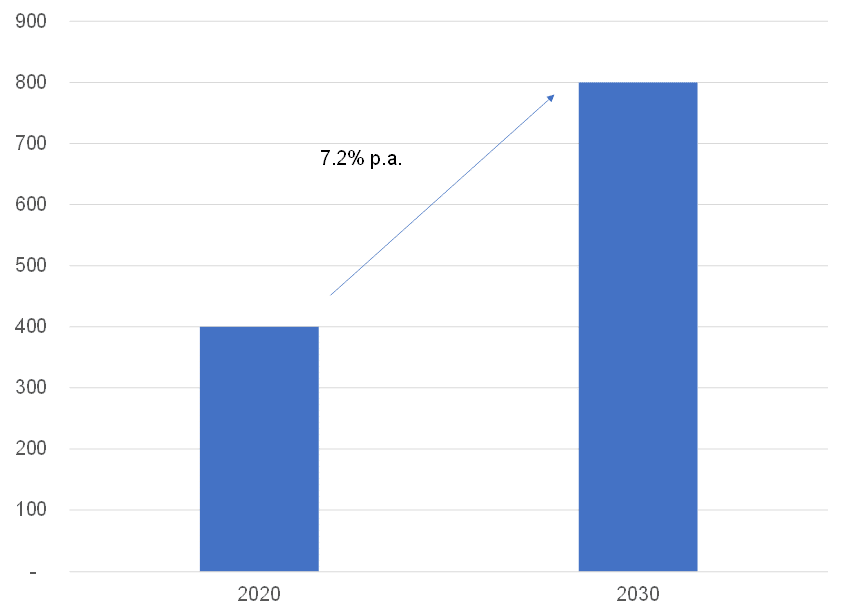 Survey data from Morgan Stanley and AlphaWise suggest that Chinese middle-income consumers are in fact the most prolific purchasers of luxury goods. So, from that perspective, we believe that the process of achieving common prosperity in fact provides a meaningful structural tailwind to luxury goods spending over the next decade. 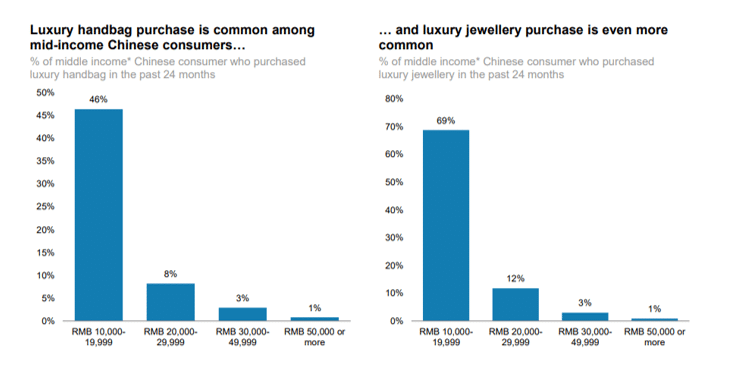 Chinese consumers also tend to start to buy luxury at a lower level of income compared with other nationalities, as illustrated by UBS analysis of luxury penetration by nationality. 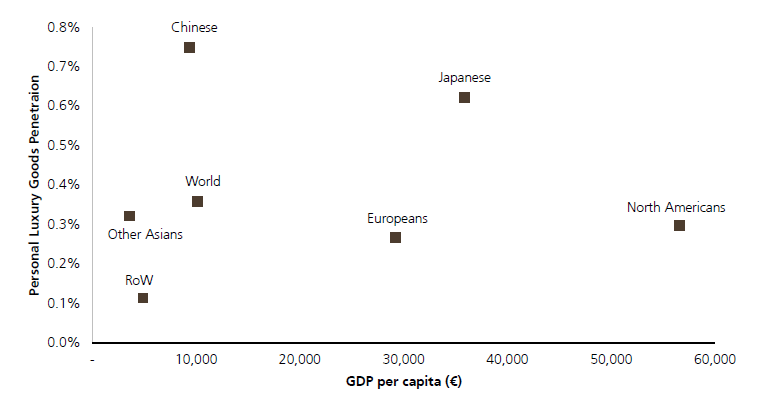 Taxes as a short-term headwind to luxury spending

We expect tax changes to be gradual and the emphasis to be on increasing household income and improving basic public services and social protection rather than major income redistribution. Policy guidelines for Zhejiang’s pilot programme are very much along these lines.

a) Personal income tax represents c. 5% of Chinese tax revenue (relative to the c. 24% average for the Organisation for Economic Co-operation and Development [OECD] countries) and is regressive (i.e., no sliding scale), so this system needs to be reformed, but any implementation is likely to be slow given the broad impact this is likely to have on the population and, by extension, on the popularity of the NPC. Any increased personal income tax burden is unlikely to fall excessively on the middle-income cohort given the government’s goal to incentivise accession into middle income.

b) Consumption tax: The Chinese tax system is heavily reliant on consumption tax (c. 41% of tax revenue relative to the c. 31% average for OECD countries) and coverage is relatively narrow (predominantly alcohol, tobacco, fuel, automobiles, and some luxury goods). The system of collection is heavily skewed towards collection on production/import rather than wholesale/retail. It is likely that this will shift towards a broader coverage of goods and collection at the retail stage, though the impact of this approach is likely to be felt most acutely by lowering the tax revenue in the poorer manufacturing regions, so rollout is again likely to be slow to minimise the impact. From 2018 to 2020, the Chinese government moved to cut import duties on jewellery and increased tax-free allowances in its efforts to support the onshoring of Chinese luxury goods purchases and it seems unlikely that there will be a major U-turn on these policies. 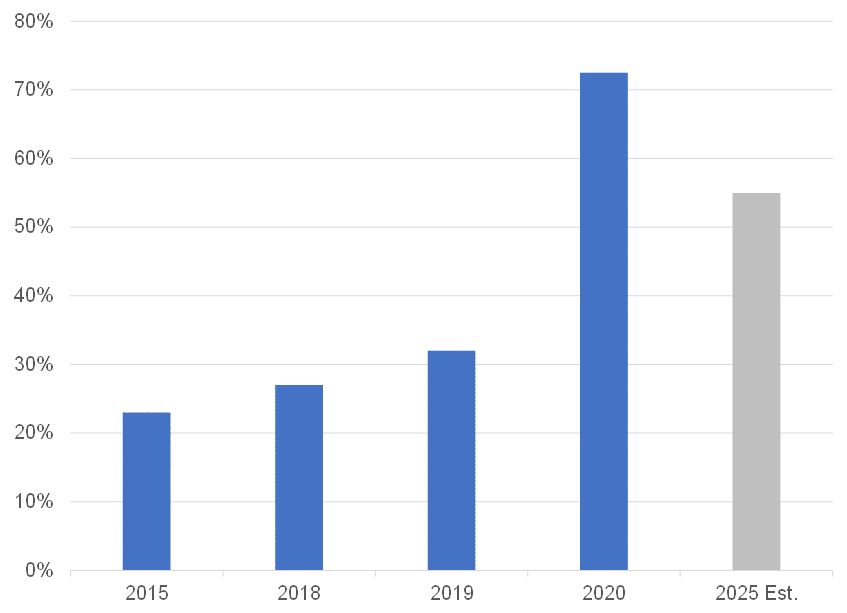 c) Property tax: This is a much-discussed tax, which has been trialled in Shanghai and Chongqing since 2011 but was not discussed in the 2021 NPC meetings and is also not included in this year’s legislative schedule. It is likely that emphasis will pick up pace, but the legislative rollout will take time and it is more likely to be rolled out in select cities than broadly, especially given the c. 90% homeownership rates in China and the widespread impact that a broad nationwide rollout would have. Rollout in select cities is likely to disproportionately impact luxury goods buyers, but most likely in a limited and gradual manner.

Caution on conspicuous consumption as a short-term headwind to demand

The government’s goal of achieving an “olive-shaped” wealth distribution is more focussed on pushing low-income groups into middle-income than shrinking high-income groups. It also seems that the government cares more about how people make their income than preventing them from becoming rich. There is some risk in the short term that wealth accumulated in sectors not aligned with governments objectives may be less inclined to be displayed conspicuously. This headwind is likely to be transitory and replaced by a tailwind from consumption via wealth attained in sectors where the government is encouraging growth.

Over the past 15 years, sales at the luxury goods majors have run at about 1.6x the rate of global nominal growth (when excluding the global financial crisis [GFC] and the corruption crackdown in China in 2015/2016). We assume that this trend will continue going forward, giving us 8%-10% top-line growth for the industry over the next few years.

Figure 8: Sales of luxury goods have grown much faster than global nominal economic growth for the past fifteen years 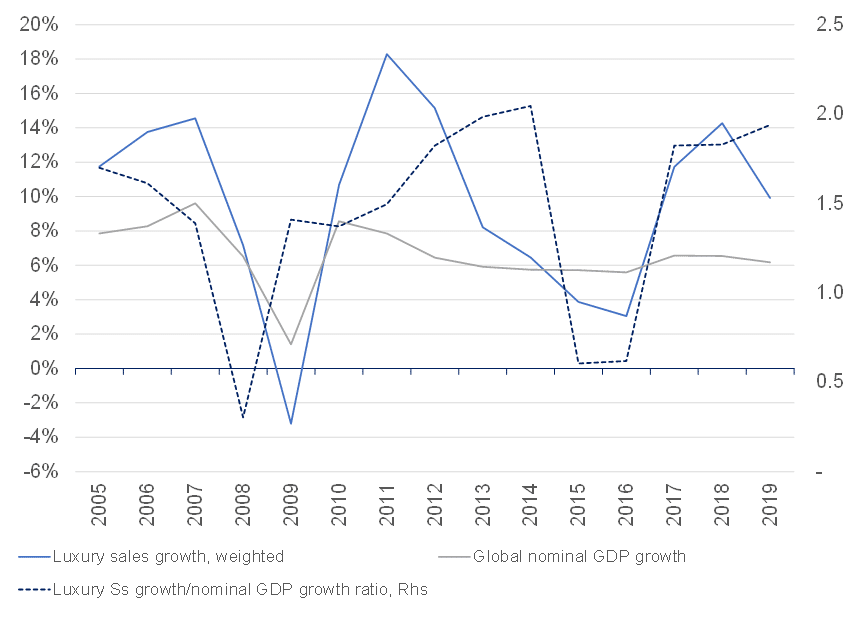 Figure 9: LVMH, Hermes and Kering have a higher proportion of soft luxury goods sales relative to Richemont and Swatch, which are predominantly hard luxury companies 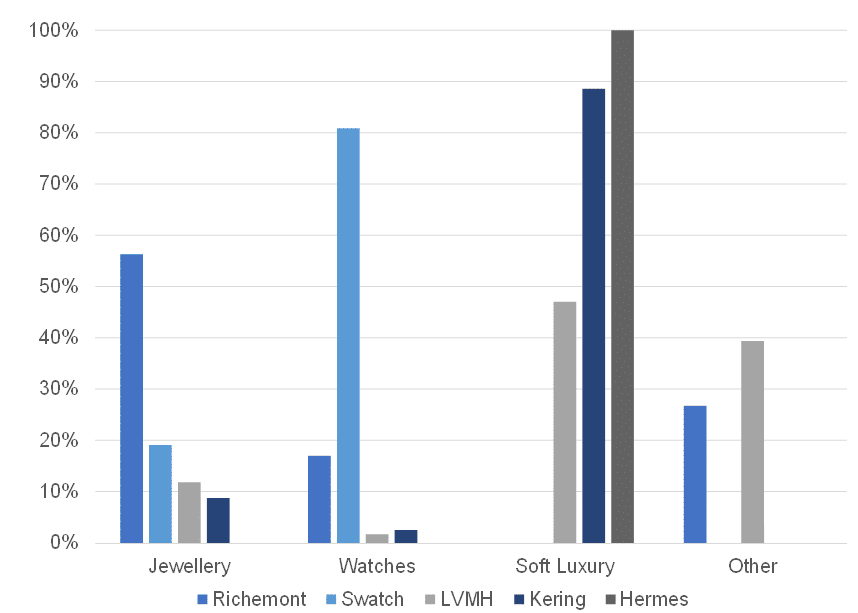 That said, Richemont’s ventures into the online luxury space will give it exposure to the faster-growing soft luxury segment, albeit at a much lower margin than that enjoyed by the brand owners.

Except for Swatch (which trades roughly in-line with its average forward P/E multiple over the past 15 years), the other luxury goods companies are trading at a significant premium to their historic average.

Figure 10: Luxury goods companies are expensive relative to their own history 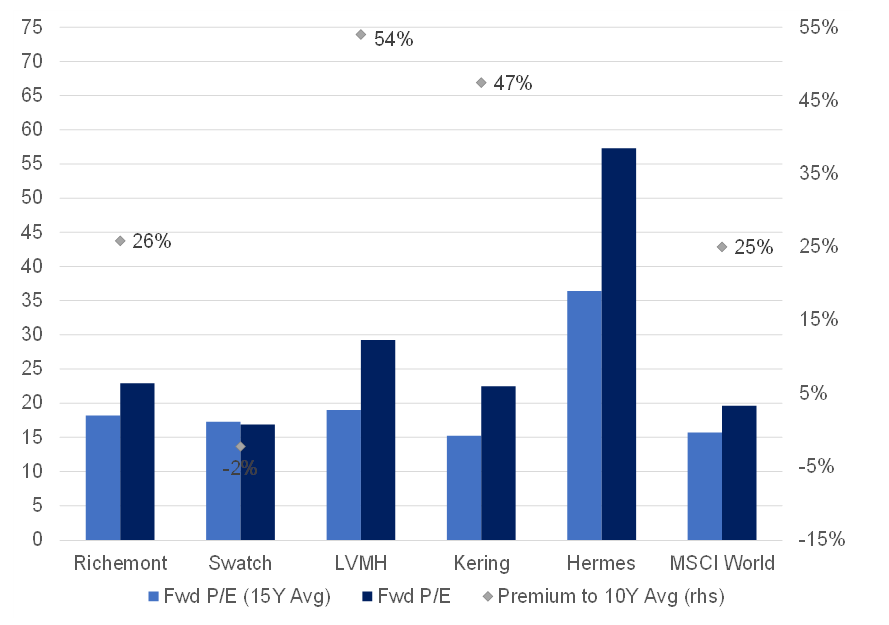 But, with historically low interest rates helping to justify above-average valuations across the market, it is probably more appropriate to compare current valuations to the relative premium that these stocks have traded at historically. 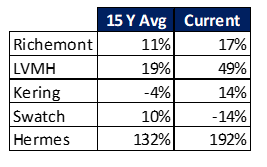 And, in that context, we note that:

Figure 12: The recent sell-off in luxury goods companies has brought their valuation premium relative to the MSCI World Index much closer to their historic average premium levels 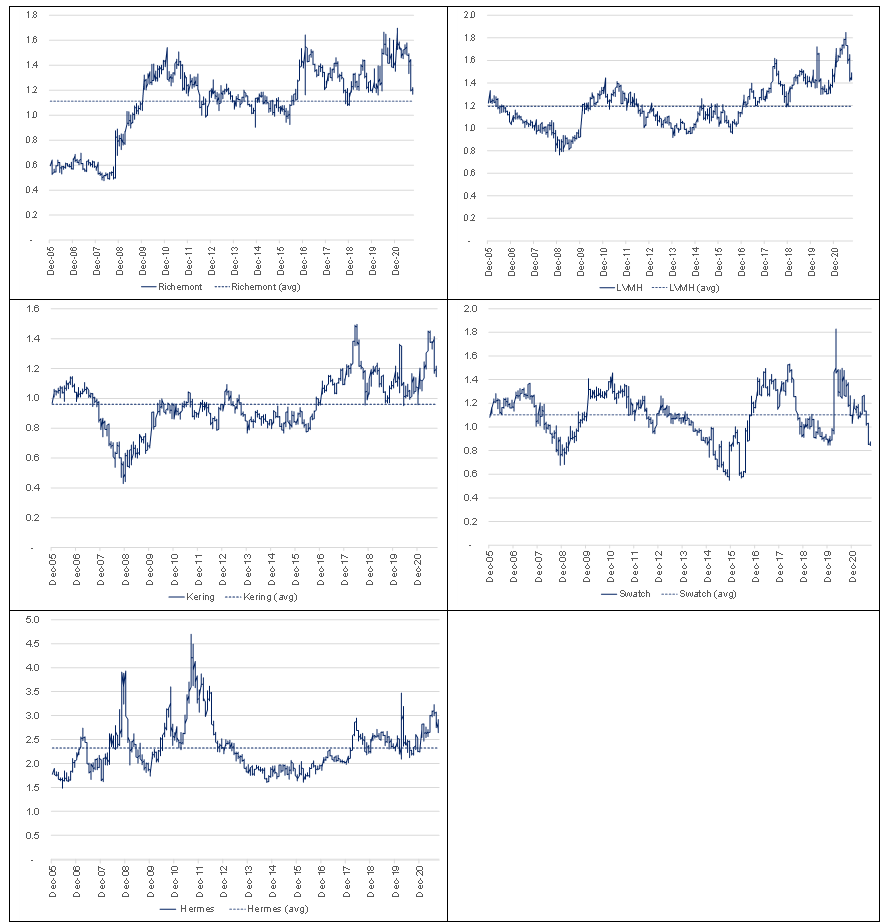 China’s transition towards “common prosperity” will create some short- to medium-term headwinds to the growth in luxury goods sales, but these should be more than offset by long-term, structural growth in the sector driven by an expanding middle-income cohort in China. The recent sell-off has brought the sector to a level where it trades at a reasonable premium to the market, with soft luxury perhaps looking slightly more expensive than hard luxury. As such, the long-term prospects for the sector remain good, while in the short term the sector is likely to trade largely in line with the market.