Below, we initiate coverage on Chegg Inc., a US education technology company that provides student services such as online tutoring, interactive study material, and citation/ anti-plagiarism services to high school and university students in the US and a growing international market. While we are not looking to buy the share at current price levels (the share price has run c. 55% YTD), we do like the story and the company is on our “buy” watchlist for the Anchor Tech Fund.

Chegg is a great example of the growth stories to be found in the US tech sphere when you look outside of the usual headline-grabbing stocks, and it once again emphasizes the importance of researching the broader tech sector. While the share has already performed well, and optically looks very expensive relative to its near-term earnings, the business boasts compelling growth prospects and, we believe, still offers value should these materialise.

Chegg is an online platform business focused on disrupting the extra-curricular/ remedial space in the US tertiary education system. The company, which was previously merely an online retailer of university textbooks (think the US’ version of Van Schaik), recognised several years ago that opportunity lay not in the vending of prescribed material, but rather in providing online, value-added tutoring services, practice exercises and research tools that students can use to process the curriculum. Think about the experience you had with your tutors at university. Chegg simply takes this concept online.

Textbook retailing will only account for around 15% of group revenue in FY19, with the firm having adopted a capital-light agency relationship with textbook vendors in lieu of holding stock. The remaining 85% of its revenue will be generated by high-margin student services (growing at >30% p.a.).

The management team includes Guitar Hero, Yahoo, ZDNet and Netflix alumni, and a General Partner of Kleiner Perkins (a massively successful Silicon Valley venture capital [VC] firm) is a non-executive director on the board.

Worth noting is that Chegg has entered into a partnership with Sallie Mae (the US’ largest student-financing institution), where all financed students receive a bundle of Chegg services with their student loan. 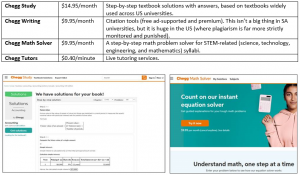 Where is the business currently in the investment cycle?

After growing a base of 3.1mn active annual subscribers on the back of its 4 primary services, the group is now well-positioned to introduce new services (either developed in-house or acquired), that will likely scale up its profitability quickly.

The company is expected to reach breakeven in FY19, with a tremendous level of positive operating leverage going forward (given the largely fixed-cost base). Importantly, the group’s cash generation is fast approaching the point where the business can fund its growth internally.

Chegg’s 3.1m active subscribers have been amassed over a fairly short period of time (see Figure 5 below), growing at around 40% p.a. Given management’s defined addressable market, this still only represents around 5.5% market penetration.

Management are confident that they will be able to reach 10mn active subscribers in the US (with 27% penetration) and a similar number in the international market. We don’t have a high level of conviction as to whether this is a realistic assessment of the addressable market and, hence, we would look for a comfortable margin of error in the valuation. 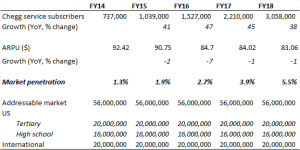 You will notice that almost all revenue growth is driven by user growth, rather than average revenue per user (ARPU). In an effort to increase ARPU, the business is currently experimenting with a bundled offering where Study, Writing and Math Solver (together, $35/month) will be offered for $20/month. Importantly, our thesis does not hinge on ARPU growth. In fact, we have assumed flat ARPU.

2018 was definitely the year where the Chegg story gained traction, with strong subscriber growth sustained at the near-40% level paving a clear path to profitability. Given that the company may well report its first accounting profit this year, and the fact that the business is now 1 or 2 years away from being self-funding, it is to be expected that the share would respond positively.

After trading sideways for 2 years, the share has traded up from $8 to $43 and is now certainly starting to reflect the growth potential of the business.

Naturally, it is uncomfortable to buy a share after such a hard run. However, we still believe there may be upside based on our discounted cashflow (DCF) valuation. The difficult and more important matter to decide on is whether potential upside sufficiently compensates investors for the execution risk. 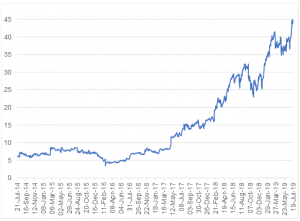 Given that Chegg is in the earlier stages of its lifecycle, modelling earnings growth will come with a high level of forecast risk. By way of example, 11 analysts on Bloomberg are forecasting earnings just one-year out of between USc40-USc70.

The more important assumptions one needs to make are:

Our DCF follows in Figure 7 below: 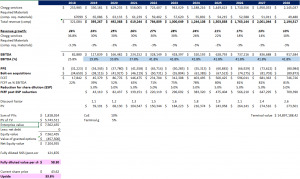 Our primary assumptions when projecting service revenue growth include (see Figure 8 below):

Chegg’s cost structure is largely fixed, with each additional dollar of subscriber revenue essentially falling through to the bottom line. As Chegg’s platform has gained critical mass, the group’s margins have obviously improved dramatically – gaining around 700bps p.a.

On our call with management, they guided us to slowing margin expansion (400bps) over the next 2–3 years as they invest in further growth initiatives. We have assumed a terminal adjusted EBITDA margin of 40% within 4 years, which will put Chegg in the middle of the pack of internet platform businesses (see Figure 10). 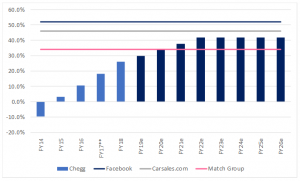 Naturally, a growth business making marginal losses will need to fund its growth with external capital.

We have not assumed conversion of the $700mn. This would naturally result in some dilution 7 years hence, assuming the share has appreciated above this level ($79).

If one adjusts for the value of the convertible option, the effective pre-tax cost of debt financing for the group is 5%.

The company currently sits on net cash of around $200mn, and thus financial leverage doesn’t represent a risk to the business. From our discussion with management, it emerged that current resources should be sufficient to fund growth over the next 2 years, at which point we project the business will be close to self-funding.

Our suspicion, however, is that management will seek to raise additional capital to fund new growth opportunities (organic/ acquisitive) through further convertible bond issues and one will need to trust that management are able to balance incremental growth with the dilution.

Currently, 15mn shares (10% of shares in issue [SISS]) have vested and is in the money, while a further 26mn (23% of SISS) in notional shares have been made available for the scheme. We have accounted for the vested shares in the equity valuation of the business, and we have factored a 5% annual dilution into our DCF for future incentive payouts.

We are concerned that such aggressive incentivisation may drive strategic decisions that err on the risky side, and perhaps an element of “short-termism” could creep into the senior culture. Again, this is probably a risk that one needs to bake into the required prospective return before buying the share.

Ability to raise capital: The company has obviously been able to raise capital fairly easily on what seem to be favourable terms. The firm’s ability to refinance this on similar terms in the future may be diminished in a less positive economic environment.Although the effective interest rate of the convertible debt is probably a market-related rate, we are concerned that covenants may constrain an earlier-stage growth business such as Chegg, where debtholders are required to take a view on the prospects of the business (rather than current EBITDA).

New entrants to market: Management tell a good story around the difficulties, which competitors would encounter in trying to build out a similar base of content that would be needed to compete with Chegg. Their comment to us was that it would in fact be cheaper to just buy Chegg!We are more sceptical here, as there are many firms in Silicon Valley with sufficiently large balance sheets that could scale up fairly quickly in this space.

The company counts Baillie Gifford, one of the more successful, better-known growth tech managers, as a core shareholder (9%). Management also collectively own 5.8% of the business.
Interestingly, although Baillie Gifford were early-stage investors in this business, it did not sell down in the IPO. 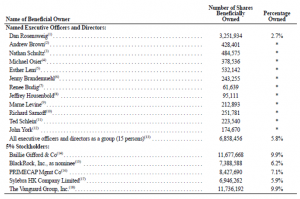 Chegg is a great example of an early-stage disruptor that boasts exciting growth potential, but also faces a high level of execution risk. As an investor, if you’re going to take the leap of faith and give management the benefit of the doubt on the execution front – you will want to be compensated with an outsized prospective return.

Given the other opportunities we’re seeing among the earlier-stage growth stories in the tech space (e.g. Spotify), we would want a prospective return of >50% from Chegg before being comfortable enough to start buying (i.e. an entry price of sub-$40/share) and, unfortunately, we’ve just missed the bus on this one after a 55% YTD rally in the stock.

This is definitely a share we’ll be watching closely though, and it is probably more likely than not that a disappointing quarter in the near future will give us the opportunity to start building a position at the right price.