Apple reported impressive 4Q18 results on Thursday (5 November), with both earnings (+40.6% YoY) and revenue (+19.6% YoY) coming in above expectations. Diluted EPS of $2.91 was above the $2.78 expected by a Refinitiv consensus estimate, while revenue of $62.9bn was also ahead of the Refinitiv consensus forecast of $52.34bn. In 4Q17, Apple reported revenue of $52.6bn and earnings of $2.07/share. A striking average selling price (ASP) of $793 (+28% YoY) is significantly higher than the $724 it reported in the prior year’s June quarter and was also above the FactSet estimate of $750.78. However, iPhone shipment estimates were below consensus expectations (46.89mn vs 47.5mn expected), Apple’s guidance disappointed and the firm announced major changes to its reporting structure which saw the share price drop by over 7% in after-hours trading to below its $1trn market cap. Apple said on the conference call that starting in 1Q19 it would no longer break out individual sales numbers for the iPhone, iPad and Mac – these will be wrapped into one reporting number.

The Services segment reported revenue of $9.98bn – up 27% YoY, but slightly below consensus estimates of $10.2bn. This category includes revenue segments such as App Store sales, Apple Music subscriptions and iCloud storage. Services revenue also includes the company’s digital payments system, Apple Pay, which Apple said had surpassed PayPal mobile in transactions during the quarter under review. CEO Tim Cook highlighted on the earnings call that the installed base for all Apple’s major product categories is “at an all-time high.”

Apple’s Other Product revenue (HomePods, AirPods and Apple Watches), came in at $4.23bn – up 31% YoY. We note that Apple doesn’t break out specific revenue figures for wearable devices, but the firm said that this category grew by 50% YoY.

Looking ahead, Apple guidance for next quarter (1Q19) disappointed, coming in as follows:

Apple announced a dividend of $0.73/share, payable on 15 November.

Apple’s share price closed at $203.77 on Tuesday (6 November) but the share price is down 8.3% since its Thursday (1 November) close (before the results were released). The share is currently trading at a 17.2x PE.

Apple reported double-digit YoY revenue in all of its geographic segments with Japan leading the charge as it recorded 33.8% YoY revenue growth, while the Rest of Asia Pacific (ex. China) was up 22% YoY. Importantly, China again recorded impressive sales with the Greater China region posting double-digit sales growth with revenue of $11.4bn (+16.4% YoY, +19% QoQ) – good news for the company’s China business. On the conference call, Cook said that Apple’s business in India was flat. He pointed to currency weakness as well as import duties on most of its products as part of the challenge in that country but said that he was a “big believer” in India and “very bullish” about Apple’s future there. 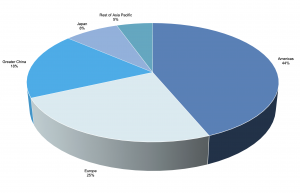 By segment the company reported the following: 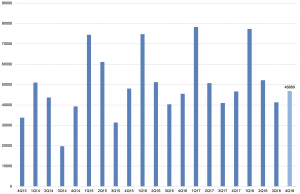 Services (16% of revenue vs 18% in 3Q18):Services revenue, which includes the App Store, iTunes, Apple Music, Apple Pay and iCloud, was close to $10bn (the segment’s highest quarterly revenue to date) -up 5% QoQ and 17% YoY (Apple also noted that it shipped its 2 billionth device running iOS in the quarter). This was also the 14th quarter in a row where the Services segment’s growth has been in double figures. During the period, Apple said it tripled its Apple Pay transaction volumes YoY, while Apple Music and the App Store also achieved quarterly records. CFO Luca Maestri said that the company wants to double services from 2016 by 2020, and Apple is still on pace to achieve that.

Other Products (7% of revenue unchanged from 3Q18):This segment, which includes the Apple Watch, Airpods, headphones, other accessories, Apple TV (and iPod), and the HomePod smart speaker recorded revenue of $4.2bn (+31% YoY). This segment will be renamed to “Wearables, Home, and Accessories” going forward.