Apple reported 1Q19 results on Tuesday (29 January), which came in slightly above consensus analyst expectations. The firm’s share price has been under pressure since October (down c. 33% over the past three months since its early October highs), following a series of disappointing iPhone sales numbers, and a lowered revenue outlook from the company at the start of this year, which has dented investor sentiment towards the tech giant.

Tuesday’s earnings also marks the first time that Apple is not breaking down unit sales by iPhone, iPad, and Mac categories. With final results out, Apple reported $84.3bn (c.-5.0% YoY) in revenue (in line with its early January preannouncement that called for $84bn in revenue for 1Q and just above consensus analyst expectations of $83.97bn) and $19.97bn in profit during the holiday quarter, vs $88.3bn in revenue and $20.1bn in profit for 1Q18. EPS of $4.18 (an all-time record) was USc1 above what consensus analysts had expected.

Looking ahead, Apple forecast revenue between $55bn and $59bn for 2Q19 – another YoY decline. The share price gained in after-hours trading – up c. 5.7% and currently trading at around $163.50/share.

Apple CEO Tim Cook noted in the earnings release that despite the disappointment of missing earlier revenue guidance, Apple’s active installed base of devices “reached an all-time high of 1.4bn in the first quarter, growing in each of our geographic segments” (Apple’s total active installed base of devices stood at 1. 3bn at end-January 2018). According to Cook it reached “… a new all-time high for each of the main product categories and for all 5 of our geographic segments.” Cook added that this was “ … a great testament to the satisfaction and loyalty of our customers, and it’s driving our Services business to new records thanks to our large and fast-growing ecosystem.” He highlighted that the company’s iPhone results accounted for significantly more than “our entire year-over-year revenue decline.” Adding that, outside of iPhone, Apple’s business grew strongly by 19% YoY. Several times during the earnings call Cook said that foreign exchange (forex) was the number-one reason for the iPhone decline.

CFO Luca Maestri also noted that the global active install base of iPhones continued to rise and reached an all-time high at the end of December- surpassing 900mn devices, up YoY in each of Apple’s five geographic segments and “growing by c. 75mn in the past 12 months alone.” This was the first time this number was disclosed.

Apple sales declined in China (-26.7% YoY), Japan (-4.5% YoY) and Europe (-3.3% YoY). Greater China revenues came in at $13.17bn, down c. 27% YoY or c. $4.8bn from $17.96bn in 1Q18, with declines across iPhones, iPads and the Mac categories. Despite iPhone upgrades being lower than anticipated, Cook noted that the other businesses grew outside of China. He highlighted that the firm saw the following positives in China – record services revenue and a strong wearables performance with revenue in the wearables category up 50%-plus YoY. Also, more than two-thirds of Mac and iPad buyers in China during the quarter were first-time buyers. Maestri added that China refusing to approve new video games affected its business there in the quarter. Cook highlighted several markets where revenue grew by double-digits, including among others, Germany, Spain, Poland, Mexico, Malaysia, and Vietnam, while revenue records were recorded in the US, Canada, and “several other developed markets.” 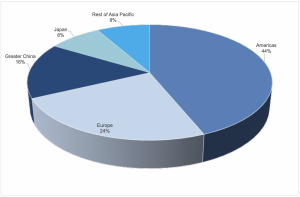 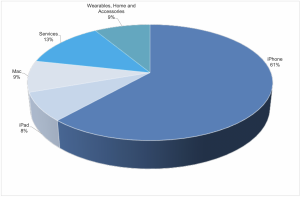 We note that Apple provided year-ago figures which have been updated to the new revenue-recognition rules that Apple adopted in its new fiscal year (this change took software and services revenue from a slight miss to a slight beat).

iPhone (61% of revenue vs 59% in 4Q18): In the quarter under review, iPhone revenue declined c. 15% YoY to $51.98bn. We note that with the lack of unit sales we can no longer ascertain an average selling price (ASP) for the products – a key metric that shed light on the rising price of iPhones. The global active install base of iPhones surpassed 900mn devices, up YoY in all five geographic segments and up 75mn in the past 12 months. The company noted that retail stores doubled the volume of iPhones traded-in over last year due to its trade-in campaign.

Services (13% of revenue vs 16% in 4Q18): Services revenue, which includes the App Store, iTunes, Apple Music, Apple Pay and iCloud, came in at c. $11bn (the segment’s highest quarterly revenue to date) – up 19.1% YoY. Services is on track to double 2016 revenue by 2020, the company said. This was also the 15th quarter in a row where the Services segment’s growth has been in double figures. There were 1.8bn Apple Pay transactions in the quarter, a record quarter for the App Store Apple Pay, Cloud Services, and App Store Search Ads. This was the first quarter in which Apple disclosed the gross margin of its services segment: 62.8%, up from 58.3% a year earlier. It was also an all-time high of transacting accounts on digital stores, 360mn paid subscriptions across its Services portfolio with Apple forecasting 500mn-plus paid subscriptions in 2019.

Wearables, Home and Accessories (previously Other Products: 9% of revenue vs 7% in 4Q18): This segment, which includes the Apple Watch, Airpods, headphones, other accessories, Apple TV, and the HomePod smart speaker recorded revenue of $7.3bn (+19.1% YoY). Products gross margin was 34.3% and Cook said that on a sequential basis, the “products gross margin increased 60 bpts due to positive leverage from the holiday quarter, partially offset by higher cost structures as we launched several new products and by headwinds from FX.” The Wearables business is approaching the size of a Fortune 200 company and wearables revenue alone was up 50% YoY.

While media reports have suggested that Apple is launching a streaming TV and movie service this year, nothing new was said on the call with Cook stating that Apple has signed a multi-year partnership with Oprah and adding that “Today I’m not really ready to extend that conversation beyond that point. We’ve hired some people we have a super amount of confidence in. They’re working on that really hard. We’ll have more to say on that later.”