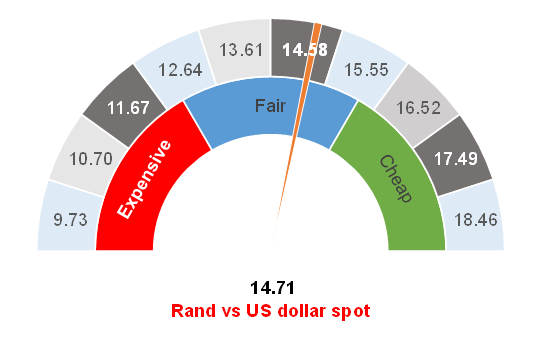 The tragedy of last week’s looting and unrest will forever be etched in our collective memories and history books. If poverty, inequality, rising unemployment, and lockdowns were the tinder, then the incarceration of former President Jacob Zuma was the spark that ignited an inferno that engulfed KwaZulu-Natal (KZN) and parts of Gauteng during the week of 12 July 2021. It seems clear to us that this was a preplanned and coordinated attack on the very fibre of our young democracy. While some might see it as a desperate last gamble from those who, over the past decade or more, used their political offices for self-enrichment, the eventual outcome was that the rule of law prevailed. There is now a clear message that politicians (and others in society) who abuse their positions of power for personal gain will indeed face jail. Perhaps, just perhaps, South Africa’s (SA’s) young democracy is maturing.

We, like everyone else, are still assessing the impact that last week had on our country. Economists expect that SA’s economic growth will be stunted and about 0.5% lower than had previously been forecast. Society will be skittish, and some investment capital and skills are likely to emigrate over the coming months. Perhaps the most dire and difficult to assess though is how much these events have dented SA’s attractiveness as an investment destination and the potential loss of fixed investment that will create the jobs and the infrastructure that SA so desperately needs. Certainly, the long-term cost of capital in our country will be higher than before. There are also concerns that the government’s knee-jerk reaction to this will result in increased socialism, which is unaffordable for SA and will, in and of itself, perpetuate the cycle of job losses as an already overtaxed middle-class lose hope in the country and leave.

Against this backdrop, there nevertheless remains some positives relating to the strength of the institutions in SA. The government has acknowledged the independence of the judiciary and, even in the face of strong political pressure to pardon the former president, politicians have not interfered with the judiciary – as the Latin legal phrase goes Fīat jūstitia ruat cælum – “Let justice be done though the heavens fall.” In the context of the extreme destruction that has taken place, the loss of life was, fortunately, limited. There was an element of “restraint” on the part of the looters. Perhaps most telling, the gentle approach of the SA Police Service prevented a repeat of the Marikina tragedy (where 34 miners were killed by police in 2012), which would have resulted in a far worse outcome for SA.

Clearly mistakes were made by the Justice, Crime Prevention and Security Cluster, however, we also note that SA is not a police state like much of the Middle East, Africa and parts of Eastern Europe. We take comfort in the fact that the police were not used to ruthlessly crush civilians and that the steps taken were with a view towards defusing the violence rather than escalating it. The police are now dealing with the culprits through the courts, much like they do for rioters and looters in countries like the UK and Australia. Surprisingly, Apartheid was not blamed for this by politicians or even by the looters. It appears that the current crop of politicians are owning up to some of the present policy failings that are holding the country back. Most importantly though, after a time of great sorrow, comes a time of great healing as we see people of all colours, creeds, and walks of life engaging together in the cleanup process.

Anchor has stated before that we are not supportive of a basic income grant in SA. Even if it were affordable, we think that the benefit for society would be greater if government were investing, for example, R200bn p.a. more in infrastructure, small and medium-sized enterprises’ (SMEs’) skills development and improving the quality of our education system. This option will reap future dividends for our country that are far greater than yet another social grant. What would be more wonderful than starting a process of replacing the nearly 1mn jobs that were destroyed through the various lockdowns?

Our primary role though is to assess the impact on the investment landscape. As SA was experiencing civil unrest, the global environment was undergoing a massive risk-off sentiment due to the potential impact of the more contagious COVID-19 Delta variant. We have seen the US 10-year bond yield scream lower to just above 1.1%. The risk-off environment has also strengthened the US dollar, which was trading at US$1.188/EUR on 9 July and is at US$1.176/EUR on Wednesday (21 July), with the US dollar c. 1% stronger over the aforementioned period. The rand is a high-beta currency and is also very exposed to global growth expectations. Rand weakness of about 2% to 2.5% is to be expected from global developments over the recent period and the rand has weakened from R14.34/US$1 to R14.71/US$1 over the same period (as the euro), which is c. 2.5% lower. No matter how you look at it, global developments account for most of the rand’s movements over the period. SA’s homegrown problems seem to have had a rather minor impact on the local unit. We have seen the same theme play out in bonds, where foreigners have been net buyers of bonds since 9 July.

If the rand is taking its cues from current global events, then we should consider those events in looking at the fair value of the rand. Globally, we are seeing a resurgence of COVID infections as the Delta variant spreads rapidly, leading to fears that lockdowns might not be over and that the current expectations for global economic growth might be overly optimistic. This is manifesting as lower US bond yields, lower US equity prices, and a stronger dollar. Anecdotal evidence suggests that the vaccines do not entirely eliminate COVID, but rather reduce the risk of going to hospital or death. We have seen that the hospitalisation of vaccinated people is significantly less than that of unvaccinated people. Anchor’s view is therefore that the current pessimism is likely to prove unfounded. We believe that global share prices should recover, US bond yields should rise, and, consequently, the dollar will weaken once again. This will look like a recovering rand from a South African perspective.

Looking at the rand, our fair range remains R14.50-R15.00/US$1, notwithstanding the mayhem in SA of the past week or so. The rand is currently within our fair range but has pushed to the upper-end of that range. This is against our expectations, which were for the rand to hover towards the bottom of the range. As the strong global forces which are weakening the rand dissipate, we see some scope for the currency to recover to below the mid-point of our fair range. SA’s current account surplus, which we have been speaking about, will continue to support our currency. From a portfolio strategy perspective, we have not reacted to the slight weakness in the rand and we are maintaining the positions that we had prior to the week of 12 July. 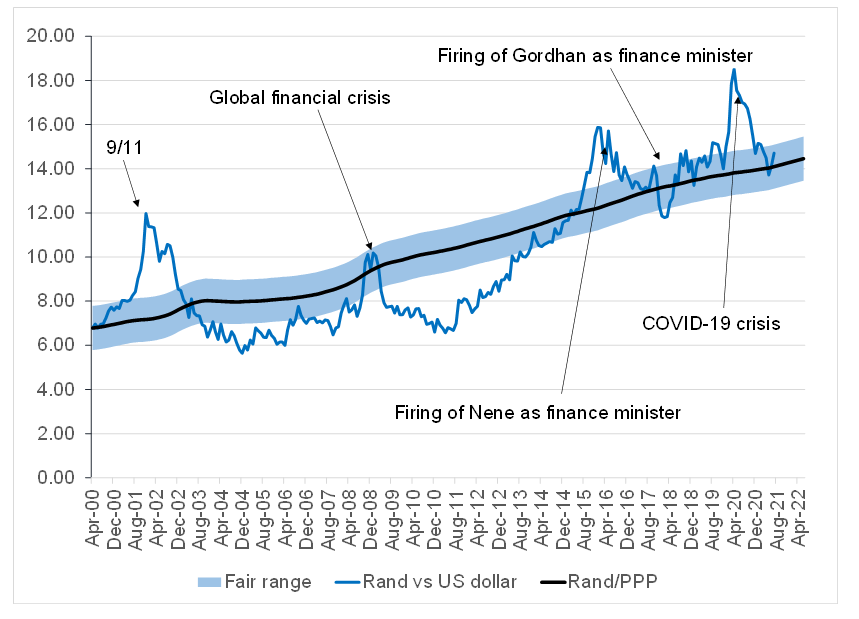